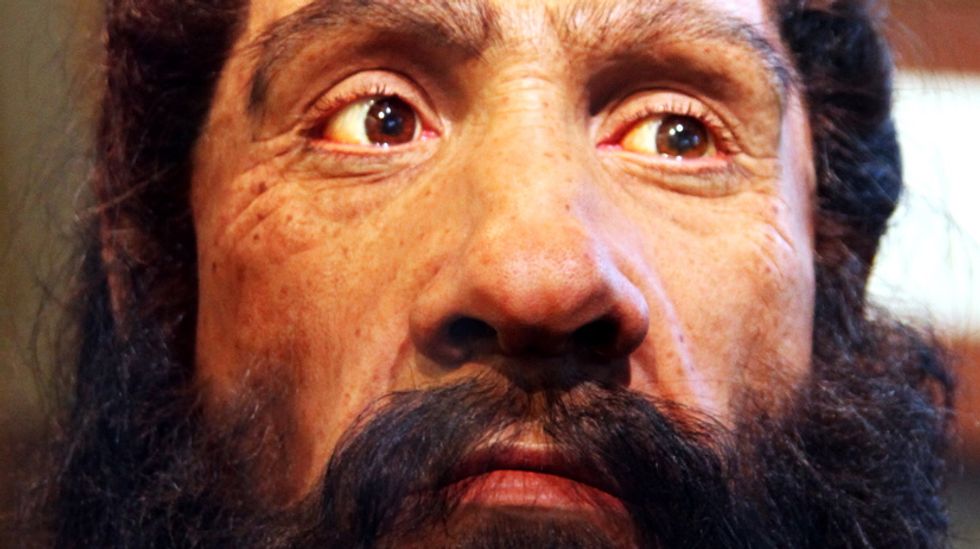 Should you find yourself in the Natural History Museum between now and the end of September, wander past the diplodocus to the back of the central hall and turn left to make your way to the Jerwood gallery. In there, you'll find an astonishing collection of stone tools, cut-marked bones and other evidence of the one million years of human habitation in Britain.

I was in there last week, and found myself face to face with a Neanderthal. He's a very real-looking Neanderthal. He's shorter than me, very stocky, and although he's got a deep brown tan on his face, arms and upper chest, the rest of his torso, usually covered up with clothes in the cold north, is pale. His dark, coarse hair is pulled back under a strip of leather. I got quite close to this Neanderthal, until I saw the texture of his skin and the glint in his eye, and I was ever so slightly afraid that he was going to blink. Neanderthals, of course, were in Britain long before modern humans – Homo sapiens – arrived.

Neanderthals had been living in Europe, western Asia and the Middle East, for a good 150,000 years before modern humans colonised these areas. They were distant cousins, but a separate species. The question of what happened when modern humans and Neanderthals met, if indeed they did meet, has inspired stories such as William Golding's The Inheritors as well as sparking scientific debate.

If you'd asked me five years ago whether modern humans and Neanderthals interbred, I'd have said: probably not. I wasn't convinced by the handful of skulls and skeletons which had been suggested to be "hybrids". And at that point, analysis of ancient DNA had also failed to show any evidence of ancient liaisons.

A team in Leipzig, led by Svante Pääbo, had pioneered the extraction and sequencing of mitochondrial DNA from Neanderthal bone fragments, and this DNA showed a clear separation from modern humans, around 500,000 years ago, with no evidence for any subsequent interbreeding. As the team started to analyse the much larger archive of genetic information from Neanderthal chromosomes, there was still no evidence of interbreeding.

Then, in 2010, Pääbo and his colleagues published a game-changing set of results: a draft Neanderthal genome, based on DNA from three individuals. They had compared the Neanderthal DNA with that of five living humans: they found similarities between the DNA of Neanderthals and present-day Europeans and Asians, which were absent in Africans. The most likely explanation was that, as the human population spilled out of Africa, the colonisers had interbred with indigenous Neanderthals. Things were starting to look interesting.

A particularly unexciting-looking toe bone from a cave site in Siberia, dating to 30,000-50,000 years ago, provided the next ancient genetic revelation. The DNA extracted from the bone was clearly not modern human in origin, but it wasn't Neanderthal either. For now, these mysterious ancient people are just called the "Denisovans", after the cave where the toe bone was found. The Denisovans also seem to have interbred with modern humans: fragments of Denisovan DNA are found in the genomes of living Melanesians.

By the end of last year, with an ever-growing sample of Neanderthal genomes, geneticists had identified three to five instances of gene flow between different populations: between Neanderthals and modern humans, Denisovans and modern humans, and between Neanderthals and Denisovans. There even seems to be an input into the Denisovan genome from an even more ancient lineage – which might turn out to be Homo erectus. Although the flow from one genome into another is quite small, a few per cent at most, there's now clear evidence for interbreeding between ancient populations.

As to what the Neanderthal and Denisovan contributions are doing in our genomes, we're just starting to find out. Some variants of genes involved in the immune system could have led to improved immunity, producing a sort of "hybrid vigour".

Interbreeding may also have introduced genes which led to lighter skin colour in Europeans, which can be beneficial for vitamin D production in northerly latitudes with weak sunlight. In other cases, it seems to be doing something quite unhelpful, at least, in a modern context. Some Neanderthal genes are linked to an increased risk of type 2 diabetes, Crohn's disease and cirrhosis of the liver. Neanderthal DNA pops up very sporadically in modern genomes, suggesting that it has been cleared out of some areas, probably because it caused problems for carriers. In other words, natural selection has already purged quite a bit of DNA out of modern genomes. In particular, the lack of Neanderthal DNA on the X chromosome might be because it caused a degree of male infertility – a major barrier to passing any genes on. In fact, it's estimated that more than half of the original Neanderthal contribution to modern genomes has been eradicated.

Having recently sent off my own DNA, from a cheek swab sample, for analysis, I know that I have a relatively high proportion of Neanderthal DNA in me: 2.7%. Five years ago, I'd have looked at that Neanderthal in the Natural History Museum and felt 500,000 years of separation between us. Now I know we've got much more in common. I'm living proof of modern humans interbreeding with Neanderthals. I took a selfie with him and quickly moved on.