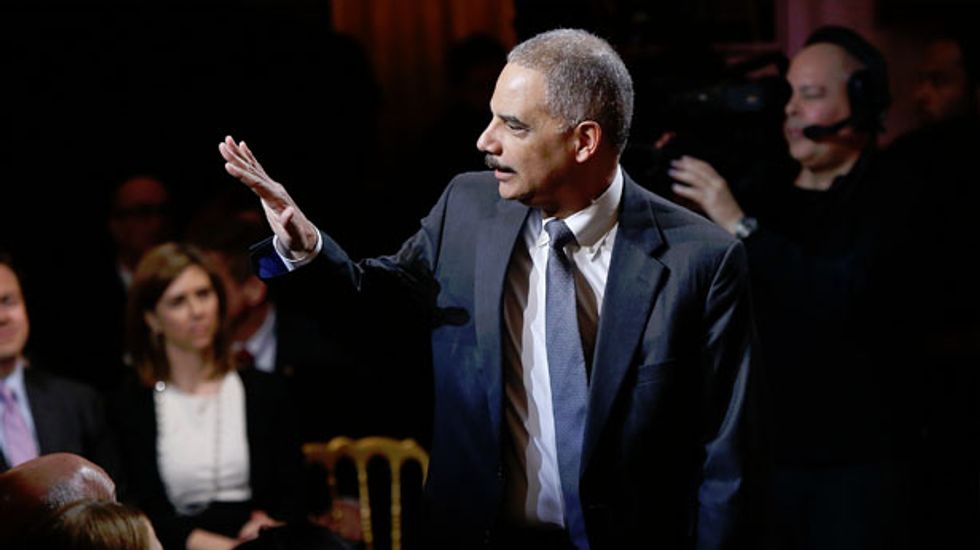 WASHINGTON (Reuters) - The Obama administration on Thursday plans to throw its weight behind a proposal that it says could cut the average prison sentence for a federal drug defendant by 11 months, a change designed to help reduce the massive U.S. prison population.

Attorney General Eric Holder is scheduled to endorse the idea in a speech to the U.S. Sentencing Commission, a government body that guides federal judges on how long they should sentence people convicted of crimes.

Holder is scheduled to speak at 9 a.m. EDT in Washington.

The United States keeps a larger proportion of its population behind bars than any other country except the Seychelles, according to the International Centre for Prison Studies in London.

The proposed changes would occur within detailed tables that indicate how many months or years a defendant should get. Holder's office says the impact could be wide, affecting about 70 percent of federal drug trafficking defendants in future cases if the commission adopts the proposal.

"Certain types of cases result in too many Americans going to prison for far too long, and at times for no truly good public safety reason," Holder will tell the commission, according to an excerpt of his speech released ahead of time by the Justice Department.

Federal judges have some discretion to sentence defendants as they see fit, but they are given a 590-page manual for advice.

According to the current manual, someone convicted of a crime involving 500 grams (18 ounces) of powder cocaine might be expected to get a prison sentence somewhere between 63 and 78 months depending on additional factors. Under the proposal, the expected sentence for that person would drop to a range of 51 to 63 months.

The average sentence imposed on federal drug offenders would fall to 51 months from 62, a reduction of 18 percent, according to an estimate provided by the Justice Department.

The federal prison population would fall by about 6,550 inmates over five years, the department said.

The seven-member Sentencing Commission could vote on the proposal as soon as April, after it finishes receiving public comments. The proposal, if adopted, would not affect past cases.

The U.S. Congress, which passed mandatory minimum sentences and related laws in the 1980s and 1990s, has the authority to block the commission proposal, but political support for lengthy prison terms has weakened lately.

In a reflection of growing bipartisan interest in the issue, Democrat Dick Durbin of Illinois and Republican Mike Lee of Utah are co-sponsoring legislation in the U.S. Senate that would cut some mandatory minimum sentences in half.

A senior member of President Barack Obama's cabinet, Holder has for months pushed lawmakers and his own prosecutors to rethink long, mandatory prison terms, which he argues lead to spiraling prison costs and damaged families.

One in 28 U.S. children has a parent behind bars, according to Holder's prepared speech.

Only the Seychelles, an Indian Ocean archipelago, tops the United States at 709.