Obama and Obamacare could doom Democrats in November 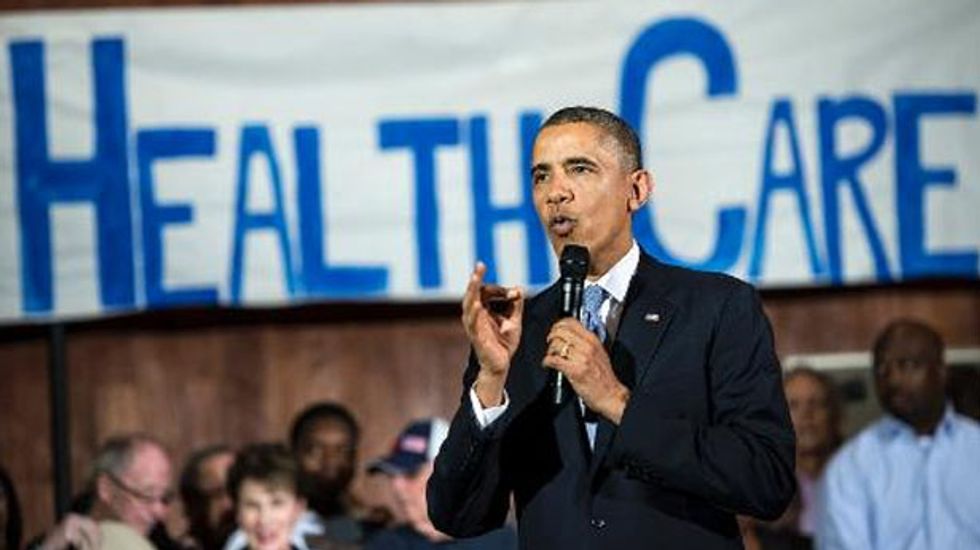 His name is not on the ballot, but with Republicans on the rise, Barack Obama has a strong incentive to battle hard for Democrats in November's mid-term elections.

But the president who twice carried his party to the White House may struggle to find a candidate willing to stand with him.

His diminished personal brand and the unpopularity of his health care law are becoming millstones to Democratic candidates -- even as he warns the party faces a walloping unless its activists wake up.

Obama often complains that Congress has thwarted his plan to grow the economy since Republicans seized the House of Representatives in 2010.

But the past will be but a grim prologue of his final two White House years if, as appears to be increasingly likely, Republicans grab the Senate in November.

With a unified Republican Congress, Obama would have only a veto pen to protect his legacy. He could also face a torrent of congressional probes and scrutiny designed to exhaust his administration.

A new NBC News/Wall Street Journal poll this week showed why Obama may be a liability for Democrats on the stump.

His approval rating dipped to 41 percent, a new low -- and his disapproval number among Democrats climbed to 20 percent -- casting doubt on hopes he could boost Democratic turnout.

Republican pollster Bill McInturff told NBC News the president was being "taken off the field" for November.

Unpopularity is nothing new for second-term presidents.

Six years in, most administrations are low on gas, have seen their brightest stars depart and are often ravaged by scandal.

In Obama's case, the health care law that cost so much capital to pass remains a political liability.

And Republicans, who need six seats to recapture the Senate, have fertile territory on which to work.

Democrats are vulnerable in states including Alaska, Arkansas, Louisiana, Montana and North Carolina -- all of which Obama lost to Mitt Romney in his stroll to re-election in 2012.

It is no small irony that several sitting senators who are now wobbling rode the Obama wave to the chamber during his euphoric election win in 2008.

Republicans have devised a simple strategy, designed to inflate their own turnout in November: link all Democrats to Obama and Obamacare.

In Louisiana, Senator Mary Landrieu is being torched by advertisements branding her an enabler of the law.

"Why didn't she do her job -- protect us from Obamacare at the start?" says one new ad paid for by Americans for Prosperity, a conservative advocacy group.

Landrieu responds that Obamacare, for which she voted, must be fixed and proposed a bill to allow people who had health plans cancelled under the new law to keep them.

But that distancing strategy may not be enough to beat her likely rival, Congressman Bill Cassidy, who as a physician opposed to Obamacare comes direct from Republican central casting.

Two recent polls have Landrieu down four points -- a tough spot for a senator from a Louisiana political dynasty who is universally known in the state.

Pryor's vote for the law in 2009 glued him to the president in a state where Obama is unpopular and he is the only Democrat on the congressional delegation.

"I'll be the first to tell you, this law is far from perfect... It's needs some fixes," he said, trying out a distancing strategy in August.

Democrats have long hoped that the Affordable Care Act would become less unpopular as it came into force.

But polls show that while Americans like some individual aspects -- a ban on insurance companies refusing to cover people with existing illnesses for instance -- the law remains toxic.

The NBC poll found 35 percent of people thought the law was a good idea. A recent CNN survey found 39 percent favored Obamacare, while 57 percent opposed it.

A rise in Obamacare's popularity before November that could spike Republicans guns meanwhile seems unlikely.

The potential political toll of the law was highlighted when Democrats hung onto a House seat in Florida in a special election dominated by health care.

Democrat Alex Sink lost to Republican David Jolly, in an election seen by both parties as a test run for November.

Democrats "embraced Obamacare. They realized that message was bad, so then they knocked the rollout," Jolly told Fox News.

"Then they worked on this message of let's fix what's broken and keep what's working -- they never wanted to talk about the substance of Obamacare and why it was wrong."

Democrats dispute the idea that the Florida House race is a bellwether.

"I don't take a mandate from this," White House spokesman Jay Carney said.

But the low Democratic turnout seen in Florida could doom party candidates nationwide and is apparently vexing Obama.

"It's during these midterms where we end up getting ourselves into trouble, because I guess we don't think it's sexy enough," Obama said last month.

He doubled down last week, warning that if Democrats "tune out... we get walloped."