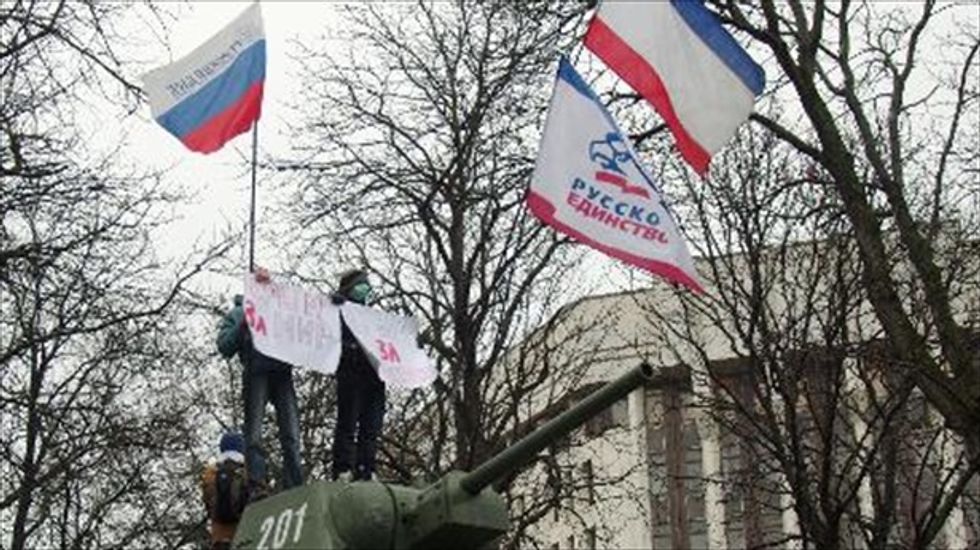 Pro-Russian demonstrators hold placards reading 'Crimea for peace' as they stand on a T-34 Soviet tank, set as a WWII monument in front of the Crimean parliament on Feb. 27, 2014 [AFP]

With Soviet-era music blaring from loudspeakers and the Russian tricolour everywhere, the overwhelming feeling in Sevastopol was that the city was finally "going home" after a 23-year stay in Ukraine.

The home of the Russian Black Sea fleet, and a bastion of pro-Russian support in Crimea, there was barely a dissenting voice in the port during Sunday's referendum, which most of the world considers illegitimate but here is seen as a just exercise in self-determination.

With half the ballots counted, Crimean officials said that 95.5% of voters had chosen union with Russia, with a turnout of over 80%. Given the absence of recognised election observers, it was impossible to verify how honestly the ballots were counted, but in Sevastopol at least, such figures did not seem implausible.

"Today is the greatest day of my life; we are returning to mother Russia," said Ludmila Balatskaya, 72, a former deputy in the city government, as she sat on a bench beneath a flag of Sevastopol in a polling station.

"I was just a little girl when they just informed us that Crimea was now Ukraine. Everything fell down around me. We are Russia, we have always been Russian people in our souls here in Crimea, but today that becomes a practical reality again" she said, tears in her eyes.

"We have been waiting for this day for 23 years," said Raisa Basova, who was born in Vladivostok but has lived for several decades in Sevastopol. "They said if we didn't take these blue [Ukrainian] passports, we wouldn't get our miserly pensions … Finally now we are going home."

Voter after voter placed into the transparent urns their ballot papers with box No 1 ticked, favouring union with Russia. Of dozens questioned, nobody said they had voted for option two: increased autonomy as part of Ukraine.

With the Crimea question seen as a foregone conclusion, attention in Sevastopol was already moving to eastern Ukraine, and locals were debating whether they would travel to the cities of Kharkov and Donetsk to offer "support" to pro-Russian dissenters in those cities.

Gennady Basov, chair of the Sevastopol division of the Russian Block party, said joining Russia would give the city and region "protection from the neo-Nazis and fascists in Kiev". His organisation has set up a number of roadblocks manned by armed irregulars on the outskirts of town. At one, on the road to Yalta, masked men with Kalashnikovs searched every car entering the city. Most of those inside the vehicles did not mind.

"This is the best thing that could happen," said one older man as his car was searched, adding that the men were protecting him and others from neo-Nazis.

Across Sevastopol, billboards warn of the "fascist" threat from Kiev and offer voters the stark choice of a bright and prosperous Crimea inside Russia or a Ukrainian Crimea filled with swastikas and barbed wire.

Everyone here speaks of the awful "provocations" that radical groups from Kiev have apparently been carrying out in the region, but when asked to name them, a group of local self-defence volunteers in Sevastopol could only recall an incident when a few people had arrived on bicycles and waved Ukrainian flags.

"We escorted them to the railway station and put them on the train back to Kiev," said one volunteer.

In contrast to Sevastopol there were no celebrations, balloons or music in Bakhchisarai, a town with a large Tatar population. Cars circled through the central streets beeping their horns and waving Russian flags. Many of the city's Tatar and Ukrainian population stayed at home watching television. Polling stations were half empty with only ethnic Russians turning out to vote.

"I did not vote because what I want is not an option on the ballot paper," said one Tatar woman speaking anonymously. "I want to be Ukrainian and have rights."

Bakhchisarai's Ukrainians are also anxious. "My parents are Ukrainian and I cannot betray them," said Ana, 53, adding in a hushed voice: "I am afraid to say to people that I am against the Russian occupation. About 80% will vote for Russia today and I hope that this will not hurt us who do not.

"We don't want corruption and bribery, Putin-style. It would be good to have European standards here. People don't understand that when they vote for Russia it is a step backwards not a step forwards."

In the village of Pionerskoe – where 98% of the 3,000 residents are Tatars –the polling station did not open after village leaders met this week and decided the vote should not go ahead.

"The referendum is illegal and that's why we don't want to take part," said Dzhalil Ibrahimov, a member of Mejlis, the Tatar council that represents Crimea's Muslim minority.

"The Crimean Tatar have no future with Russia. We want to live in a free democratic country, Ukraine. Our future is with Europe. If it will be war then we will fight; we will not go to the Russian side," said Ibrahimov. " This is a referendum under the guns of Russians, Cossacks and Chechens."

The polling station in the neighbouring Tatar village, Tekhteoljam, also did not open. The women there say they are scared about the security situation in coming days. "Now we are in isolation, we are worried that there will be violence or war," said Rimma Morozova, holding up a Ukrainian flag. "We don't see any value in this referendum, they have already decided for us. So why should we vote?"

Not all Tatars are opposed to Russia, and of those who are, many say they may leave or stay quiet rather than fight. But some are belligerent. "We will fight to the last drop of blood. We have only one motherland and nowhere to step back to. There is a cemetery and if we need to we will join our fathers there," said Emir Bakirov, 41. "Glory to Ukraine. Glory to God."

No major international bodies are monitoring the vote, but a motley selection of observers from 23 countries have arrived of their own accord. Six gave a press conference in Simferopol on Saturday – a mixture of anti-western ideologues and European far-right politicians, which is odd given the pro-Russian rhetoric in Crimea is that the referendum is necessary to avoid rule from "fascists" in Kiev.

Belá Kovács, an MEP from the far-right Hungarian party Jobbik, said everything he had seen on Saturday conformed to international standards and he expected the vote to be free and fair. Kovács said there were no British observers. The BNP's Nick Griffin "really wanted to come, but we persuaded him not to", he said.

Russia's president, Vladimir Putin, told the German chancellor, Angela Merkel, on Sunday that Moscow thought the vote was legitimate and that the hope in the peninsula was that Crimea would be part of Russia by the end of the week.

The remaining Ukrainian military installations on the peninsula, where soldiers are barricaded in by Russian troops and local defence forces, should be vacated immediately, Crimea's de facto leader Sergei Aksyonov told the Guardian on Saturday.

He also said the rouble could be introduced as soon as Tuesday, with a six-month dual-currency transition period. There have been contradictory statements about whether banks and other Ukrainian assets would be nationalised, and queues have formed at banks in recent days as withdrawals were limited. But most people here are not worried.

On Sunday evening, thousands gathered on the main square of the capital, Simferopol, to herald the victory. The crowd was split between drunken groups of men and families with children, but all joined in a rendition of the Russian anthem, and a green laser beamed "Crimea is Russia" on to the imposing Soviet-era council of ministers building.

The parliament speaker, Vladimir Konstantinov, shouted from the stage: "We have done it! You have done it! This is our victory, and nobody can take it away from us."

Whether the Kremlin is really ready to go all the way and annex part of Ukraine, and just how difficult the integration process might be, were questions for tomorrow. The crowd threw their arms in the air as one, and drowned out the crackle of fireworks overhead with their screams of approval.