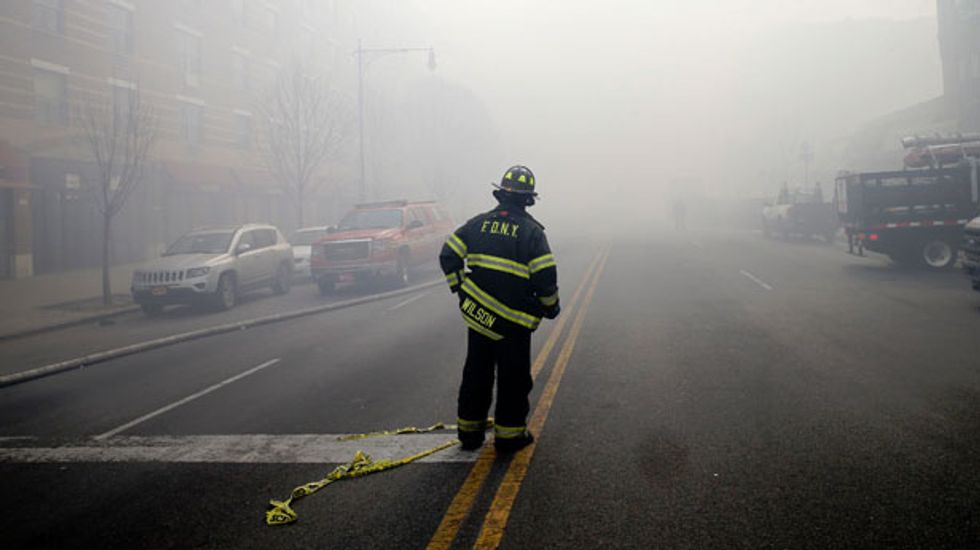 By Chris Francescani and Victoria Cavaliere

NEW YORK (Reuters) - The death toll from an explosion that collapsed two New York apartment buildings after an apparent gas leak rose to seven on Thursday, and the number of injured is close to 60, police said.

New York City Police Detective Marc Nell said a seventh victim of Wednesday's blast was pulled from the buildings' rubble, and that no one had died at a hospital.

Investigators from the National Transportation Safety Board, which investigates accidents involving natural gas, were looking into the explosion, that took place at about 9:30 a.m. ET on Wednesday, shortly after a resident nearby called Con Edison to complain about the smell of gas.

On Thursday morning, dozens of rescuers, including firefighters and police, continued a hunt for survivors or victims in the still-smoking rubble of two adjoining buildings that housed 15 apartments on a largely residential Upper Manhattan block at East 116th Street and Park Avenue.

The debris continued to flare back up at times, and passersby wore dust masks to limit inhalation of dust and smoke.

Mayor Bill de Blasio said a preliminary investigation indicated the explosion in East Harlem was caused by a gas leak.

Authorities were allowing some residents of nearby buildings to return to their homes to retrieve possessions, but many left quickly, complaining of the smoke.