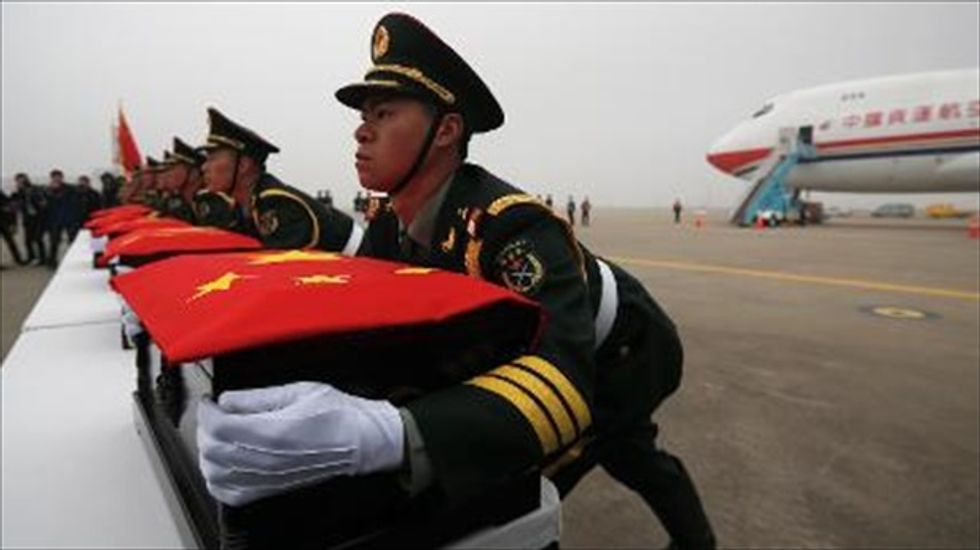 The remains of Chinese soldiers killed during the Korean war being returned to their homeland from Incheon International Airport on March 28, 2014 [AFP]

South Korea flew the remains of 437 Chinese soldiers killed during the 1950-53 Korean War back to China on Friday for final burial in their homeland.

The small coffins, draped in the Chinese flag, were carried by Chinese soldiers and loaded on a plane at Incheon airport, to be flown to the northeastern city of Shenyang where China has a state cemetery for its war dead.

"This is a new milestone in bilateral relations and is expected to serve as a good example of promoting peace in Northeast Asia," said defence ministry spokesman Kim Min-Seok.

South Korean President Park Geun-Hye had offered to return the bodies as a goodwill gesture during her visit to Beijing in June last year.

China fought alongside North Korea in the 1950-53 conflict -- its dramatic and crucial intervention coming after U.S.-led forces had pushed the North Korean army into the far north of the peninsula.

Casualty figures remain disputed but Western estimates commonly cite a figure of 400,000 Chinese deaths, while Chinese sources mention a toll of about 180,000.

The bodies were initially buried in small plots scattered around the country.

In 1996, Seoul designated a special cemetery plot in Paju, just south of the heavily-fortified border with North Korea, where all the remains of Chinese and North Korean soldiers still on South Korean soil could be buried together.

Work on exhuming the Chinese remains at Paju for repatriation began back in December.

While some graves are named, most are identified only by nationality.

More than 700 North Korean soldiers are also interred at the cemetery. But the North has ignored the South's offer to return the bodies despite sporadic talks on the issue.

The bodies of more than two dozen North Korean commandos killed in a daring but unsuccessful 1968 attack on the presidential palace in Seoul are buried there.

Also there is the body of a North Korean agent responsible for the 1987 bombing of a South Korean airliner that killed 115 people.