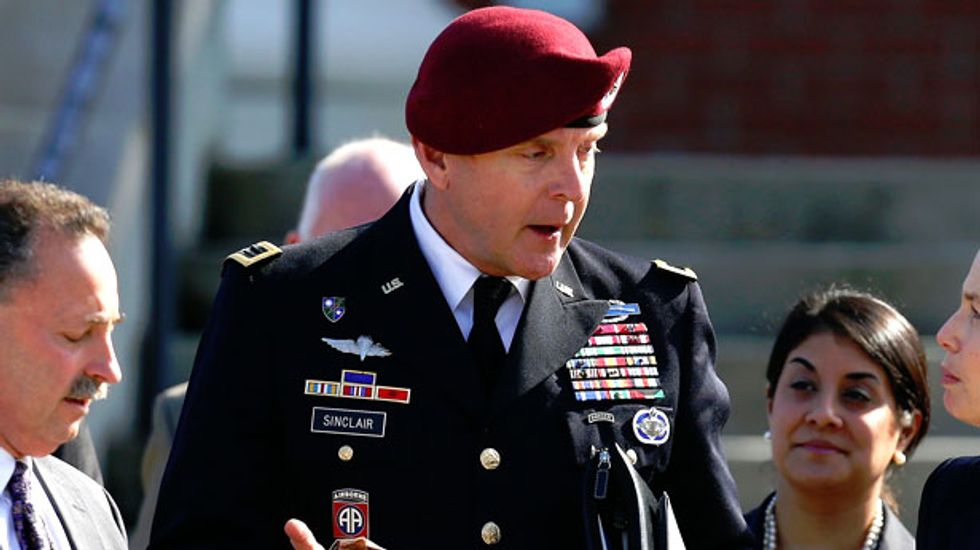 FORT BRAGG, North Carolina (Reuters) - A U.S. Army general who had faced possible life in prison on sexual assault charges was reprimanded by a judge on Thursday but avoided any jail time for mistreating a captain during one of several improper relationships with junior female officers.

Brigadier General Jeffrey Sinclair was ordered to forfeit $20,000 in pay but he also avoided dismissal from the Army for military crimes that were aired in a rare court-martial of a top officer.

The married general admitted to various offenses this week in a plea deal that dropped the sexual assault charges involving the female captain, who said Sinclair forced her to perform oral sex when she tried to break off their adulterous, three-year affair.

The one-star general and his defense team said they were grateful for the sentence, which caps a case that began two years ago and derailed the career of the former deputy commander of the 82nd Airborne Division who served five combat tours.

"The system has worked," Sinclair said after court in Fort Bragg, North Carolina. "All I want to do now is hug my kids and be with my wife."

He plans to submit his retirement paperwork and could still be demoted by the Army as part of that process, his attorneys said.

Prosecutors had no immediate comment. They had asked the trial judge, Colonel James Pohl, to dismiss Sinclair from the Army for the harm caused by his criminal acts, arguing he abused his power and used it to exploit women.

Sinclair, 51, pleaded guilty to adultery, as well as having inappropriate relationships with junior female officers, possessing pornography on his laptop while deployed in Afghanistan, misusing his government credit card to visit his mistress and using derogatory language to refer to female officers.

His case drew wide attention at a time when the U.S. military faces intense political scrutiny as it works to curb sexual misconduct in the ranks.

The defense team had said Sinclair should be allowed to retire at a reduced rank given testimony about his otherwise stellar military record and 27 years of service. The general maintained his relationship with the captain, a military intelligence officer, was consensual throughout.

The captain this week stood by her allegations of sexual assault, but the case unraveled over questions about her credibility and a finding by Pohl that politics appeared to have improperly influenced the Army's decision to reject an earlier plea offer by Sinclair.