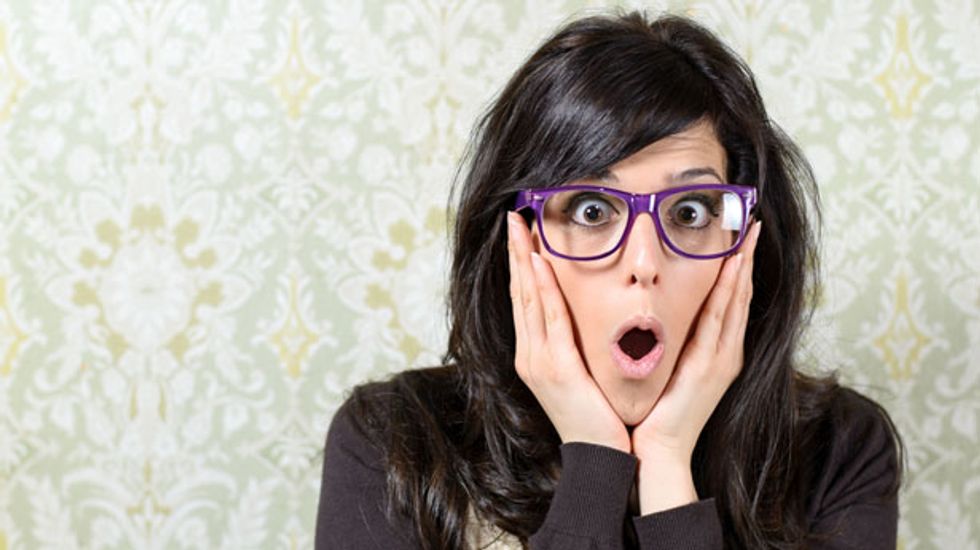 Trigger Warning: this piece discusses trigger warnings. It may also look askance at college students who are now asking that trigger warnings be applied to their course materials.

If you've spent time on feminist blogs lately or in the social-justice-oriented corner of Tumblr, you have likely come across the Trigger Warning (TW): a note to readers that the material following the warning may trigger a post-traumatic stress reaction. In the early days of feminist blogging, trigger warnings were generally about sexual assault, and posted with the understanding that lots of women are sexual assault survivors, lots of women read feminist blogs, and graphic descriptions of rape might lead to panic attacks or other reactions that will really ruin someone's day. Easy enough to give readers a little heads up – a trigger warning – so that they can decide to avoid that material if they know that discussion of rape triggers debilitating reactions.

It is true that everything on the above list might trigger a PTSD response in someone. The trouble with PTSD, though, is that its triggers are often unpredictable and individually specific – a certain smell, a particular song, being touched in that one way. It's impossible to account for all of them, because triggers are by their nature not particularly rational or universally foreseeable. Some are more common than others, though, which is why it seems reasonable enough for explicitly feminist spaces to include trigger warnings for things like assault and eating disorders.

College isn't exactly the real world either, but it's a space for kinda-sorta adults to wade neck-deep into art, literature, philosophy, and the sciences, to explore new ideas, to expand their knowledge of the cultural canon, to interrogate power and to learn how to make an argument and to read a text. It is, hopefully, a space where the student is challenged and sometimes frustrated and sometimes deeply upset, a place where the student's world expands and pushes them to reach the outer edges – not a place that contracts to meet the student exactly where they are.

Which doesn't mean that individual students should not be given mental health accommodations. It's perfectly reasonable for a survivor of violence to ask a professor for a heads up if the reading list includes a piece with graphic descriptions of rape or violence, for example. But generalized trigger warnings aren't so much about helping people with PTSD as they are about a certain kind of performative feminism: they're a low-stakes way to use the right language to identify yourself as conscious of social justice issues. Even better is demanding a trigger warning – that identifies you as even more aware, even more feminist, even more solicitous than the person who failed to adequately provide such a warning.

There is real harm in utilizing general trigger warnings in the classroom. Oberlin College recommends that its faculty "remove triggering material when it does not contribute directly to the course learning goals". When material is simply too important to take out entirely, the college recommends trigger warnings. For example, Oberlin says, Chinua Achebe's Things Fall Apart is a great and important book, but:

… it may trigger readers who have experienced racism, colonialism, religious persecution, violence, suicide, and more.

Students should be duly warned by the professor writing, for example, "Trigger warning: This book contains a scene of suicide."

On its face, that sounds fine (except for students who hate literary spoilers). But a trigger warning for what Oberlin identified as the book's common triggers – racism, colonialism, religious persecution, violence, suicide (and more!) – sets the tone for reading and understanding the book. It skews students' perceptions. It highlights particular issues as necessarily more upsetting than others, and directs students to focus on particular themes that have been singled out by the professor as traumatic.

At Rutgers, a student urged professors to use trigger warnings as a sort of Solomonic baby-splitting between two apparently equally bad choices: banning certain texts or introducing works that may cause psychological distress. Works he mentioned as particularly triggering include F Scott Fitzgerald's The Great Gatsby, Junot Diaz's This Is How You Lose Her and Virginia Woolf's Mrs. Dalloway. The warnings would be passage-by-passage, and effectively reach "a compromise between protecting students and defending their civil liberties".

But the space between comfort and freedom is not actually where universities should seek to situate college students. Students should be pushed to defend their ideas and to see the world from a variety of perspectives. Trigger warnings don't just warn students of potentially triggering material; they effectively shut down particular lines of discussion with "that's triggering". Students should – and do – have the right to walk out of any classroom. But students should also accept the challenge of exploring their own beliefs and responding to challenges. Trigger warnings of course don't always shut down that kind of interrogation, but if feminist blogs are any example, they quickly become a way to short-circuit uncomfortable, unpopular or offensive arguments.

That should concern those of us who love literature, but it should particularly trouble the feminist and anti-racist bookworms among us. Trigger warnings are largely perceived as protecting young women and, to a lesser extent, other marginalized groups – people of color, LGBT people, people with mental illnesses. That the warnings hinge on topics that are more likely to affect the lives of marginalized groups contributes to the general perception of members of those groups as weak, vulnerable and "other".

The kinds of suffering typically imaged and experienced in the white western male realm – war, intra-male violence – are standard. Traumas that impact women, people of color, LGBT people, the mentally ill and other groups whose collective lives far outnumber those most often canonized in the American or European classroom are set apart as different, as particularly traumatizing. Trigger warnings imply that our experiences are so unusual the pages detailing our lives can only be turned while wearing kid gloves.

There's a hierarchy of trauma there, as well as a dangerous assumption of inherent difference. There's a reinforcement of the toxic messages young women have gotten our entire lives: that we're inherently vulnerable.

And there's something lost when students are warned before they read Achebe or Diaz or Woolf, and when they read those writers first through the lens of trauma and fear.

Then, simply, there is the fact that the universe does not treat its members as if they come hand-delivered in a box clearly marked "fragile". The world can be a desperately ugly place, especially for women. That feminist blogs try to carve out a little section of the world that is a teeny bit safer for their readers is a credit to many of those spaces. Colleges, though, are not intellectual or emotional safe zones. Nor should they be.

Trauma survivors need tools to manage their triggers and cope with every day life. Universities absolutely should prioritize their needs – by making sure that mental health care is adequately funded, widely available and destigmatized.

But they do students no favors by pretending that every piece of potentially upsetting, triggering or even emotionally devastating content comes with a warning sign.

Two years ago, ivermectin was an obscure drug consigned only to those who had the rare displeasure of contracting parasites like scabies or river blindness. American doctors wrote a mere 150,000 prescriptions for the drug in 2019 – roughly 0.1% of the prescriptions written for Lipitor, a widely used atorvastatin designed to lower cholesterol.

Last year, however, as the pandemic raged on and conservatives stood their ground against common sense public health measures like masks and vaccines, ivermectin became a household name. Despite lacking proper consensus from the scientific community, the drug has been widely touted by right-wing pundits, politicians, and entrepreneurs as the unofficial magic bullet for COVID-19.

Richard A. Webster, WRKF and WWNO

The Jefferson Parish Sheriff's Office is investigating a deputy accused of holding a Black woman by her hair and slamming her head repeatedly into the pavement with such force that a witness to the Sept. 20 incident said it ripped several of Shantel Arnold's braids from her scalp. A 14-second video captured the incident in the New Orleans suburb where, for decades, Black residents have accused the Sheriff's Office of targeting them.

It was the second time that hour that Arnold had been assaulted. By the time the deputies arrived, she said she had already fended off an attack by some local boys.