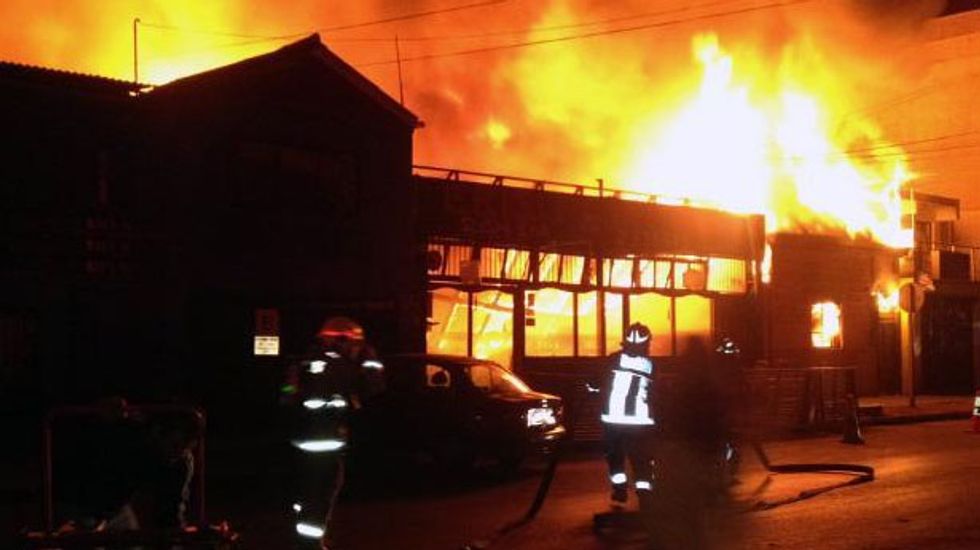 The quake sent panicked residents pouring into the streets, with more than 900,000 people along Chile's coast heeding government orders to evacuate their homes and seek higher ground.

Similar warnings were issued in a ripple effect up the Pacific coast of South America and into Central America.

But about 10 hours after the two-minute quake, the Chilean government lifted what remained of a nationwide tsunami alert.

People began trickling home after spending hours outside in the middle of the night although the Interior Ministry asked them to remain on alert, as sea levels will remain as much as a meter higher than usual.

Some fires broke out, roads were damaged and power was knocked out in the northern city of Arica, although there was no widespread destruction from the latest mighty quake in one of the world's most seismically active countries, said the disaster relief agency ONEMI.

"The street lights were busted, people ran terrified. After the earthquake there were several aftershocks," Veronica Castillo told AFP from Arica, 1,000 miles north of the capital Santiago.

The government said that so far there have been 17 aftershocks and there will be more in coming days as some energy from the quake zone has yet to be released, according to Sergio Barrientos of the seismological service at the University of Chile.

President Michelle Bachelet declared parts of northern Chile to be disaster zones and said soldiers will be dispatched to the areas to prevent looting and disorder from breaking out as they did after a deadly 8.8-magnitude quake in 2010.

More than 500 people died and $30 billion in damage was wrought in that quake.

In the city of Iquique, closest to the epicenter, some 300 prisoners escaped from a jail amid the chaos triggered by the new tremor.

A total of 39 of them have been recaptured, the Interior Ministry said.

The quake struck at 8:46 pm (2346 GMT) at a depth of 10 kilometers (six miles), 83 kilometers from Iquique on Chile's northern coast, the United States Geological Survey said.

The Hawaii-based Pacific Tsunami Warning Center issued an alert for residents living along more than 3,000 miles (4,800 kilometers) of coastline in South and Central America.

It said waves of more than six feet (two meters) had been generated.

The impact of the offshore quake went beyond Chile, with Ecuadoran and Peruvian authorities also issuing warnings.

Ecuador later reduced its alert from red to amber but maintained the higher level of vigilance on the exposed Galapagos Islands out in the Pacific.

Tremors were felt as far inland as Bolivia, while across the Pacific in Indonesia, officials said that the Asian nation could be hit by waves of up to half a meter from the Chilean quake.

"Everyone along our coast should be alert and ready," Ecuadoran President Rafael Correa said on Twitter.

In Peru, the southern coastal area was also put on alert while roads along the coast were closed, said the mayor of the capital, Susana Villaran.

"This is a warning for the population to take all precautionary measures," Peruvian naval commander Colbert Ruiz told AFP.

Honduras in Central America also declared a tsunami alert, but Nicaragua called off one it had declared earlier.

The Pacific Tsunami Warning Center also issued a warning for Colombia and Panama, and "watches" for at least six other countries.

The coastal area hit Tuesday has been the scene of numerous quakes in recent days.

On Sunday, a 6.0-magnitude earthquake struck, followed by at least two moderate aftershocks.