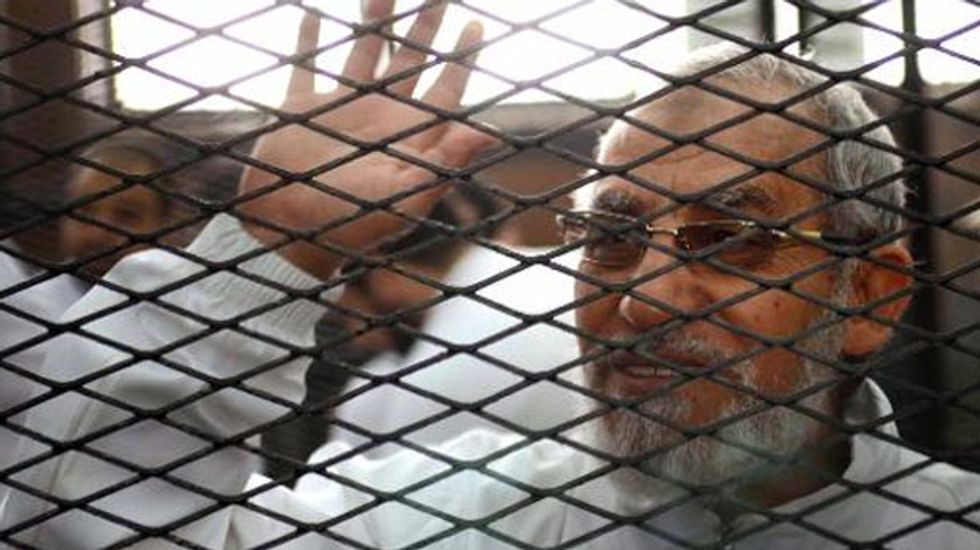 The same court in the southern province of Minya also reversed 492 of 529 death sentences it passed in March, commuting most of those to life in prison.

The court, presided over by judge Said Youssef Sabry, had sparked an international outcry with its initial sentencing last month amid an extensive crackdown on supporters of ousted Islamist president Mohamed Morsi.

The crackdown has extended to secular-leaning dissidents who supported Morsi's overthrow but have since turned on the army-installed regime.

In Cairo, a court banned the April 6 youth movement that spearheaded the 2011 revolt which toppled strongman Hosni Mubarak, following a complaint accusing it of defaming Egypt and colluding with foreign parties.

In Minya, judge Sabry is set to confirm the death sentences on June 21.

Under Egyptian law, death sentences are referred to the country's top Islamic scholar for an advisory opinion before being ratified. A court may choose to commute the sentences, which can later be challenged at an appeals court.

Of the 683 sentenced on Monday, only 73 are in custody, prosecutor Abdel Rahim Abdel Malek said. The others have a right to a retrial if they turn themselves in.

The verdict was the first against Badie, spiritual head of Morsi's Muslim Brotherhood, in the several trials he faces on various charges along with Morsi and other Brotherhood leaders.

Some female relatives waiting outside the courtroom fainted on hearing news of the verdict.

"Where is the justice?" others chanted.

A fugitive from the trial who only identified himself as Gamal and a member of the Brotherhood lashed out at the court.

"This is a political trial against those who oppose the military," said the 25-year-old who was among the 683 sentenced Monday but who is in hiding.

"My cousin has also been condemned, but we will continue our lives and this process will not stop the youths" from demonstrating, he said.

The Brotherhood urged the world to act against "gross human rights violations and injustice committed by the military junta in Egypt against its own people".

It said in a statement it would "continue to use all peaceful means to end military rule and achieve justice".

Those sentenced on Monday were accused of involvement in the murder and attempted murder of policemen in Minya province on August 14, the day police killed hundreds of Morsi supporters during clashes in Cairo.

Defence lawyers boycotted the last session, branding it "farcical" after the mass death sentencing, which the United Nations denounced as a breach of international human rights law.

Lawyer Elkomy claims 60 percent of the 529 defendants sentenced in March, including teachers and some doctors, have evidence that "proves they were not present the day they were accused of attacking the Matay police station" in Minya, said the Avaaz rights group.

Defence lawyers and relatives of defendants said those sentenced to death in March also included a man who was killed on August 14.

The government has defended the court's handling of the first mass death sentences, insisting they were issued only "after careful study" and were subject to appeal.

Prosecutor Abdel Malek defended the charges against the 529, saying the prosecution compiled videos and witness testimony.

"We have strong evidence that incriminates all those sentenced to death," he told AFP.

Last month's death sentences sent a chill through opponents of the military-installed regime, which has held mass trials of thousands of alleged Islamists since Morsi's ouster.

Amnesty says more than 1,400 people have been killed in the police crackdown since the army overthrew Morsi, Egypt's first elected and civilian leader.