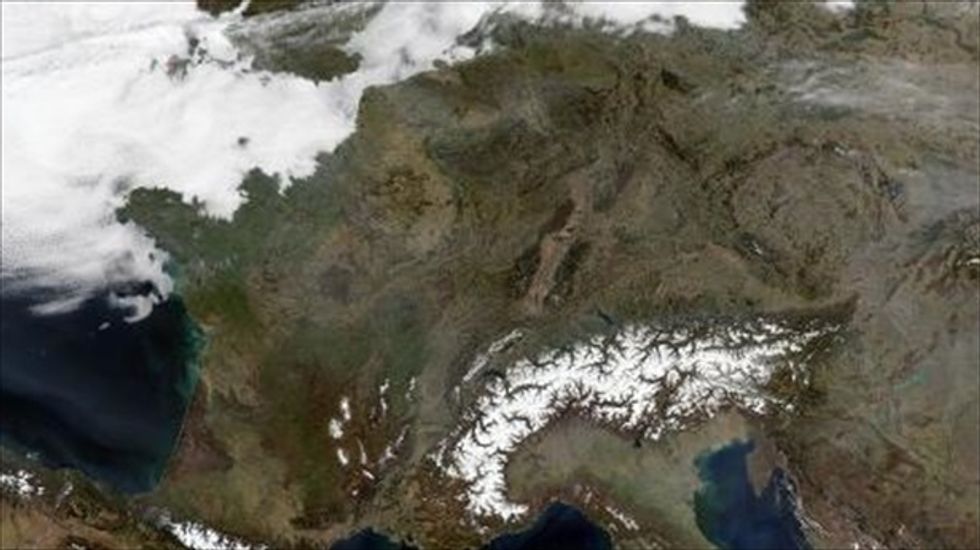 Europe on Thursday launched the first in a constellation of hi-tech satellites designed to monitor Earth for climate change and environmental damage and help disaster relief operations.

Sentinel-1A, a satellite designed to scan the Earth with cloud-penetrating radar, lifted off at 2102 GMT aboard a Soyuz rocket from Kourou, French Guiana, the European Space Agency (ESA) said.

The 2.2-tonne satellite is the first of half a dozen orbital monitors that will be built and launched under the 3.786-billion-euro ($5.19-billion) Copernicus project, a joint undertaking of ESA and the European Union (EU).

Sentinel-1A separated from the rocket's upper stage 23 minutes and 24 seconds after launch.

It will be followed by a partner, Sentinel-1B, due to be launched towards the end of next year.

Operating 180 degrees apart, at an altitude of about 700 kilometres (435 miles), between them the pair will be able to take a radar picture of anywhere on Earth within six days.

Radar scanning has a range of uses, from spotting icebergs and oil slicks to detecting rogue logging and ground subsidence.

The data will be widely accessible to the public, and is likely to have uses that go beyond the environment, such as in construction and transport.

By mapping areas stricken by flood or earthquake, the monitors will also be able to help emergency teams identify the worst-hit areas and locate roads, railway lines and bridges that are still passable, ESA says.

The others in the series are Sentinel-2, which will deliver high-resolution optical images of forests and land use; Sentinel-3, providing ocean and land data; and Sentinels 4 and 5, which will monitor Earth's atmospheric composition -- the basic component in fine-tuning understanding about greenhouse gases.

The goldmine of data expected to be thrown up by the satellite constellation will be more accessible to the public than any previous Earth-monitoring programme.

The potential applications go beyond stewardship of the environment. They could help shipping firms, farmers and construction companies, too.

"Copernicus is the most ambitious Earth observation programme to date," ESA said.

"It will provide accurate, timely and easily accessible information to improve the management of the environment, understand and mitigate the effects of climate change and ensure civil security."

Copernicus replaces Envisat, one of the most successful environmental satellites in space history, whose mission ended in 2012.

It was named last year in honour of the 16th-century Polish astronomer who determined that the Earth orbited the Sun, and not the other way round, as convention had it at the time.