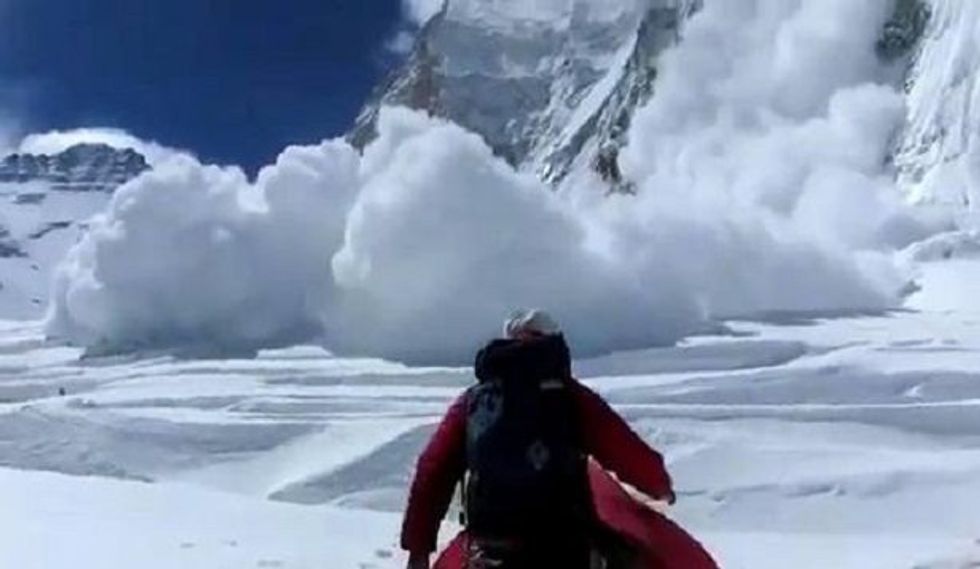 Rescuers on Mount Everest found the body of a 13th Nepalese guide on Saturday as authorities ruled out hope of finding any more survivors from the deadliest accident ever on the world's highest peak.

Three sherpas remained missing from Friday's avalanche which struck after a large party of guides left Everest base camp carrying tents, food and ropes to prepare for international clients ahead of the main climbing season, which starts later this month.

Towards the evening, rescuers suspended the search until Sunday.

"We have suspended the rescue operation for today. It is risky to continue searching the mountain as evening sets in," tourism ministry official Madhusudan Burlakoti told AFP.

The avalanche smashed into the sherpas early Friday at an altitude of about 5,800 metres (19,000 feet) in an area nicknamed the "popcorn field" due to ice boulders on the route leading into the treacherous Khumbu icefall.

Dozens of guides were on the move when a huge block of ice broke off from a hanging glacier, before splitting into smaller chunks and barrelling down into the icefall, one of the most dangerous areas on the route to ascend Everest.

The ice "tumbled for several thousand feet, resulting in debris that came further out into the icefall", according to an account by the International Mountain Guides climbing company, which has a team stationed on the peak.

Veteran climber Alan Arnette, who reached the summit of Everest in 2011, said mountaineers usually tried to go through the icefall "as quickly as possible".

The hanging glaciers "are by definition unstable, sooner or later they are going to break and fall, making the icefall very dangerous", Arnette told AFP from his home in Colorado.

"You first hear the sharp crack of ice and then you can try to shield behind another block of ice, but in this case, they really had nowhere to hide."

More than 300 people, most of them local guides, have died on Everest since the first summit by Sir Edmund Hillary and Tenzing Norgay in 1953.

The death toll underscores the huge risks borne by local guides, who ascend the icy slopes, often in pitch-dark, usually weighed down by tenting equipment, ropes and food supplies for their clients.

The nature of their work means that sherpas will usually make many more trips up the mountain and expose themselves to far greater risk than foreign climbers who pay tens of thousands of dollars to summit the peak.

Climbers have suspended all expeditions until rescue operations conclude, police official Kumar Timilsina told AFP from the base camp of the 8,848-metre peak.

"People have lost friends they've worked hand in hand with. Everyone is heartbroken," Timilsina said.

In Kathmandu, anxious families waited for the bodies of their loved ones to arrive ahead of funeral rites at the city's Buddhist monasteries.

"He used to say that... after the 10th expedition, he will stop," she told AFP, while waiting for his body to arrive at a monastery in the capital.

"I spoke to him on Thursday evening. He said he was going up the next morning, but the weather was not very good... He said, 'pray for me'."

"We are six siblings and our grandparents are old. I am worried about how we will take care of each other," said the teenager.

"It's very difficult for families when the main breadwinner dies, but the association will look after their children's education," he said.

The previous worst accident on Everest occurred in 1996 when eight people were killed during a storm while attempting to summit the mountain.

In the past, some accidents have been blamed on overcrowding or on ill-prepared foreign climbers taking unnecessary risks to reach the summit before returning home.

Every summer, hundreds of climbers from around the world attempt to scale peaks in the Himalayas when weather conditions are ideal.

Nepal's government has issued permits to 734 people, including 400 guides, to climb Everest this summer.

The impoverished Himalayan country is home to eight of the world's 14 peaks over 8,000 metres.

[IMAGE: Buddhabir Rai/AFP -- The avalanche that killed at least thirteen sherpas is pictured as it barrels down a mountain near Mount Everest, on April 18, 2014]