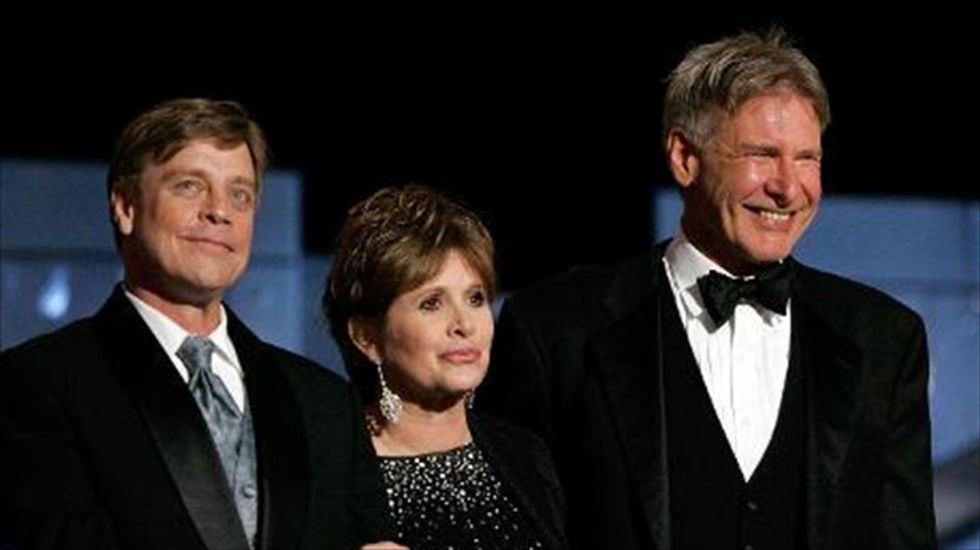 (L-R) Actors Mark Hamill, Carrie Fisher and Harrison Ford speak during an tribute to George Lucas at the Kodak Theatre on June 9, 2005 in Hollywood, California [AFP]

The original Star Wars movie blasted its way onto screens a long time ago, in a cinema galaxy seemingly far, far away -- but Han, Luke and Leia will be back soon.

On Tuesday, Disney announced the cast of the film just now entering production under the name Star Wars: Episode VII, after months of frenzied speculation among the sci-fi saga's passionate fans.

At 71, Harrison Ford may no longer have space smuggler Han Solo's roguish good looks and thick head of hair.

And 62-year-old co-star Mark Hamill will fill out Luke Skywalker's flowing Jedi robes a little more thoroughly than he once did.

But fans of the saga -- many of them disappointed by a series of prequels to the three-decade-old original trilogy -- will welcome their return and that of 57-year-old Carrie Fisher's feisty Princess Leia.

Disney, the new owner of pioneering director George Lucas' record-breaking franchise, has recruited blockbuster director J.J. Abrams to bring these fan favorites back to the screen.

His trio of stars may have aged, but he will have access to a much more powerful array of computerized special effects than Lucas had when he launched the series in 1977.

And the original cast, including Anthony Daniels and Kenny Baker as androids C3PO and R2-D2 and Peter Mayhew as the hairy "Wookie" warrior Chewbacca, will be joined by new, mainly younger talent.

Serkis is well known but not the most recognizable, as his biggest roles have been as the voice and movements behind motion-capture animated characters like the villainous Gollum in The Lord of the Rings.

Cast members appeared in a photo of a script reading, alongside Abrams and R2-D2, the loyal robot mechanic that has accompanied the heroes through all six movies to date.

"It is both thrilling and surreal to watch the beloved original cast and these brilliant new performers come together to bring this world to life, once again," Abrams said.

"We start shooting in a couple of weeks, and everyone is doing their best to make the fans proud," he promised.

Abrams is a respected mainstream director who has already won plaudits for reviving a beloved space opera franchise, taking the captain's chair on the successful 2009 "Star Trek" re-boot.

But "Star Wars" is, if anything, an even bigger challenge.

But, while the stories still have a massive popular audience, many purists were disappointed by the prequel trilogy, which they felt failed to capture the mythic feel of the originals.

Filming on Episode VII will begin next month at London's Pinewood Studios. Reports in local media in Abu Dhabi have suggested that some sets have also been constructed in the Arabian desert.

Scriptwriter Lawrence Kasdan returns to the sage, having previously written the second and third films The Empire Strikes Back and Return of the Jedi.

Music will once again come from Oscar-winning composer John Williams, whose epic score -- one of the most recognizable in cinema history -- soars over the iconic opening narrative crawl of each film.