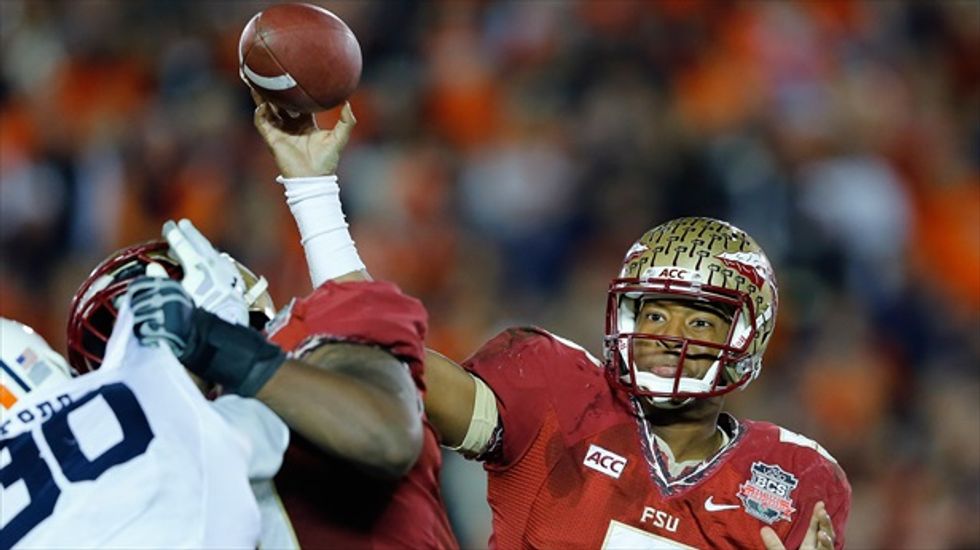 Winston, who also is pitcher, was suspended indefinitely from the university's baseball team after the incident, team officials said.

He walked into a Publix supermarket near the university campus in Tallahassee on Tuesday night, ordered the food and left the store without paying, said Mike Wood of the Leon County Sheriff's Office.

Store employees identified Winston and deputies went to his apartment, Wood said. He said Winston told authorities he forgot to pay and realized it when he got home but made no attempt to return to the store or contact Publix.

"Jameis was very cooperative," Wood told reporters. "He said he left without paying for the items."

Police issued Winston a civil citation, which Wood said is often used for non-violent minor crimes for people with no previous criminal history. Winston will be required to serve at least 20 hours of community service.

"This is not a criminal arrest," Wood said.

Wood said there is a store security video of the incident but it is not being publicly released.

Winston, one of only two freshman to win a Heisman, led Florida State to the national championship in January. He passed for more than 4,000 yards and the team finished the season undefeated with a 14-0 record.

Florida State baseball coach Mike Martin said in a statement that he decided to suspend Winston, who is an outfielder and a relief pitcher on the team.

"I am confident he will complete his community service obligation and the situation will be resolved soon," Martin said.

In December, Winston was cleared by a Florida state attorney of possible sexual assault charges after authorities determined there was insufficient evidence to charge him.

[Image: Florida State Seminoles quarterback Jameis Winston throws a pass against the Auburn Tigers in the fourth quarter during the NCAA BCS Championship football game in Pasadena, California on Jan. 6, 2014. By Mike Blake for Reuters.]