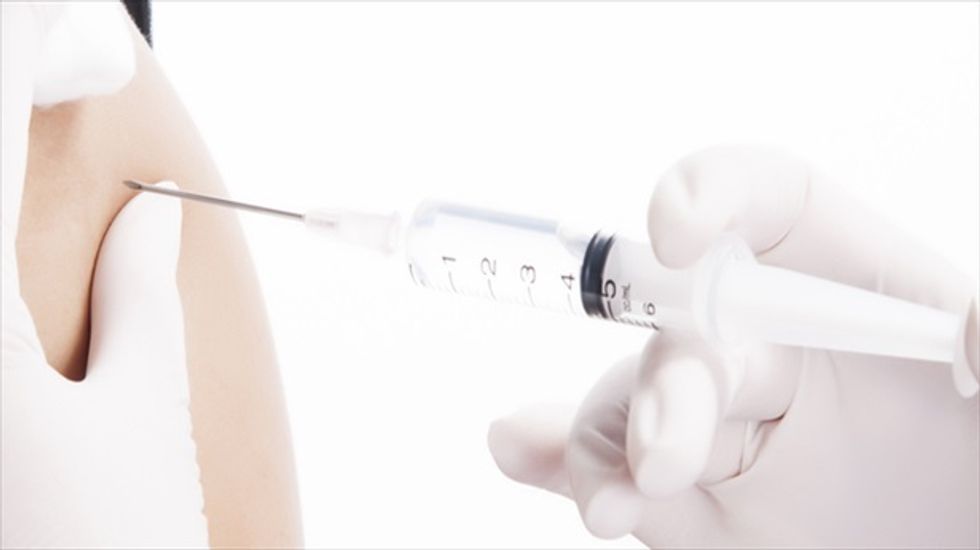 'Nurse Holding A Syringe Give An Injection' [Shutterstock]

(Reuters) - The number of mumps cases from an outbreak in central Ohio has more than quadrupled over the last two weeks, to 116, mostly students at Ohio State University or people connected to the school, authorities said Tuesday.

The outbreak had been limited to the university and those connected to it initially, but health officials said in late March it had spread to other parts of the Columbus, Ohio, area. The reported cases stood at 28 two weeks ago.

Four people have been hospitalized in the outbreak, which includes 93 students, staff members or relatives of students at the school, the Columbus Health Department said.

At least three of the infected people are confirmed as not having received vaccinations for the mumps, said Jose Rodriguez, a Columbus health department spokesman.

"If even one person is unvaccinated we are all at risk," he said.

Rodriguez said 10 to 20 percent of the population is vulnerable even if they have been fully vaccinated for measles, mumps and rubella. Potential complications from the mumps can be permanent, he added.

There have been four reported cases of orchitis, a swelling of the testicles that can lead to infertility, and one of potential deafness among the infected, he said.

Mumps is a contagious disease that causes painful swelling of the salivary glands. It is considered rare in the United States. Franklin County, which includes Columbus, typically sees one reported mumps case per year.

The number of mumps cases reported annually in the United States has dropped 98 percent since a vaccine was introduced in the 1960s, according to the U.S. Centers for Disease Control and Prevention.

A multi-state outbreak in 2006 led to nearly 6,600 reported cases with more than 80 percent of the people saying they were attending college.

[Image: "Nurse Holding A Syringe Give An Injection," via Shutterstock]