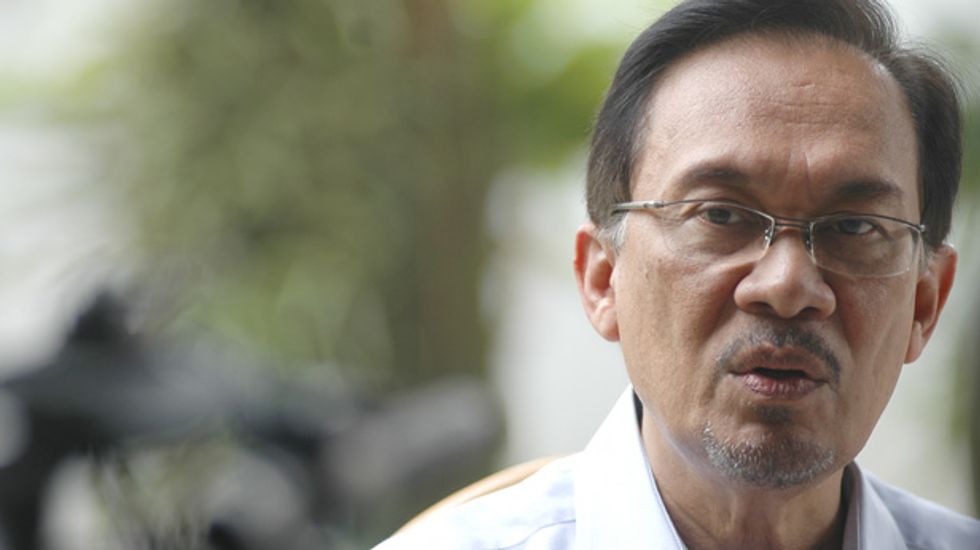 The last time Anwar Ibrahim, Malaysia's opposition leader, was sent to prison, he read the complete works of Shakespeare, (five times), wrote essays and treatises, gave interviews and strategised about how best to lead the opposition party to victory against the ruling party, which has governed this south-east Asian nation for nearly 60 years.

Ten years later, he once again faces imprisonment on sodomy charges, which he claims are politically motivated.

His case has gripped Malaysia in its range from the absurd to the bizarre. Charged in 2008 with sodomising a former male aide, Anwar was cleared in 2012 on lack of evidence. But an appeals court overturned the acquittal last month on the eve of a byelection in Malaysia's richest state, Selangor, where he was tipped to become chief minister.

Not only did the conviction rely on a witness of doubtful testimony, the appeal was led by the government and the lead prosecutor suddenly did an about-face and switched to Anwar's defence team.

"It's a sign of desperation on the part of the government," said Anwar of his conviction, in an interview in London, where he is visiting his friend and former American vice-president Al Gore, after being granted a stay of sentence. "They think because the [next general] elections are four years away they can literally get away with murder."

Anwar, 66, is Malaysia's longest-suffering political opponent and greatest threat to the incumbent Umno government, led by the prime minister Najib Razak, whose Barisan Nasional (National Front) alliance has ruled the country since independence.

Anwar is a polarising figure in a conservative nation of 30 million, where his political career has spanned formidable highs and lows: once serving as the deputy prime minister and finance minister, he was courted by international media and graced the cover of Newsweek, then fell out spectacularly with the premier Mahathir Mohamad.

Anwar has long contended that all the charges against him were politically motivated, with the sodomy convictions based on an archaic colonial law rendering sex between men a punishable offence, even if consensual. Very few sodomy cases ever make it to court and Anwar and his supporters believe his charges to be a political ploy to keep him out of politics in a conservative nation built on family values. He first spent six years in prison, mostly in solitary confinement, until his release in 2004.

This second sodomy charge followed a stellar performance by Anwar's three-party opposition coalition in the 2008 general elections, at which the opposition made huge gains against the Barisan Nasional – and was overturned in 2012 by Malaysia's high court.

Analysts believe there was "no coincidence" regarding the overturning of that acquittal last month, with human rights groups, the US state department and UN all questioning the legality of the court decision.

"This trial was all about knocking Anwar Ibrahim out of politics, pure and simple," said Phil Robertson, of Human Rights Watch. "The Malaysia judiciary … has shown how hard it is to get a free and fair trial when political issues are at play."

Yet it is not just Anwar the government seems to be targeting, say civil rights groups, who point to the arrest and conviction of other prominent opposition MPs, such as Karpal Singh, who was convicted of sedition, under another ill-used colonial-era law, as a means to thwart an opposition that has had big gains in the last two general elections, as well as in the byelections last month.

"What's alarming is the extent to which this government, which is supposed to have won the election, is going to undermine the opposition," said Ambiga Sreenevasan, a lawyer and former chair of Bersih, the Coalition for Free and Fair Elections. "This is really without a doubt a clear-cut case of selective – I'm going to call it persecution – not prosecution."

Anwar's conviction could once again be overturned, pending a federal court hearing expected within the next month. But in a nation where the definition of justice depends on "what the government of the day feels like doing", said Ambiga, it was unclear just how far Malaysia would go to silence its opposition.

As for Anwar, who could well choose to never return to Malaysia, life in his home country, whether behind bars or atop rally stages, seems the only option for fighting for a democracy that he says will one day prevail.

"There is no benefit to going back to Malaysia," he said. "[But] I decided a long time ago that I wanted to go back because it is my conviction, it is my firm belief, that Malaysia has to mature as a vibrant democracy that has no corruption, abuse of power or leadership that has been squandering billions of dollars.

"It's tough when you consider my wife and children suffer, but they know, and I discussed it with them, they support me even though they are not happy for me to endure this again. But we have to weather the storm. I am always optimistic."

A mass rally backing Anwar is planned for 1 May in Kuala Lumpur, where other rallies in support of Bersih, calling for clean and fair elections, have attracted hundreds of thousands of Malaysians to take to the streets in recent years.

"Tyrants, authoritarian leaders, are not permanent features. They are racing against time. Over the temporary setbacks, the clamour for reform or democracy is irreversible," Anwar said.