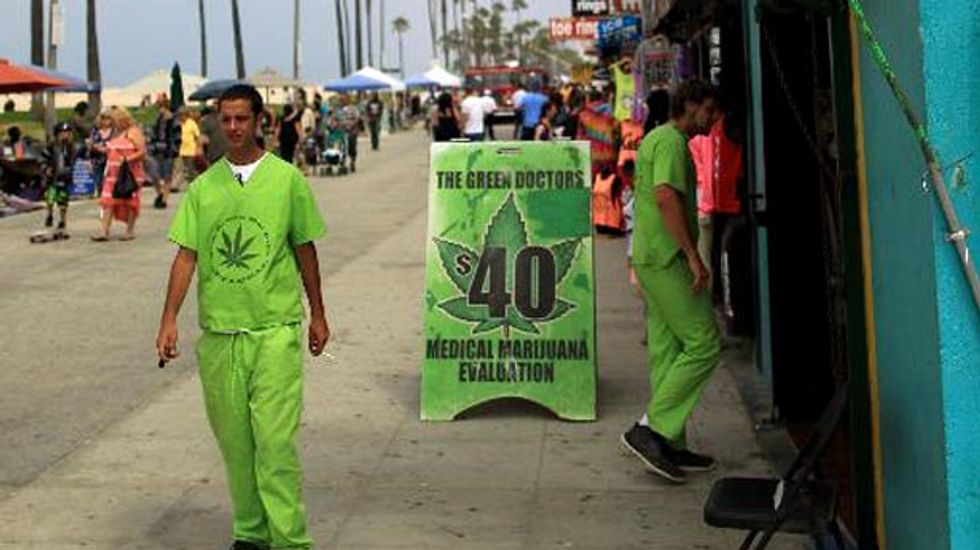 Three out of four Americans believe marijuana will one day be legal to buy and use anywhere in the United States, according to a public opinion poll released Wednesday.

Fifty-four percent of respondents to the Pew Research Center survey said marijuana should be legalized, compared to 42 percent who were opposed, the Washington-based pollsters reported.

When asked if they thought the sale and use of marijuana would eventually be legal nationwide, 75 percent responded yes -- including those who oppose legalization.

"The public appears ready for a truce in the long-running war on drugs," said Pew in a summary of its findings, which appear on its website.

Colorado and Washington state have legalized pot for recreational use, while 21 states plus the District of Columbia allow marijuana to be prescribed for medical use.

But under federal law, marijuana is an illegal drug on a par with heroin and LSD -- and in testimony Wednesday before Congress, the head of the Drug Enforcement Administration (DEA) favored sticking to that hardline stance.

"The fight against drug abuse is a generations-long struggle; it will not be won overnight," said Michele Leonhart as she appealed to the House of Representatives appropriations committee for a bigger DEA budget.

She said marijuana-related emergency department visits had jumped by 48 percent between 2007 and 2011 -- with marijuana only slightly trailing cocaine as the most-cited reason for emergency room visits.

Pew said it questioned 1,821 adults across the United States by telephone from February 14 to 23 for its survey, with a margin of error of plus or minus 2.6 percentage points.

Two out of three respondents thought the government should focus more on providing treatment for those who use hard drugs such as heroin and cocaine -- and 63 percent welcomed the fact that some states have moved away from mandatory penalties for non-violent drug users.

On the other hand, 63 percent said they'd be bothered by people consuming marijuana in public, while four in ten said they would mind a marijuana retailer opening up shop in their neighborhood.

In another survey Wednesday, this time by websites WebMD and Medscape, 67 percent of doctors in the United States thought marijuana should be a medical option for patients.

Sixty-nine percent said it could help with certain treatments and conditions, such as seizure disorders, chronic pain resulting from cancer or physical injury, and nausea brought on by medication.

Support was strongest among oncologists and hematologists, with 82 percent in favor, while neurologists reported the highest number of patients who ask whether marijuana could help them.

WebMD and Medscape said they contacted 1,544 doctors for their joint survey, with a margin of error of plus or minus 1.8 percentage points.