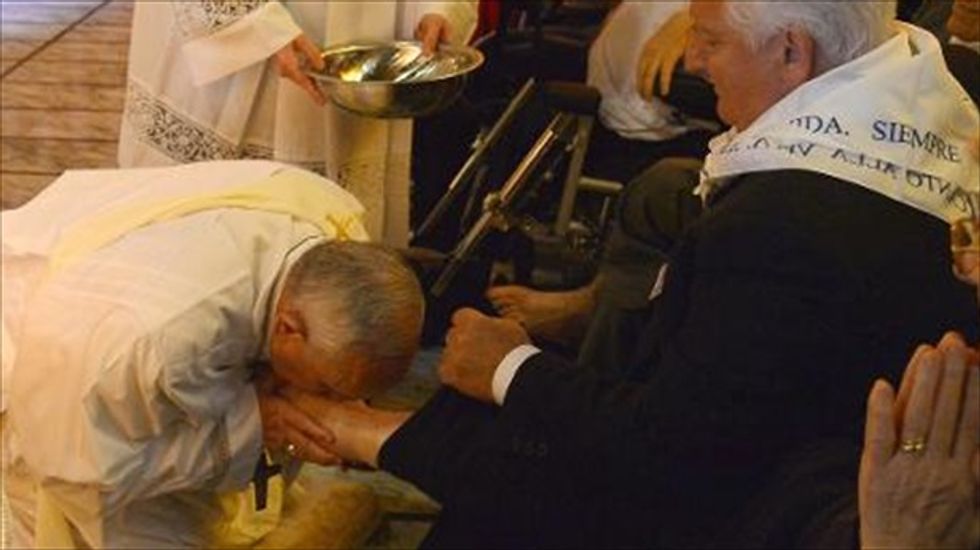 Pope Francis (L) kisses the foot of a man as he performs the traditional 'Washing of the feet' during a visit at a center for disabled people in Rome during Holy Week on April 17, 2014 [AFP]

Pope Francis washed the feet of a dozen elderly and disabled people including a Libyan Muslim during an Easter ritual in Rome on Thursday imitating Jesus Christ's humility.

The 77-year-old bent down with difficulty to wash and kiss the feet of the nine Italians and three foreigners aged between 16 and 86 years old at the Don Carlo Gnocchi foundation's Santa Maria della Provvidenza centre.

Francis arrived in a Ford Focus to cheers from crowds and stopped to speak with elderly and disabled people gathered at the centre's modern Church in Rome's suburbs, before picking up a silver urn of water and a white towel, and kneeling in front of the chosen 12.

"It was the slaves, the servants who washed the dirt from the street off the feet of arriving guests. Jesus did a slave's job. He is God and became our servant," the pope said.

The youngest to have his feet washed at the ceremony, which is part of the run-up to Easter Sunday, was 16-year-old Osvaldinho from Cape Verde, who is wheelchair bound after damaging his spine diving into the sea last summer.

Angelica, 86, who fell and broke her hip last year, was the oldest -- along with artisan Pietro, who suffers from muscular problems and poor balance.

Among the others was 75-year-old Hamed, a Libyan Muslim who worked for years for the Italian-Arab chamber of commerce, before a road accident left him with serious neurological damage.

Francis has often shown particular attention to disabled people and the elderly, condemning a "hidden euthanasia" in modern societies against the old.

Shortly after his election last year, Francis visited a youth detention centre where he performed the washing of feet ritual on a group of young inmates -- including two Muslims, the first Catholic leader ever to do so.