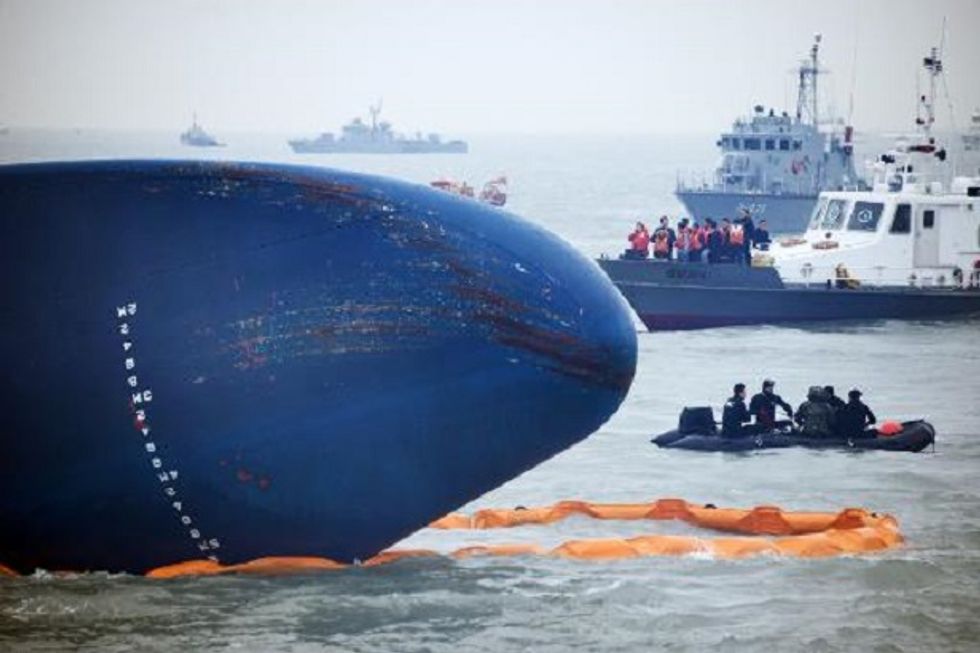 Divers began to locate bodies Saturday inside a submerged South Korean ferry as the detained captain defended his decision to delay evacuation of the ship when it capsized nearly four days ago with 476 people on board.

Investigators arrested captain Lee Joon-Seok and two of his crew early in the morning. All three have been criticised for abandoning hundreds of passengers trapped in the ferry, as they made their own escape.

Lee was charged with negligence and failing to secure the safety of passengers in violation of maritime law.

Thirty-three people have been confirmed dead in the disaster, but 269 are still missing -- most of them children on a high school holiday trip.

As the arrests were being made, dive teams who had spent two days vainly battling powerful currents and near zero visibility, finally penetrated the passenger decks of the 6,825-tonne Sewol.

They attempted to break through the window but failed and had to surface without retrieving the bodies, he explained in a briefing to relatives of the missing.

The relatives, who have been sleeping in a gymnasium on Jindo island near the scene of the disaster, were shown video footage from one dive.

Even with a powerful underwater flashlight, visibility was measured in inches as the diver was seen groping his way blindly along the side of the ship with the help of a pre-attached rope.

Additional ropes were being attached ahead of a major push to get more rescuers inside.

"Instead of dispatching two divers at a time, we're going to send up to 10," said senior coastguard officer Choi Sang-Hwan.

Earlier Saturday captain Lee and the two crew members were paraded before TV cameras at their arraignment, dressed in dark raincoats with their hoods pulled up and their heads bowed.

Questioned as to why passengers had been ordered not to move for more than 40 minutes after the ship first foundered, Lee insisted it was a safety measure.

"At the time a rescue ship had not arrived. There were also no fishing boats or other ships around to help," Lee said.

"The currents were very strong and the water was cold at that time in the area.

"I thought that passengers would be swept far away and fall into trouble if they evacuated thoughtlessly," he added.

Experts have suggested many more people might have escaped if they had moved to reach evacuation points before the ship listed sharply and water started flooding in.

The relatives camped out in the Jindo gym -- most of them parents of high school students -- have sharply criticised the pace of the rescue operation, accusing officials of incompetence and indifference.

Only 174 were rescued when the ferry sank and no new survivors have been found since Wednesday.

Nam Sung-Won, whose 17-year-old nephew was among the missing, said the clock was fast running down on the hope that some may have survived.

- Bracing for the worst -

"We don't have much time. Many people here believe this is the last possible day for finding trapped passengers alive.

"After today, hope will be gone," Nam said.

For those relatives ready to accept the worst outcome, the coastguard had set up a tent near the gym to take DNA tests to facilitate eventual identification of recovered bodies.

"Up until yesterday, I was still hanging on to some hope," said Han Mi-Ok, whose teenage son was listed as missing.

"But today I'm bracing myself for the worst," she told AFP Saturday before entering the tent to provide a sample.

More than 350 of those on board were students from Danwon High School in Ansan city just south of Seoul.

The unfolding tragedy was compounded by the apparent suicide Friday of the school's vice principal, Kang Min-Kyu, who was seemingly overcome by guilt at having survived the sinking.

Initial questioning of the captain has focused on what actually caused the ferry to sink.

Tracking data from the Maritime Ministry showed the vessel made a sharp turn just before sending its first distress signal.

Some experts believe a tight turn could have dislodged the heavy cargo manifest -- including more than 150 vehicles -- and destabilised the vessel, causing it to list heavily and then capsize.

Captain Lee confirmed he was not at the helm when the ship ran into trouble.

The ship was being steered by a 55-year-old helmsman identified by his surname Jo, under the supervision of the female third officer.

"It may have partly been my fault," Jo said at the arraignment. "But the steering gear rotated unusually fast."

[IMAGE: Ed Jones/AFP/File -- South Korean coastguards and divers search for missing passengers from a capsized ferry at sea some 20 kilometres off the island of Byungpoong in Jindo, on April 17, 2014]