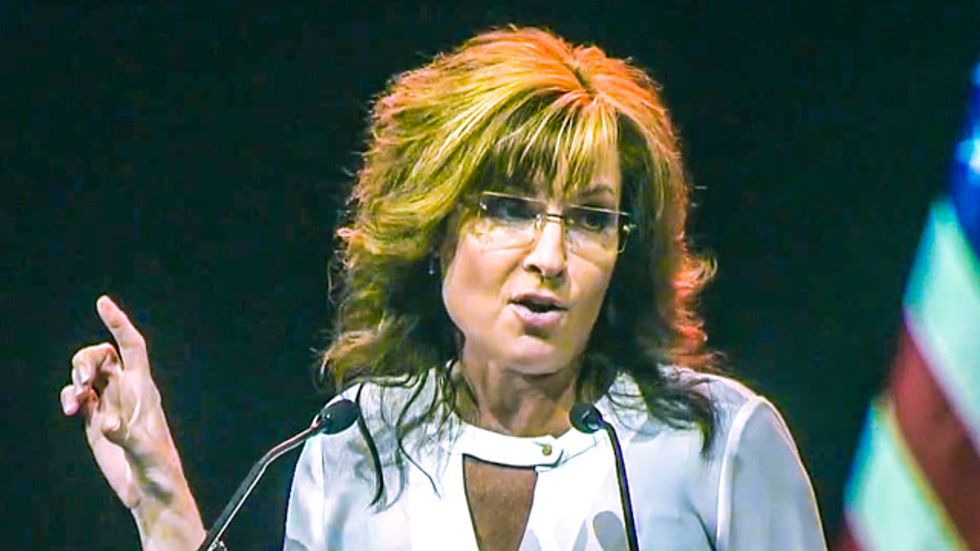 Faithful America, a large online community of Christians, has launched an effort to publicly denounce former Republican vice presidential nominee Sarah Palin after she mocked one of the religion's most important rituals by comparing it to waterboarding.

Speaking at the National Rifle Association (NRA) convention last week, Palin had explained how things would be different if she were president.

“They obviously have information on plots to carry out jihad,” Palin said of terrorists. “Oh, but you can’t offend them, can’t make them feel uncomfortable, not even a smidgen. Well, if I were in charge, they would know that waterboarding is how we baptize terrorists.”

By Tuesday, Faithful America had already reached its goal of 15,000 signatures on a petition condemning Palin for the remarks.

"This is what we've come to in America: A former candidate for vice-president can equate torture and Holy Baptism, and one of the nation's most powerful political lobbies erupts into cheers and applause," Faithful America noted. "As usual, Palin's remarks are already making international headlines, once again portraying Christianity as a religion of hatred and violence."

The petition states: "For Christians, torture is not a joke or a political punchline, but a ghastly reminder of the suffering of Jesus upon the cross. By equating it with Holy Baptism -- the act by which we are united with Christ in his death and resurrection -- Sarah Palin is blasphemously twisting our faith into a weapon of hatred and violence. No media outlet should cover her remarks without reporting on how sincere Christians of all theological and political persuasions are appalled."

The Washington Post reported on Monday that other Christian leaders had also spoken out against the former Alaska governor.

"Gov. Palin was attempting to appeal to the basest political populism (nothing in her remarks could be construed as genuinely conservative) by claiming that current U.S. counterterrorism policy is overly-tolerant and empathetic toward our enemies," Joe Carter of The Gospel Coalition wrote. "Unfortunately, what Palin is proposing is a mixture of pagan ethics and civil deistic religion."

Watch video of Palin speaking to the NRA below.