Venezuela in crisis as Maduro limps to a year in power 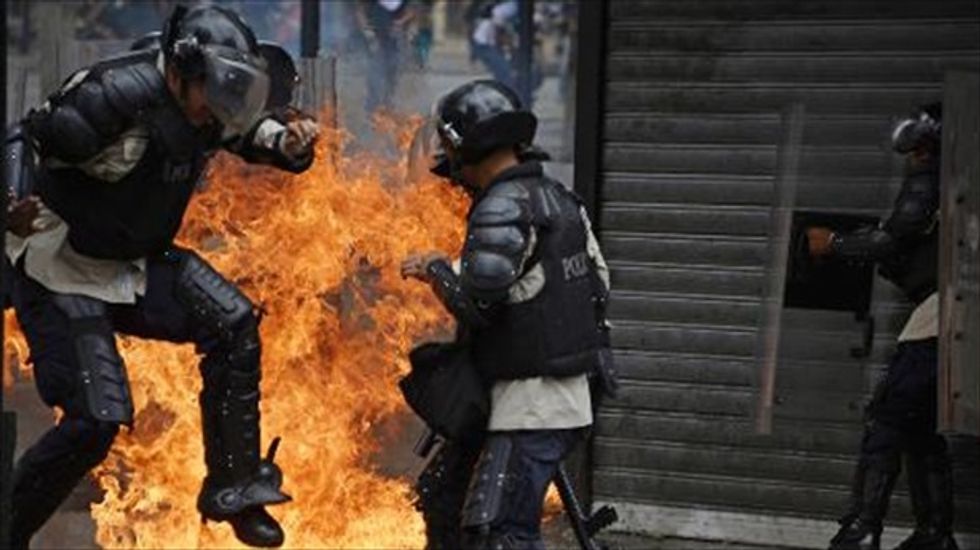 A member of the National Police runs away from a fire after anti-government protesters threw a Molotov cocktail at them during clashes in Caracas, Venezuela, on April 17, 2014 [AFP]

Maduro, the self-proclaimed "son" of iconic leader Chavez, was narrowly elected after Chavez died from cancer and was sworn in April 19, 2013, pledging to carry on his mentor's socialist legacy.

The former bus driver and union leader immediately pledged to tackle the most glaring problems: inflation nearing 30 percent and rising crime that saw an estimated 17,000 murders a year, or nearly 50 a day.

But despite many grand pronouncements of "offensives," the situation has only got worse in a number of areas.

Inflation now flirts with 60 percent, there is an acute shortage of foreign currency reserves, and basic goods ranging from meat to toilet paper are seeing recurrent shortages.

Most economic analysts blame the problems on a decade of rigid currency and price controls, as well as a drop in production, rising dependence on imports and debt costs -- a lackluster record for a country that hosts the world's largest oil reserves.

But facing harsh criticism of his leadership, Maduro blames an "economic war" waged by the right-wing "bourgeoisie" and the private sector, supported by US-based interest groups.

In October, as the economic crisis worsened, the national assembly granted him special powers for a year, permitting him to rule by decree -- but with no tangible results yet.

Maduro is determinedly trying to fill Chavez's shoes -- going as far as copying exact phrases and expressions -- but he lacks the charisma and pragmatism that permitted the longtime leader to gather supporters beyond his own socialist party.

Considered a moderate when he came to power, Maduro has governed "by extremism, for extremism," said Carmen Beatriz Fernandez, of the Datanalisis Institute, who lamented the president has not sought "greater range to govern more easily."

Tensions erupted on February 4, when students took to the streets to denounce the country's rampant crime after the attempted rape of a young woman.

Over the past two months, the protest movement has progressively grown, with the capital, Caracas, in particular, seeing thousands hit the streets. Clashes have left 41 people dead and more than 600 people wounded.

"We see a break-up of the status quo that held under Chavez... a lack of clarity in management, a lack of a project," she said.

"For two months, Maduro has tried to stand in the middle of a hurricane, trying to divert attention from a profound economic and social crisis" with his accusations of an opposition plot, the analyst Fernandez said.

Last week, the president bowed to pressure from regional group UNASUR and met with the opposition. But the talks stalled over the government's refusal to consider an amnesty for arrested opposition leaders.

And the more radical wing of the opposition, which is seeking Maduro's ouster through the street protests, was absent.

On Tuesday, in his latest bid to take control of the foundering economy, the Venezuelan president announced a new "offensive," pledging to "conquer inflation" and "promote fair prices," alongside fiscal reform to better distribute taxes.

The details were to be announced April 22.

"The government needs stability, but it cannot achieve it amid the ongoing tension... it must try to re-establish economic balance," Capriles said.