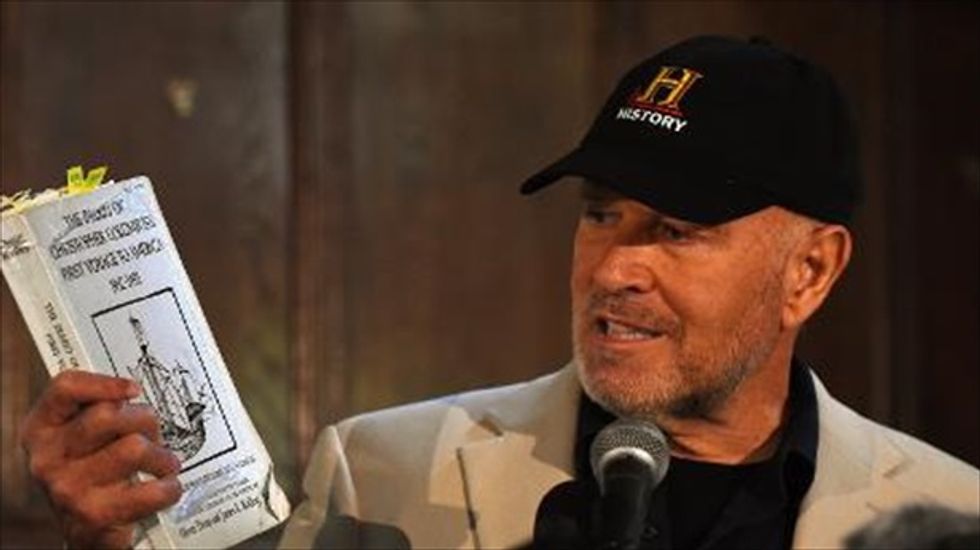 Maritime archaeological investigator Barry Clifford talks about discovering what he believes to be Columbus' ship, off the northern coast of Haiti on May 14, 2014 in New York [AFP]

The U.S. marine archaeologist who believes he has found the famous flagship of Christopher Columbus said Wednesday that salvaging it was urgent to prevent looting.

"I think this is an emergency situation. I think the ship needs to be excavated as quickly as possible, conserved and displayed to the world," underwater explorer Barry Clifford told The Explorers Club, referring to the fabled Santa Maria.

The flagship from the explorer's first voyage to the Americas was found in the area where Columbus said the Santa Maria ran aground more than 500 years ago, Clifford said Tuesday.

The researcher said the expedition he led to find the wreck unearthed sufficient proof to establish its authenticity -- 11 years after he first investigated it.

Clifford, 68, cited "overwhelming" proof that the ship was likely the Santa Maria.

"There is nobody watching the ship right now," he fretted, adding that "somebody knows where we are."

"I'm ready to leave next week if I get the green light," he added, noting that discussions were under way with Haitian authorities.

Clifford also said that he hopes Haiti -- the poorest country in the Americas -- can use the wreck's recovery as a way to help it financially. He suggested worldwide proceeds from shows of the items when recovered, go to Haitian assistance.

Bitter disagreements between Haitian politicians have threatened already painfully slow reconstruction following a devastating earthquake in January 2010 that killed around a quarter of a million people in the Caribbean nation.

Four years on, hundreds of thousands are still living in makeshift camps.

On October 12 of that year, he is believed to have landed in Guanahani, which historians have identified as an island in the Bahamas, in what is popularly called the "Discovery of the Americas."

Columbus stopped in Cuba, and then the island of Hispaniola -- home to modern day Haiti and the Dominican Republic -- before his Santa Maria hit a reef and went down December 25, 1492. The Spaniards built a fort and then in January 1493 Columbus headed back to Spain to report to Queen Isabella on his trip.

Now, "the key of finding the Santa Maria is in this book, Colombus' diario," he said. So "dissecting this book and understanding the diario" will be critical to success.

Clifford is perhaps best known as the discoverer and excavator of the world's first fully verified pirate shipwreck, the Whydah, in 1984.

He and his team first investigated the wreck off Haiti in 2003 and brought up a cannon from the depths.

Clifford told CNN that archaeologists "misdiagnosed" the cannon at the time.

So this year, he returned to the wreck with a team of experts in tow and took careful measurements and photographs of the ship.

Ivanka Trump and Jared Kushner are about to move into their new life to the so-called "billionaires bunker," an island off the coast of Florida. According to one report, however, the former White House advisers are trying to break from Dad's problematic reign of terror, the New Zealand Herald said.