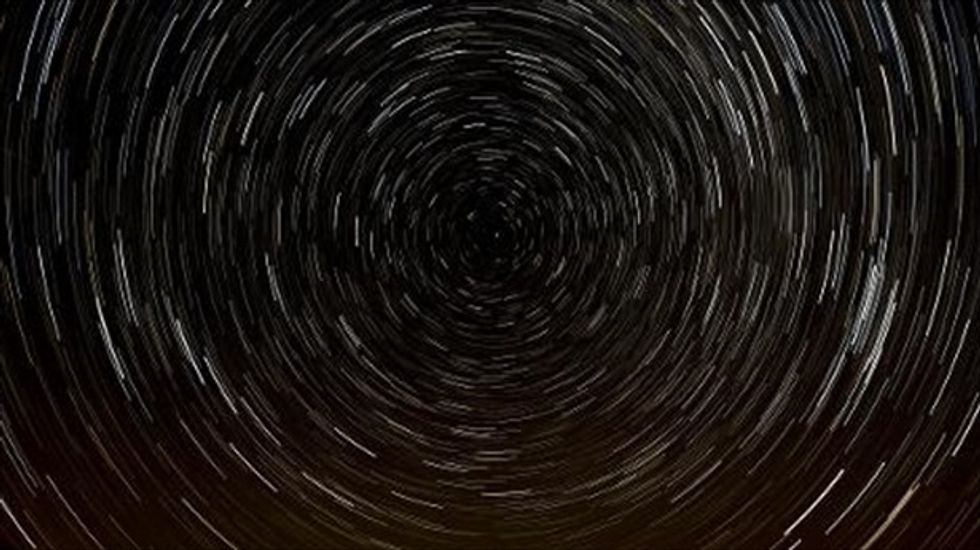 Multiple exposure picture taken on Aug. 11, 2013 shows a Perseids meteor shower in the sky on the mountains of the Sierra Norte de Madrid [AFP]

A mysterious meteor shower late Friday and early Saturday is captivating countless astronomers and amateur skywatchers with the promise of a falling-star show unlike any ever before seen.

This "potentially spectacular show," according to the U.S. Naval Observatory, should be visible in the United States and Canada, anywhere with a cloudless night sky.

Unfortunately, the rest of the world is likely to miss out.

"However, I would recommend folks get out a bit earlier, just to be safe," Cooke told AFP.

And what will it look like? Astronomers aren't exactly sure. They have never seen this one before.

"Meteor showers are like the weather. They are a little bit hard to predict," said Paul Wiegert, associate professor at the University of Western Ontario.

This meteor shower originates from the trail of dust behind a small, dim comet known as 209P/Linear. The debris gets tugged into Earth's orbit this year by the force of gravity from Jupiter.

Meteor showers consist of space rocks that burn up upon hitting the top of Earth's atmosphere, producing a bright flash of light that gives the appearance of a falling star.

"The predictions at this point are that we will see a few hundred meteors per hour," Wiegert told AFP.

"That means that you would see a few meteors per minute. So it is not a special-effects extravaganza, here, but it is in line with many of the strong annual meteor showers."

The annual Perseids meteor show that lasts for several days in August is made up of shooting stars that barrel by at a pace of 150,000 miles (241,000 kilometers) per hour.

The Camelopardalids meteors will move more slowly, traveling at around 36,000 miles (58,000 kilometers) per hour, Cooke said.

A key piece of this meteor shower mystery lies in the ancient trail of dust behind the comet, which was produced centuries ago.

"The problem we are having is, even though we can tell precisely when these particles are going to encounter Earth's orbit, we don't know how many of them there are," said Cooke.

Right now the comet does not produce much debris.

"But we have no idea what it was doing 200 years ago, because it wasn't discovered until 2004," added Cooke.

The best way to take in a meteor show is to go outdoors, lay flat on your back and look skyward, said Cooke. No special equipment necessary.

The optimal forecast for clear weather tends to be in the U.S. southwest, so a special team of NASA astronomers has been dispatched to the Arizona desert to track the meteors.

Other astronomers have flown in from Europe to observe the skies from a remote astronomy base in Saskatchewan, Canada, Cooke said.

"While a good show may fail to materialize, this appears to be the most favorable opportunity to view a meteor outburst for many years to come," said the American Meteor Society's Robert Lunsford, encouraging "everyone interested in celestial fireworks" to take a look.

"If an outburst occurs, it could be a most memorable sight as these particles are predicted to be larger than normal and may produce bright and colorful meteors."