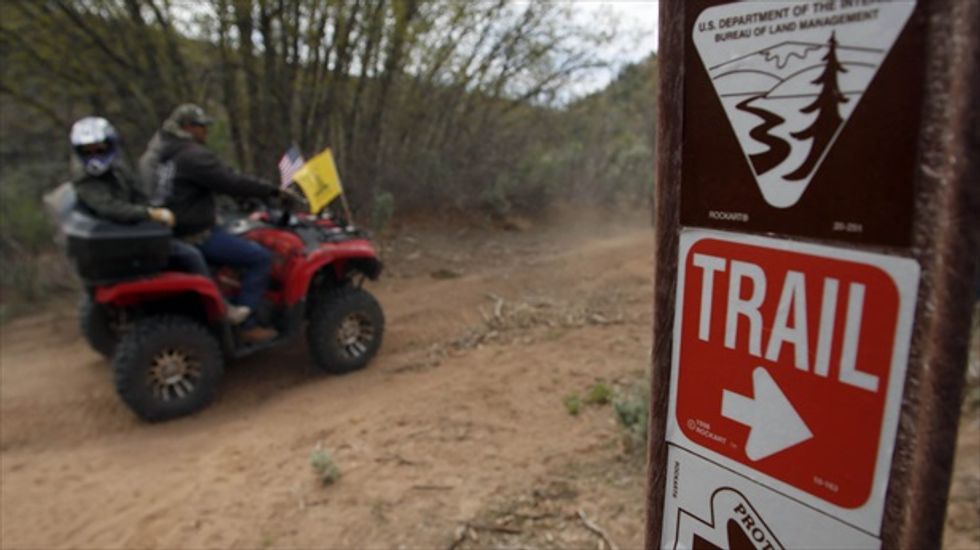 Undercover agents from the Bureau of Land Management monitored the Recapture Canyon rally and documented cases in which ATV riders broke the law by venturing into an area off-limits to motorized use, BLM spokeswoman Megan Crandall said on Tuesday.

"At the end of the BLM's investigation, all evidence will be referred to the U.S. Attorney's Office for potential civil or criminal action," she said.

About 300 protesters gathered on Saturday at a park adjacent to Recapture Canyon near Blanding, in the southeast corner of the state, calling for federal land managers to reopen the trail to recreational vehicles after seven years of government study and indecision.

The rally, coinciding with heightened political tensions over government control of public lands across the West, climaxed as dozens of protesters, some armed with guns, ventured on ATVs down a closed-off trail through Utah's red-rock desert.

Local sheriff's deputies on horseback kept watch over the protest, along with the undercover BLM agents.

San Juan County Commissioner Phil Lyman, who organized the protest ride, said on Tuesday he was aware that BLM personnel were present Saturday and is concerned about possible penalties for himself and others.

"I would have anticipated that they would take this course of action," said Lyman, who insisted he stopped his own ATV short of the closed area. He said a return visit to the area on Sunday revealed no visible signs of disturbance or damage.

The BLM closed the canyon trail to motorized use in 2007 after its agents said they found an illegally blazed trail and damage to Native American artifact sites.

San Juan County officials sought to establish a public right of way and proposed giving up another local land claim in hopes of gaining BLM approval, but the agency has yet to decide the issue.

Lyman said he now expects the event to be used to justify a continuation of the trail closure, which the agency initially said would be temporary.

"This was never an ATV agenda," Lyman said of the protest. "It had to do with the BLM not following its own process and ignoring the people most effected by its decisions."

The protest followed last month's armed standoff between supporters of renegade Nevada rancher Cliven Bundy and BLM agents who unsuccessfully sought to seize his cattle by force over his longstanding refusal to pay federal grazing fees.

[Image: ATV riders ride past a trail sign in Recapture Canyon outside Blanding, Utah, May 10, 2014. By Jim Urquhart for Reuters]