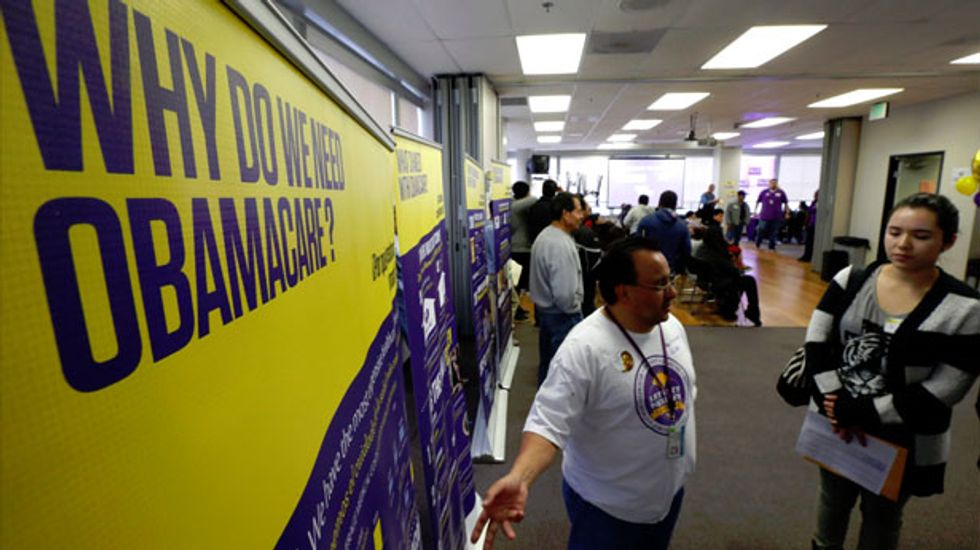 WASHINGTON (Reuters) - The percentage of adults in the United States who lack health insurance has fallen to its lowest rate since 2008, down to about 13 percent in April from a peak of 18 percent last year, according to a Gallup poll released on Monday.

The decline coincided with the October 2013 launch of the health insurance exchanges that allowed people to buy coverage on their own under the Affordable Care Act and accelerated as the deadline to buy coverage neared, the nonpartisan research organization said.

Gallup said enrollment rates could still be affected by several lingering issues such as states' handling of Medicaid coverage under the law as well as the potential for people to lose coverage by not paying their insurance premiums.

The Gallup findings came ahead of a House of Representatives hearing scheduled for Wednesday to address enrollment data.

Under the controversial 2010 law passed under President Barack Obama, Americans must have healthcare coverage or face fines. Many people have insurance from their employer or are covered by a government-based plan such as Medicare or Medicaid, but others must purchase their own.

The initial deadline to buy coverage was last month, and the Obama administration reported that more than 8 million Americans signed up for a private plan in state and federal insurance marketplaces during the law's first enrollment period. The administration had expected 7 million sign-ups.

Gallup's findings, based on interviews with more than 14,700 Americans throughout April, found the uninsured number fell most sharply among blacks and those with lower incomes.

Among blacks, about 14 percent reported being uninsured last month compared to nearly 21 percent in late 2013. The rate among those with a household income of less than $36,000 a year reported a 5.5 percentage point drop, from nearly 31 percent to 25 percent.

Hispanics, who as a group had the highest rate of those lacking coverage, also saw a significant decline in uninsured, from nearly 39 percent last year to 33 percent in April, according to the poll.

The poll had a margin of error of 1 percentage point.

While the overall numbers reflect "the surge in late health insurance sign-ups," many states' decision to expand coverage under the Medicaid insurance program for the poor also are likely a factor, Gallup said.

There also are several remaining issues that could impact the uninsured rate in the months ahead, including the potential for some people who have signed up for plans neglecting to pay their insurance premiums and losing coverage.

"It is also possible that the uninsured rate could hold steady until early 2015, when those currently without insurance sign up for policies going into effect at the beginning of next year," Gallup said.

Analysts for the Capital Alpha research firm said while the Obama administration has cited health insurance companies as saying as many as 85 to 90 percent of new enrollees have paid their premiums, the Republican-led House Energy and Commerce Committee last week said just 67 percent have paid up.

Separate findings released on Monday also found that the recent enrollment increase has not swayed people's opinion about the law, which is unpopular among Republicans and has become a campaign issue ahead of the November midterm elections.

The Pew Research Center poll found that 55 percent of those surveyed said they still disapprove of the Affordable Care Act, while 41 percent said they support it. At the same time, nearly half of those polled said they think the law's provisions are likely to remain in place.

"The share disapproving of the law ... is as high as it ever has been in the four-year history of the law," according to Pew, which conducted the poll for USA Today.

Tik Toker Brookiebaby888 usually posts humorous lifestyle videos to her 73,000 followers, but earlier this month she fimed herself doing a "magnet vaccine test." Standing in front of her camera, she explained to users that she just received her COVID-19 vaccine and wanted to see if a magnet would stick to her arm. Pressing the round magnet to her deltoid, she gasps in surprise when it barely sticks.