'Fire in the sky': Massive fires force 20,000 people to evacuate in southern California 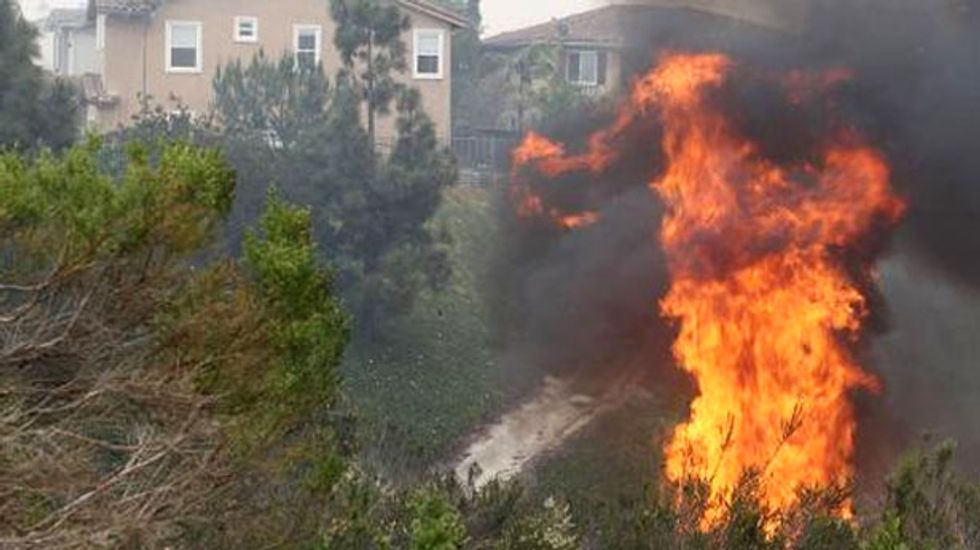 Thousands of people fled raging wildfires in roasting southern California as flames destroyed homes and triggered evacuations at a nuclear power plant, a military base and an amusement park.

The blazes, which also closed a major north-south highway, come amid record temperatures in the western US state, where the annual wildfire season typically starts much later in the year.

At least 15 buildings have been destroyed, including three homes, said Michael Davis, fire chief in the seaside resort of Carlsbad, north of San Diego.

"At times it looks like there's fire in the sky with the wind whipping back and forth," Ryan Marble told the Los Angeles Times as he waited in a long line at a gas station to get fuel to evacuate.

About a dozen non-essential staff at the San Onofre nuclear power plant were evacuated "as a precaution" due to a nearby brush fire, it said.

The owners also posted staff at the southern boundary of the plant, where they doused vegetation with water as a preventive measure.

The power company is set to decommission the San Onofre plant -- one of two in California -- after problems the could not be easily solved were found in one of its units.

About 20,000 people were asked to evacuate their homes near San Diego on Tuesday night, although the order was later lifted as firefighters got the upper hand on the blaze.

But on Wednesday, multiple fires erupted, including two at the Camp Pendleton base between Los Angeles and San Diego where a naval weapons station was evacuated, along with military housing and a school.

The fire charred brush along the nearby Interstate 5 freeway, which runs up and down the West Coast, at one point forcing its closure, although some lanes were later reopened.

In nearby Carlsbad, fires burned homes, downed power lines and forced evacuations of homeowners, as well as schoolchildren and tourists at the Legoland amusement park.

"The city of Carlsbad has done very well in clearing (brush around) those (threatened) homes, but when you have a wind-driven fire, it makes it very difficult," said Cal Fire captain Mike Mohler.

"This is a very difficult firefight. This is an urban wildland firefight, so it is definitely more difficult than you would see in a more rural setting."

California and other western US states are routinely hit with wildfires during the summer and fall, but blazes have occurred earlier in the year in recent times.

Southern California, including Los Angeles, has been bracing for record temperatures over 100 degrees Fahrenheit (38 degrees Celsius) this week, with authorities opening cooling centers for those otherwise unable to escape the heat.

A number of decades-old records for mid-May temperatures were broken Wednesday, including 96 degrees Farenheit at LAX airport and 99 degrees in downtown LA.

At Long Beach Airport, south of Los Angeles, a temperature of 101 degrees was recorded, beating the previous record of 93 degrees set in 1970.