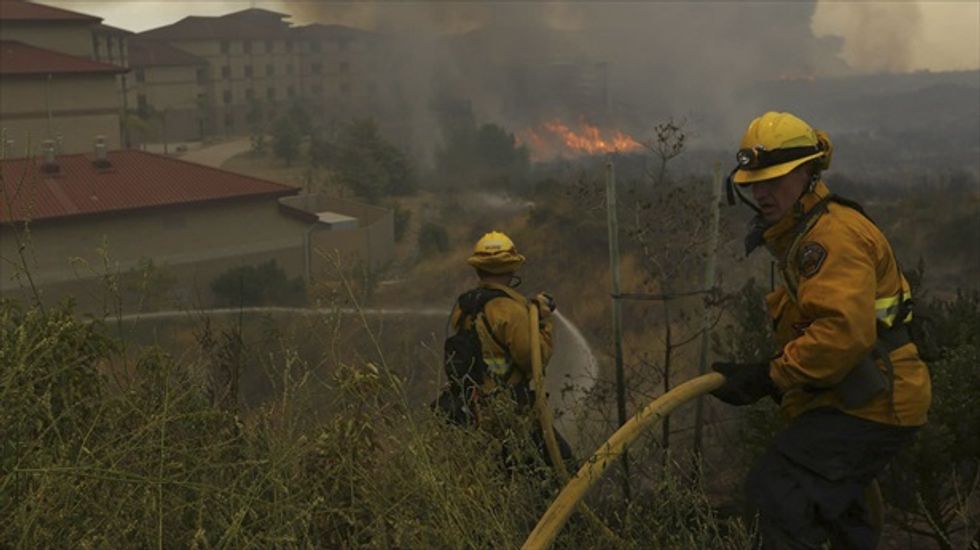 SAN DIEGO (Reuters) - Several thousand suburban San Diego residents forced to flee a wildfire threatening their community were allowed to return home on Friday as firefighters gained ground against a swarm of blazes burning in and around California's second-largest city.

The conflagrations, which marked an intense, early start to California's wildfire season, have scorched more than 30 square miles or nearly 20,000 acres of drought-parched brush this week across San Diego County, leaving dozens of homes damaged or destroyed.

A burned human corpse was found Thursday at a homeless encampment overrun by flames in the coastal town of Carlsbad, although officials said they had yet to confirm whether the individual was killed by the fire.

Two teenagers were arrested on Thursday on suspicion of setting two small fires that bystanders quickly extinguished. But police said they had no immediate reason to link the youths to any of nearly a dozen larger brush fires that raged throughout the county this week.

By morning, fire crews had managed to carve containment lines around 10 percent of the fiercest of the blazes, which has blackened some 3,000 acres since erupting on Wednesday near the town of San Marcos, north of San Diego, fire officials said.

The latest containment figure was double the 5 percent reported on Thursday amidst an unseasonable mix of record triple-digit temperatures, low humidity and hot, dry Santa Ana winds blowing in from the desert.

"We haven't seen this in 25 years, where we're fighting wind-driven fires in May," said Mike Mohler, a spokesman for the California Department of Forestry and Fire Protection.

Firefighters benefited from a break in the weather, as Santa Ana winds gave way to a cooler, moister and calmer flow of air from the coast, officials said. A further cooling trend forecast for the weekend was expected to help tame the blazes.

A U.S. Forest Service spokeswoman said fire crews had gained "a pretty good handle" on most of the fires, which forced as many as 125,000 people from their homes during the week.

One of the most damaging of those fires, in Carlsbad, was 85 percent contained on Friday. But it left property losses estimated at up to $15 million, including eight houses gutted, an 18-unit apartment building destroyed and an adjoining apartment house heavily damaged, city officials said.

Three more houses were confirmed as destroyed in San Marcos, where evacuation orders were lifted Friday for some 4,600 people in two neighborhoods but remained in effect for the bulk of homes threatened by that blaze, officials said.

Authorities were investigating how so many fires started about the same time and whether any were intentionally set.

"We all have suspicions, like the public does, when you have ... fires that started all over the county," San Diego County Sheriff Bill Gore said.

A series of four fires at Camp Pendleton Marine Base north of San Diego prompted evacuations of several outposts within the installation and led commanders to send non-essential personnel home on Friday.

[Image: Firefighters drag hoses as the Las Pulgas Fire approaches military structures on Camp Pendleton, California in this May 16, 2014 handout photo from the USMC. REUTERS/Cpl. Sarah Wolff/USMC/Handout via Reuters]