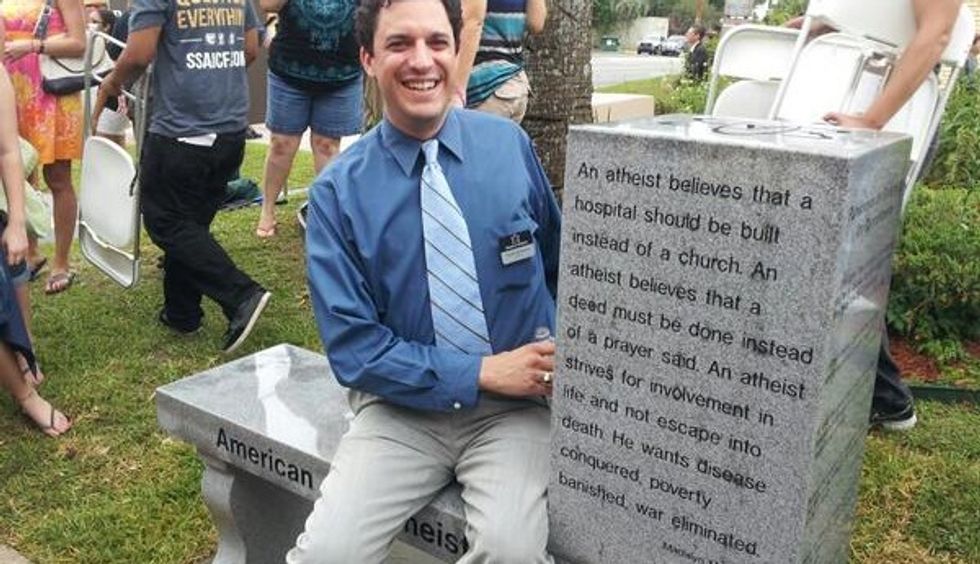 A Florida county rejected for a second time an atheist group's request for a monument to stand alongside a display of the Christian Bible's Ten Commandments at the county courthouse. According to the Washington Post, the Williston Atheists plan to continue the fight to be equally represented alongside symbols of the Christian faith.

Levy County commissioners claimed that they rejected the monument because none of the quotes carved into it are complete transcriptions of the documents from which they were excerpted.

“None of the texts on the proposed monument appear to be a reproduction of the entire text of any document or person, as required in the (county) guidelines,” said the county's report on the project.

“It is just an excuse,” said Charles Ray Sparrow of Williston atheists, who pointed out that the Ten Commandments monument did not display the entire Bible or even the Old Testament or the Book of Exodus. “We will not give up.”

The proposed monument would feature quotes by Thomas Jefferson, Benjamin Franklin and American Atheists founder Madelyn Murray O'Hair. The atheist group said that its next step will be to enlist the aid of the national group American Atheists.

American Atheists was successful in getting one such monument erected in Bradford County, FL. The group believes that if state and civic institutions are going to proudly display Christian symbols and paraphernalia, then efforts must be made to accommodate all faiths, including those which profess a lack of faith, like atheists.

At the unveiling of the Bradford County monument, American Atheists vowed to erect 50 more across the country.

American Atheists president David Silverman told the Post, "It will be up to Levy County whether they want to go to court, spend hundreds of thousands of dollars, lose, and get an atheist monument anyway."

"There are no half measures when it comes to equality. Very few things are black and white; equality is one of them: Either everyone has the same rights, or someone is getting special treatment. In this case, it's Christians. Look, we all know exactly what's going on here and there's no sense in pretending it's anything otherwise: Christians don't want equality.

They want religious morals, specifically their religious morals, dressed up and put on display—literally—outside our courthouses. They want to prop up the incorrect, misleading, and discriminatory challenge the US law is synonymous with what Christianity teaches, or even more ridiculous, that Christian teachings are the foundation of US law.

Claiming that the 10 Commandments are secular is a joke. Secular means something has no basis in religion and the 10 Commandments are explicitly religious. Come on.
This business about rejecting the monument because it doesn't quote the entire document is a red herring and an absurdly impossible standard which they themselves aren't even meeting. The truth is that they don't want the secular monument there because it's not Christian.
We know it, they know it, everyone knows it, but they're not admitting it because they're dishonest. It's called 'Lying for Jesus' or 'pious fraud' and it has a long and healthy history in Christianity -- in their minds, the ends of bringing people to Jesus justify lying to get them there. In a nation with freedom of religion and an allegedly secular government, that's crap, and we're not afraid to call them out on it.
As government officials, these people have a responsibility to work under the principles of the First Amendment, regardless of their own personal religious affiliations, and they are slapping that responsibility in the face."