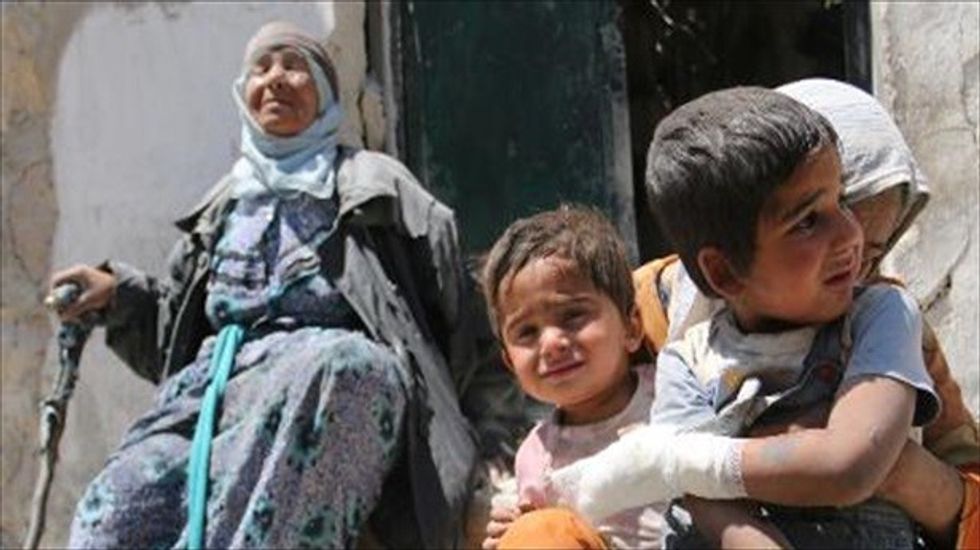 A Syrian woman comforts her children after their house in the Sahour nieghbourhood of Aleppo was bombed on May 14, 2014 [AFP]

Western and Arab nations vowed Thursday to try to funnel more aid to desperate Syrians and "ramp up" support for moderate rebels, as the U.S. backed claims that chemical arms had again been unleashed in the conflict.

The Friends of Syria group meeting in London also poured scorn on Syrian President Bashar al-Assad's plan to press ahead with presidential elections on June 3, despite the raging civil war.

As they met, a car bomb killed at least 43 people on the Syrian side of the border with Turkey.

Assad's "staged elections are a farce, they’re an insult; they are a fraud", US Secretary of State John Kerry told reporters after the talks.

A joint statement from the 11 countries at the London talks described the election as "illegitimate" and "a parody of democracy" urging the international community to reject the results.

Ministers from the Friends of Syria group -- Britain, Egypt, France, Germany, Italy, Jordan, Qatar, Saudi Arabia, Turkey, the United Arab Emirates and the United States -- were meeting for the first time since January.

"We have to redouble our efforts, all of us, in support of the moderate opposition in order to bring about a peaceful resolution that the people of Syria want," Kerry said.

British Foreign Secretary William Hague added: "We are of course united in our disgust and anger at what is happening in Syria, and the regime’s utter disregard for human life."

Three years into the war which has claimed 150,000 lives, Hague said the group was determined "to step up our efforts to deliver humanitarian aid across borders and across lines irrespective of the consent of the regime".

The United States, which has put up some $1.7 billion in humanitarian aid, also voiced frustration at the bottleneck in getting food and supplies to desperate civilians.

"We’re going to join with other countries in an effort to try to guarantee accountability through the UN in making that happen."

With 3.5 million Syrians in areas that aid convoys are able to reach only sporadically, and with over 240,000 stuck in besieged communities, blockades have become a powerful tool by both sides.

Kerry also revealed that he had seen "raw data" which suggested chlorine had been used as a chemical weapon in Syria, supporting accusations made by France.

And he insisted that if such use was proven there would be accountability before organisations such as the International Criminal Court.

French Foreign Minister Laurent Fabius suggested the Assad regime had used chemical weapons, including chlorine, 14 times since agreeing last year to give up its arsenal.

In a diplomatic boost to the Syrian opposition, Britain announced it had upgraded the status of their London office to a mission "in recognition of the strength of our partnership" with the National Coalition headed by Ahmad Jarba.

Jarba took part in the London talks after attending a week of high-level meetings in the US.

In Washington, Jarba pleaded for anti-aircraft missiles to shoot down regime aircraft which are dropping deadly barrel bombs on Syrian civilians.

Kerry refused to be drawn on whether the U.S. would meet Jarba's request but insisted that "every facet of what can be done is going to be ramped up".

More blood was shed in Syria on Thursday, when a car bomb tore through a crowd at the Bab al-Salama border crossing with Turkey, the Syrian Observatory for Human Rights said.

At least 43 civilians were killed, including at least five women and three children.

Meanwhile, a reporter and a photographer for British daily The Times, Anthony Loyd and photographer Jack Hill, were recovering in Turkey on Thursday after being kidnapped, shot and beaten while in Syria.

Also, five aid workers who were kidnapped in January were freed Thursday, according to medical charity Medecins Sans Frontieres.