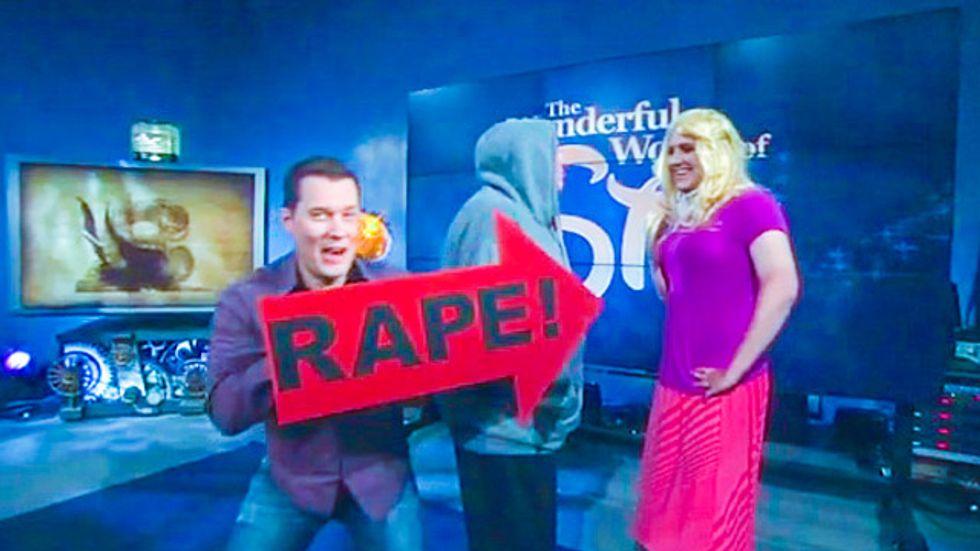 Glenn Beck's The Blaze network recently created a comedy skit to illustrate a theory that women are not raped as often as studies have shown.

Just days after California shooter Elliot Rodger used his hatred of women as an excuse to kill six people, Glenn Beck presented a pre-recorded segment where co-host Stu Burguiere tries to prove that one and five women have not been victims of sexual assault.

The segment had been originally broadcast on May 21, but Beck re-aired it as a response to people who were saying America had a problem with violence against women in light of the California shooting spree.

In the video clip, Burguiere argues that a study that was recently pointed out by the White House was faulty because it was an online survey. He argued that the studied wrongly classified sexual encounters as rapes just because the women were drunk or high.

"What's going on here is that the president is saying that these women were raped, and these women are saying they weren't," Burguiere insists, adding that a results of a second study could also not be trust because of "incoherent wording."

"It is possible to have consensual sex while drunk or high," the host opines. "Watch any beer commercial."

And to "illustrate" his point, Burguiere introduces a man in a ridiculous blonde wig who is subjected to different requests for sex from another man wearing a hoodie. In each case, Burguiere jumps out with a large red arrow, which has the word "rape" printed on it.

"Guuuuesss what? That's rape!" Burguiere exclaims after on example. "Repeatedly asking for sex to get sex is the same as rape. That's persistence rape."

"Are those things annoying? Yes," he concludes. "But is convincing someone to sleep with you because you're sad the equivalent of a sexual assault? I mean, that's just absurd."

Wonkette's Gary Legum noted that the segment was the "equivalent of fighting a fire by spraying diet soda on a building next door to the one that is actually burning."

"The whole video is really the perfect example of the wingnut mind at work," Legum added. "[F]ind a complicated concept that requires nuance and work to fully interpret and understand, get it all twisted up in your brain until you can’t stand it, then deal with your stupidity by saying 'f*ck it' and reducing the complicated issue to a series of flip and distorted observations presented in a douchey, sneering manner meant to convey your superior intelligence and the obvious idiocy of the opposing argument."

Watch the video below from The Blaze, first broadcast May 21, 2014.

Watch the video below from The Glenn Beck Program, broadcast May 27, 2014.