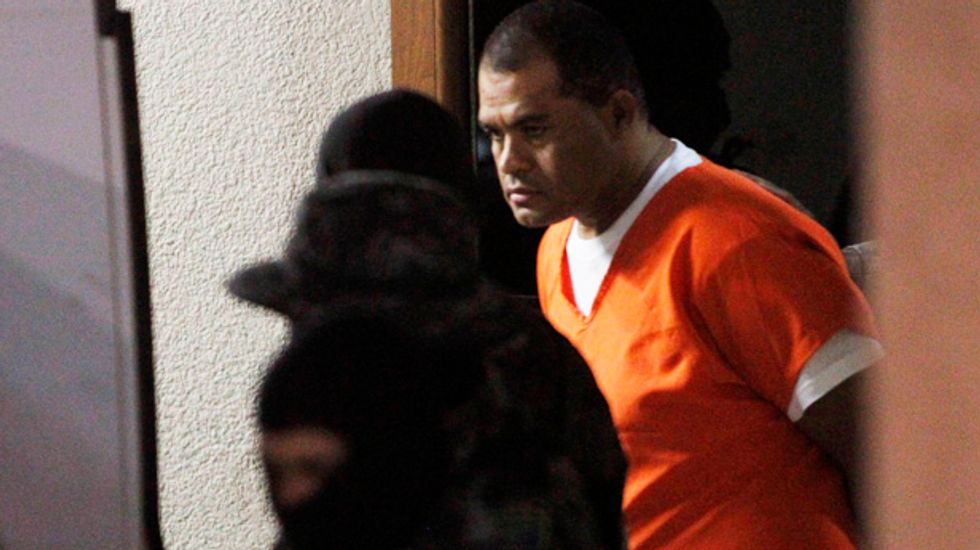 Carlos Arnaldo Lobo alias "Negro Lobo" (R) is escorted by soldiers after a presentation at a court in Tegucigalpa April 10, 2014. Lobo, who is accused of drug trafficking in a federal court of the U.S. state of Florida, has been sanctioned under the Foreign Narcotics Kingpin Designation Act by the U.S. Treasury Department, according to local media. Lobo is part of a list of ten Honduran nationals whose extradition has been requested by the U.S. government. Picture taken April 10, 2014. REUTERS/Jorge Cabrera (HONDURAS - Tags: CRIME LAW CIVIL UNREST DRUGS SOCIETY)

TEGUCIGALPA (Reuters) - Honduras said it will extradite to the United States a drug trafficker who worked for Mexico's powerful Sinaloa Cartel, making him the first such case since the country changed the law to allow the process two years ago.

Carlos Arnoldo Lobo, who the U.S. government says trafficked multi-tonne loads of cocaine from Colombia for Honduran, Guatemalan and Mexican gangs, will be extradited next week, a spokesman for the Honduran justice department said after a decision by the country's Supreme Court late on Friday.

The U.S. Treasury Department said Lobo's clients included the Sinaloa Cartel, which has been at the forefront of cocaine trafficking from Mexico into the United States.

Like other drug gangs, the cartel has come under increasing pressure from Mexico's government and its longstanding boss, Joaquin "Shorty" Guzman, was captured by Mexican security forces in February.

Lobo was captured in the last week of March and Honduran prosecutors have seized assets controlled by the trafficker worth in excess of $25 million. He has been indicted on drug trafficking charges in the Southern District of Florida.