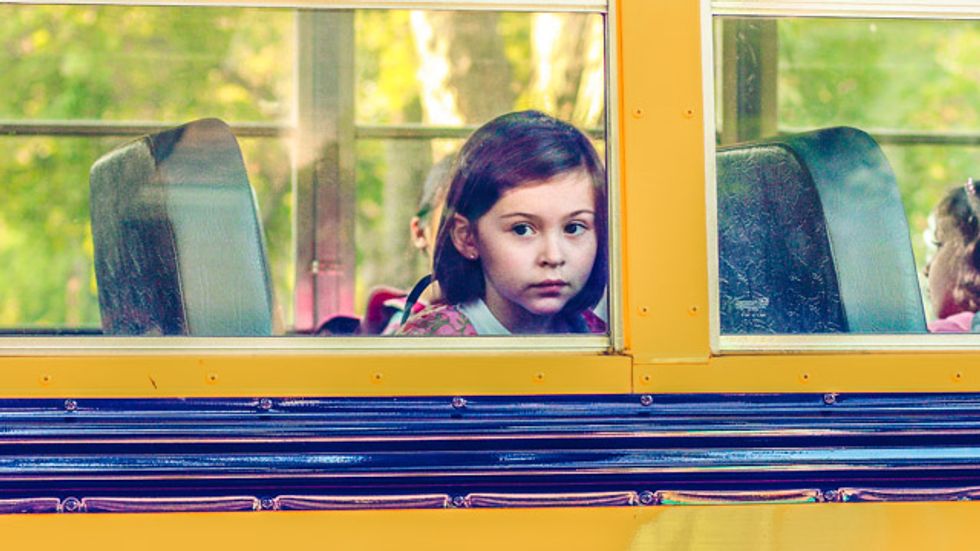 [Photo of girl on bus via Flickr/adwriter]

The Commonwealth of Kentucky may have violated its constitution by spending over $18 million in taxpayer money to bus students to religious and other private schools -- and lawmakers are planning to spend even more.

Financial records outlined by the Lexington Herald-Leader last week showed that $18 million had been spent on busing children to mostly religious schools in just two dozen counties over the last six years.

In one example, the state used $182,943 in taxpayer money last year to bus 257 students to Catholic schools, including Bethlehem High School in Bardstown. The paper reported that local government also got in on the act when the Nelson County Fiscal Court spent $49,388 matching state funds.

Section 189 of Kentucky's Constitution is pretty clear that no taxpayer funds should be used to "aid" any religious school.

No portion of any fund or tax now existing, or that may hereafter be raised or levied for educational purposes, shall be appropriated to, or used by, or in aid of, any church, sectarian or denominational school.

The Kentucky General Assembly, however, voted this year to increase the busing program subsidy by 17 percent, from $2.9 million to $3.5 million.

"Do I have a problem with private school students getting public money to get to private schools? Yes, I do," Democratic state Rep. Kelly Flood told the Herald-Leader.

"These are families who have chosen not to attend public schools, which is certainly their right. But we are under no obligation as a state to pay for their choice," Flood explained. "Meanwhile, the transportation needs of our public school systems are pressing and growing, and I would like for that money to be redirected to help our public schools."

Catholic Conference of Kentucky Executive Director Rev. Patrick Delahanty argued that Kentucky parents deserved a choice because they "frankly don't trust the government, and they don't want their kids to be in a government school, brainwashed by secularism."

And things are not expected to change because the Kentucky Supreme Court has already said in a 1999 ruling that the policy was constitutional "as long as the aid provided flows directly and exclusively to the child and only indirectly, if at all, to the parochial school."

"How does having the taxpayers ... pay for the transportation of Catholic school children make this transportation any safer than if it were paid for by either their parents or the Archdiocese itself?" dissenting Justice Robert Stephens wrote in his objection to the 4-3 decision. "As a firm believer in the separation of church and state for the protection of both institutions, I am sorry to see this day has come to pass,"

"While with a wink and a nod, the majority has permitted the funding of private religious students' transportation costs to assure the 'safety' of the students, I believe that same wink and nod shall return to the detriment of those who it would appear to be serving in this matter," Stephens said.

Watch the video below from WDRB, broadcast April 4, 2013.

[Photo of girl on bus via Flickr/adwriter]