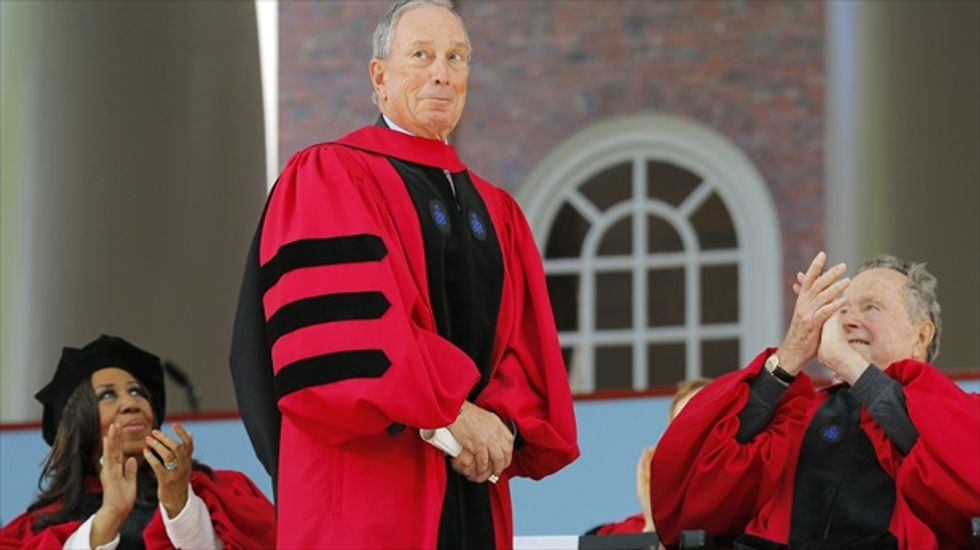 By Scott Malone and Daniel Lovering

BOSTON (Reuters) - Former New York Mayor Michael Bloomberg used his commencement address at Harvard University on Thursday to bash a U.S. academic culture that he described as increasingly intolerant of ideas from outside a narrow liberal spectrum.

Citing the campus protests that caused luminaries including former Secretary of State Condoleezza Rice and International Monetary Fund head Christine Lagarde to back out of planned speeches, Bloomberg criticized students and faculty for being hostile to ideas that clashed with their own ideologies.

Standing amid the centuries-old stone buildings of Harvard Yard, he compared the atmosphere in U.S. academia to that which prevailed during Senator Joseph McCarthy's 1950s campaign to ferret out Communists in public life.

"In the 1950s the right wing was attempting to repress left-wing ideas," said Bloomberg, who started his career on Wall Street before launching the news and data company that bears his name. "Today on many college campuses it is liberals trying to repress conservative ideas even as conservative faculty members are at risk of becoming an endangered species.

He noted that during the 2012 presidential election, some 96 percent of political contributions from faculty and staff at Ivy League universities such as Harvard went to Democratic candidate Barack Obama, with few backing Republican Mitt Romney.

Bloomberg's speech followed commencement speech cancellations by Lagarde, who backed out of an address at Smith College after a student petition that criticized the IMF for supporting "imperialist and patriarchal systems," and by Rice, who backed out of speaking at Rutgers University after student protests over her role in the Iraq war.

Bloomberg also mentioned Brandeis University, which dropped plans to award an honorary degree to Ayaan Hirsi Ali, a Somali-born women's rights activist who has drawn fire for her sharply worded criticisms of Islam.

Bloomberg, who started out as a Democrat but became a Republican in his initial bid to become the mayor of New York and later became an Independent, since leaving office in January has vowed to spend $50 million of his fortune on a gun-control initiative he intends to stand as a counterweight to the powerful National Rifle Association.

He said that an unwillingness to listen to political opponents has led to gridlock in Washington.

"The two parties decide those questions not by engaging with one another but by trying to shout each other down and by trying to repress and undermine the research that counters their ideology," he said. "The more our universities emulate that model the worse off we will be as a society."

Attendees expressed surprise at the tone of his speech.

"It was more political than I expected," said Tina Schwartz, 36, whose husband graduated from Harvard. She said she appreciated Bloomberg's points about "standing up to the liberals on campus and being more open-minded to speakers."

"You still have an obligation to object about actions, but not about opinions," said Louria, who graduated from Harvard in 1949.