Michelle Obama: Barack and I see our own daughters in Nigeria schoolgirls 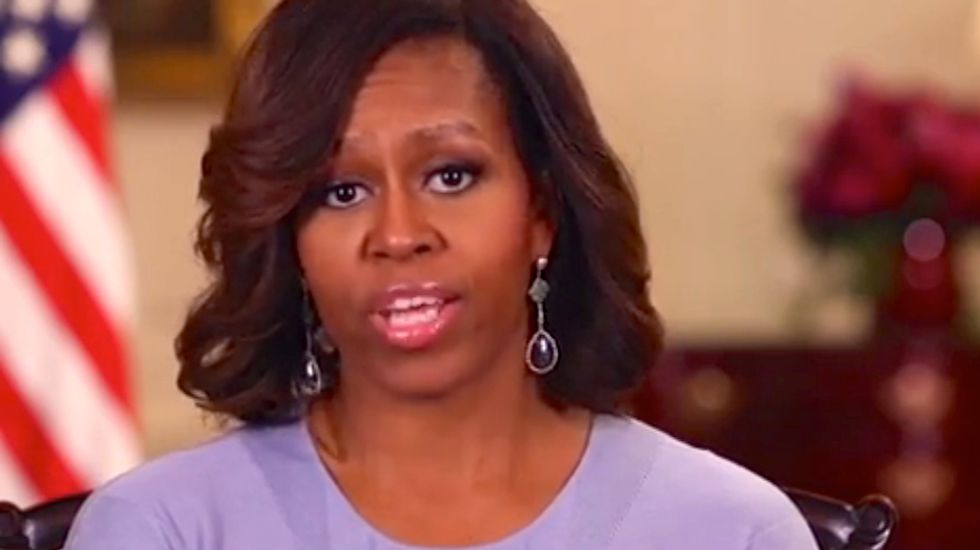 America's first lady uses weekly national address to express heartbreak and outrage at Boko Haram kidnappings, vowing that US was doing everything possible to help rescue

Michelle Obama has taken the rare step of delivering her husband's weekly video address to express outrage over the plight of more than 250 schoolgirls kidnapped by Islamist militants in Nigeria.

The US first lady began the address, which is broadcast on radio and uploaded to YouTube, by wishing Americans a happy Mother's Day, before saying: "Like millions of people across the globe, my husband and I are outraged and heartbroken over the kidnapping of more than 200 Nigerian girls from their school dormitory in the middle of the night.

"This unconscionable act was committed by a terrorist group determined to keep these girls from getting an education – grown men attempting to snuff out the aspirations of young girls."

The militant Islamist group Boko Haram kidnapped 276 girls from a secondary school in Chibok in remote northeastern Nigeria on 14 April and has threatened to sell them into slavery, while eight girls were taken from another village earlier this week.

The abductions have drawn international condemnation and promises of special forces assistance to find the girls from the US and UK. The Nigerian president, Goodluck Jonathan, said on Friday he believed the girls were still in his country.

"I want you to know that Barack has directed our government to do everything possible to support the Nigerian government's efforts to find these girls and bring them home," the first lady said. "In these girls, Barack and I see our own daughters. We see their hopes, their dreams, and we can only imagine the anguish their parents are feeling right now."

The first lady noted that the school where the girls were abducted had been closed recently because of terrorist threats, but the girls insisted on coming back to take exams. "They were so determined to move to the next level of their education … so determined to one day build careers of their own and make their families and communities proud," she said.

"And what happened in Nigeria was not an isolated incident. It's a story we see every day as girls around the world risk their lives to pursue their ambitions."

The White House deputy spokesman Eric Schultz said: "As the mother of two young daughters, Mrs Obama is taking up the opportunity to express outrage and heartbreak the president and she share over the kidnapping.

"The first lady hopes that the courage of these young girls serves as an inspiration … and a call to action for people around the world to fight to ensure that every girl receives the education that is their birthright", he added.

A team of UK experts has arrived in Nigeria to help with the hunt for kidnapped schoolgirls. A Foreign Office spokesman said: "The team will be considering not just the recent incidents but also longer-term counter-terrorism solutions to prevent such attacks in the future and defeat Boko Haram."

The move comes after Amnesty International claimed Nigerian commanders were warned that armed men were beginning to arrive near Chibok, where the girls were kidnapped from their school, but the military were unable to raise enough troops to respond. "This abduction could have been prevented," said Amnesty spokeswoman Susanna Flood.

The Nigerian government, which have come under growing criticism at home and from abroad for being too slow to react, says it does not believe the Amnesty allegations are true but they are investigating.

Speaking to Sky News' special correspondent Alex Crawford, Shettima Haruma, whose daughter was among those taken, said he was angry with the Nigerian government's response.

He said: "We beg Nigerians, those in another country like America or [Britain] … it's three weeks, nearly one month … [and we haven't] seen any letters from our daughters."

Sky News reported that the search for the schoolgirls was closing in on the huge Sambisa forest near the border with Cameroon and that the girls had been divided into at least four groups, which would make a rescue more difficult.