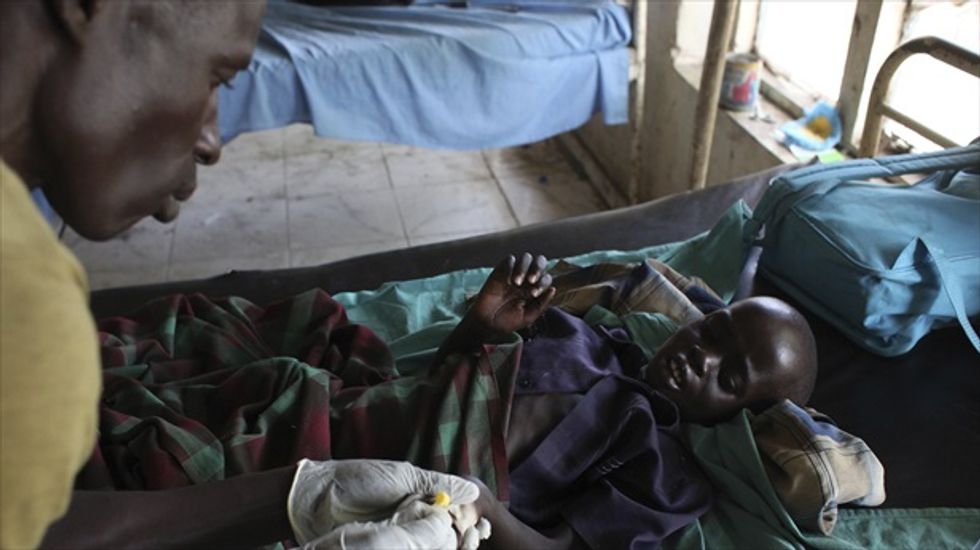 WASHINGTON (Reuters) - Scientists seeking a vaccine against malaria, which kills a child every minute in Africa, have developed a promising new approach intended to imprison the disease-causing parasites inside the red blood cells they infect.

The researchers said on Thursday an experimental vaccine based on this idea protected mice in five trials and will be tested on lab monkeys beginning in the next four to six weeks.

Dr. Jonathan Kurtis, director of Rhode Island Hospital's Center for International Health Research, said if the monkey trials go well, a so-called Phase I clinical trial testing the vaccine in a small group of people could begin within a year and a half.

Using blood samples and epidemiological data collected from hundreds of children in Tanzania, where malaria is endemic, by Drs. Patrick Duffy and Michal Fried of the U.S. National Institutes of Health, the researchers pinpointed a protein, dubbed PfSEA-1, that the parasites need in order to escape from inside red blood cells they infect as they cause malaria.

The researchers then found that antibodies sent by the body's immune system to take action against this protein managed to trap the parasites inside the red blood cells, blocking the progression of the disease.

Scientists have struggled for years to create an effective vaccine against malaria, a mosquito-borne disease that the U.N. World Health Organization estimates kills 627,000 people a year, mostly children in sub-Saharan Africa.

"It's profoundly important to develop an effective malaria vaccine," said Dr. Anthony Fauci, director of the NIH's National Institute of Allergy and Infectious Diseases, calling the study "a novel and different type of an approach toward a vaccine."

"Since the malaria parasite has such a complex replication cycle, there are multiple points in that replication cycle that are vulnerable to interference by an antibody or some response that can be induced by a vaccine," Fauci told Reuters.

Microscopic malaria parasites are carried in the saliva of female mosquitoes and enter a person's bloodstream through the insect's bite. The parasites pass through the liver and infect red blood cells. They replicate wildly in these cells and cause them to rupture, flooding the body with more and more parasites.

Two existing approaches to vaccine development have sought to block the parasites from entering the liver or red blood cells. The new approach instead tries to bottle them up inside the red blood cells - or, as Kurtis put it, "trap them inside a burning house."

If the parasites remain trapped, they can be harmlessly gobbled up in the spleen by immune system cells called macrophages, Kurtis said.

The researchers developed a vaccine that targeted PfSEA-1 and tried it on mice. In five experiments, vaccinated mice that were exposed to malaria had parasite levels four times lower than unvaccinated mice and survived twice as long afterward.

The researchers then looked at blood samples from some of the Tanzanian children. Roughly one in 20 had naturally occurring levels of the antibodies that target PfSEA-1, and among these children there were no cases of severe malaria.

The researchers also examined blood samples from 138 boys and men from a malaria-endemic area of Kenya. Those with detectable levels of naturally occurring antibodies to PfSEA-1 had 50 percent lower parasite levels than those who did not.

Kurtis expressed hope about the prospects of a vaccine targeting this protein, but said the best future vaccine likely would combine this approach with others to attack the parasite on several fronts. He noted that there is currently no licensed vaccine for human parasitic infection.

The study was published in the journal Science.

[Image: An UPDF medic takes care of a malnourished child with malaria in a hospital in Bor, in this March 15, 2014 file photo. By Andreea Campeanu for Reuters/Files]