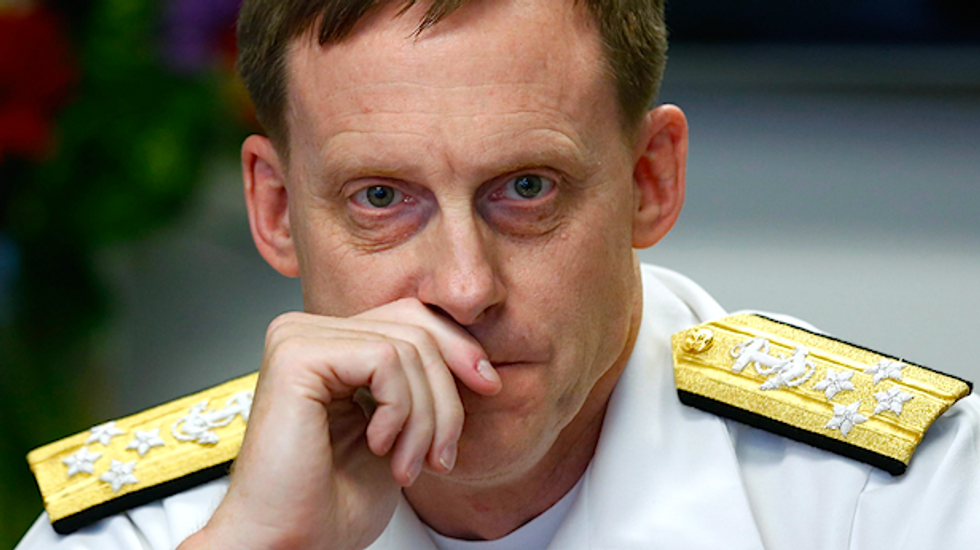 As U.S. National Security Agency Director Mike Rogers seeks to repair the damage to the agency caused by leaks about its electronic spying programs, the abuses of government revealed in the wake of the Watergate scandal are very much on his mind.

As a teenager growing up in Chicago in the 1970s, Rogers recalls watching news broadcasts with his family and being horrified by how the CIA, FBI and NSA had illegally spied on hundreds of thousands of Americans.

"I can remember being very impassioned with my father, and telling him: 'Dad, what kind of nation would we ever want to be that would allow something like this to happen?'" Rogers recalled.

Four decades later, and six weeks into his new job as director of the NSA, the agency is facing similar accusations: that it has used its vast and intrusive surveillance powers to trample on privacy.

Unlike 1975's congressional investigation into intelligence gathering by the CIA, FBI and NSA, today's allegations of rampant U.S. surveillance have unfolded on a global scale, damaging American relations from Brazil to Germany and Indonesia.

While Rogers dismissed direct comparisons -- noting that the NSA programs exposed by former contractor Edward Snowden last year had all been deemed lawful -- he said he understood the concerns that have been raised about balancing individual privacy rights against security needs.

"We have been down that road in our history, and it has not always turned out well. I have no desire to be part of that," Rogers, 54, told the Reuters Cybersecurity Summit in Washington.

Still, Rogers' declaration that he wants to continue the NSA's controversial search of phone records, known as metadata, has prompted critics to question if the new director really favors change at all.

In his first interview since taking office, Rogers, a four-star Navy admiral, stressed the need for transparency and accountability. To repair the agency's ties with internet and telecom firms, as well as U.S. allies, the NSA has to shed some of its secretive culture and be more candid about what it is doing, he said.

Some say Rogers' position falls short of what is needed. "I don't think it's a public relations problem. What they have is a trust problem," said cryptography author Bruce Schneier, who worked with the Guardian newspaper to analyze some of Snowden's documents.

Schneier said that transparency would have to be imposed from above -- either by the White House or Congress -- for it to be credible.

Highly thought of in Navy and intelligence circles, Rogers is a career cryptologist -- a specialist in the breaking and making of codes -- with little experience in the public spotlight.

During the 70-minute Reuters interview, he seemed confident but guarded, speaking in sharply punctuated sentences and batting away questions about events that took place before he took over the Fort Meade, Maryland-based NSA.

"I'm not focused on wasting my time on what was or has been," said Rogers, who is also commander of the U.S. military's Cyber Command.

Arizona Republican Senator John McCain welcomed Roger's call for greater transparency and accountability, but said he remained skeptical that any administration official would be held responsible for any NSA programs that exceeded congressional authority.

"I expect Admiral Rogers to be much more transparent," McCain told reporters on Wednesday. "Do I believe that people will be punished? Nobody's ever been punished for the torture of prisoners by the CIA."

With short-cropped hair that as yet shows no signs of gray, Rogers can be alternately deadly serious - talking about "mission sets" and "second-order effects" - and self-deprecating.

Returning two years ago to New Trier High School in Chicago's suburbs, where he graduated in 1977, Rogers told a class: "I was terrible at math," according to an account in the Chicago Sun-Times.

Failing to gain admission to the U.S. Naval Academy, but determined to be a Navy officer, Rogers enrolled in Auburn University and went through the Naval Reserve Officers Training Corps.

His career was unusual in other respects. After six years as a surface warfare officer, considered the Navy's premier career path, he became a cryptologist or "crippy." Rogers has now risen higher in the Navy than any cryptologist before him.

A former senior U.S. intelligence official who knows Rogers said talent spotters in the Navy channeled him into intelligence duties broader than cryptology.

Underscoring the sensitivities surrounding the NSA post, President Barack Obama personally interviewed Rogers before nominating him for the job.

Rogers sailed through his Senate confirmation hearing, although only after having to explain how hackers believed to be from Iran were able to penetrate a Navy computer network.

Rogers faces big challenges. Morale among the NSA's tens of thousands of employees has taken a hit, and Rogers said many people in the agency found it both uncomfortable and perplexing to be under public scrutiny.

Retired Air Force General Michael Hayden, a former director of both the NSA and CIA, said it was instructive that Obama chose Rogers, and veteran NSA civilian Richard Ledgett to be his deputy, at a time when the president was under enormous pressure to conduct a house cleaning of the agency.

It was, Hayden said, a "vote of confidence" in the NSA and its staff, and a sign that, despite some reforms, Obama plans no sharp cutback in the agency's aggressive global surveillance.

"They were the obvious choices before Snowden, and they were the choices after Snowden. This is a powerful message to send to the workforce," Hayden said.

A second former senior U.S. intelligence official who knows Rogers predicted he would be a "much more inclusive" leader than his predecessor, the sometimes-combative Army General Keith Alexander, who led the agency for more than eight years.

Rogers, who has been married to his wife, Dana, for 29 years and has a son in the Navy and one in college, may have days where he wishes he had neither job.

In a video message to NSA employees after he took command, Rogers is said to have remarked that he had promised his wife he would be retired by now.