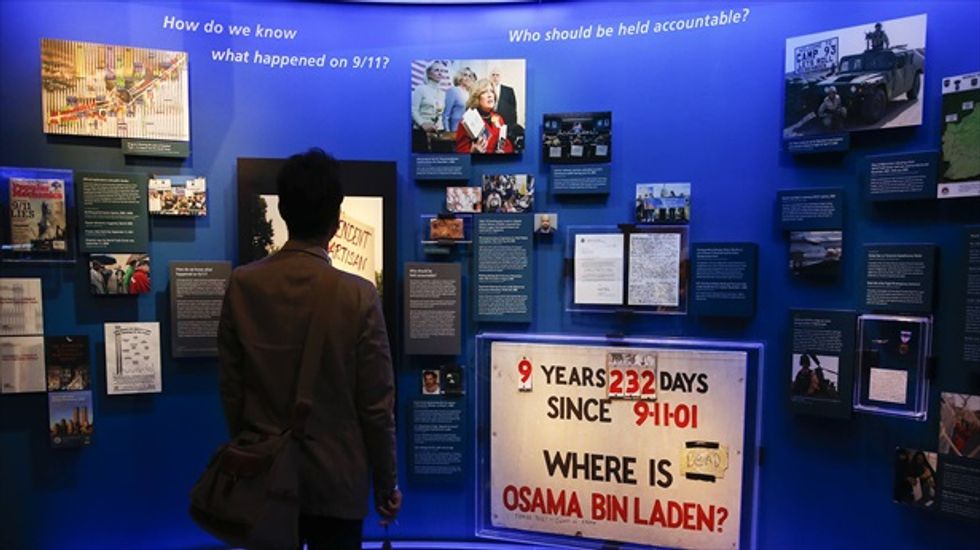 NEW YORK (Reuters) - A museum memorializing the September 11, 2001, attacks opens this week to victims' family members and next week to the public, displaying artifacts from mangled columns recalling the enormity of that fateful day to shattered eyeglasses recalling its personal pain.

Visitors to the National September 11 Memorial Museum in downtown Manhattan descend to exhibitions several stories below street level to be greeted by a Hudson River retaining wall that survived the attacks and a column scrawled with numbers of the police and firefighters who did not.

The museum is the culmination of eight years' work designing the exhibits, collecting artifacts and settling innumerable disputes over how best to document the day when hijacked planes slammed into the World Trade Center, the Pentagon and an open field near Shanksville, Pennsylvania, killing nearly 3,000 people.

Battles over oversight and funding slowed construction even as reconstruction of the larger World Trade Center site was getting under way. In October 2012, the museum's lower levels were flooded in Superstorm Sandy.

Among the most moving displays was a fire engine badly battered in the collapse of the twin towers, he said.

"All I could think of was, I wonder what happened to the firefighters that were assigned that day on that engine and whether they survived and what were their last thoughts if they didn't," he said.

The museum helps to convey the events and emotions of September 11 by using audio such as telephone messages left to loved ones from those who would die in the towers, and cockpit recordings from the doomed planes.

Some 35,000 people closely involved in creating the museum, including victims' relatives, will get a first look in the coming week. Doors open to the public on May 21.

"It is incredible, and it will wind up affecting different people in different ways, depending on their experiences," said Joel Shapiro, whose wife, Sareve Dukat, died in the South Tower.

Shapiro plans to be a docent at the museum, which sought input from curators, educators, architects, preservationists, family members, survivors, first responders, local residents, business owners and others.

A recent controversy involved moving unidentified remains of victims to the museum site. Some family members said it was wrong to store them at what is essentially a tourist site.

"Part of the ongoing drama of the site is that you have 3,000 families, and they don't agree with each other," said Richard Hankin, director of a documentary film "16 Acres" that traced the contentious rebuilding process.

More than half of the $700 million needed to build the museum and memorial was raised privately, and about $250 million came from federal disaster funding.

[Image: A man stands in the historical exhibition section of the National September 11 Memorial & Museum during a press preview in New York May 14, 2014. By Shannon Stapleton for Reuters.]