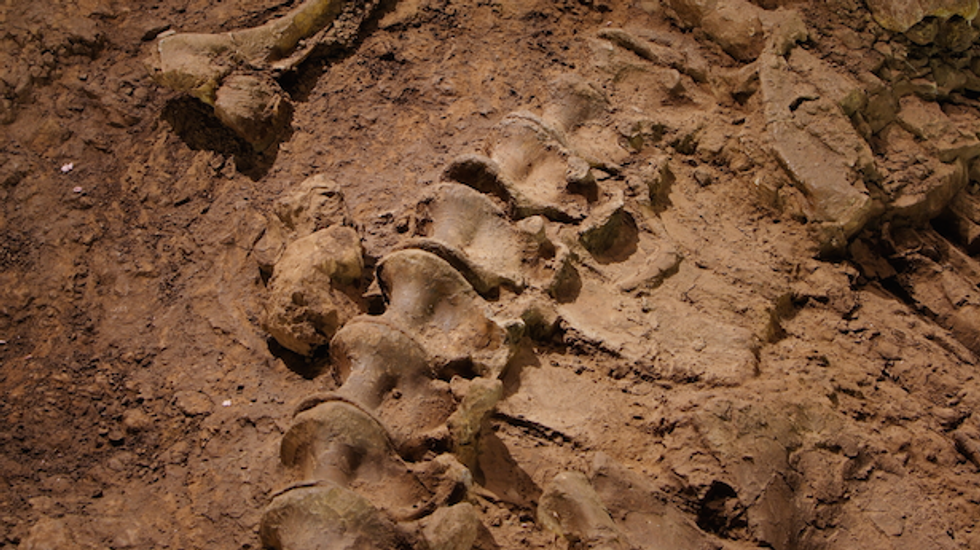 It's not exactly small at 30 feet long, but you might want to call this newly identified dinosaur the littlest giant.

Scientists in Argentina on Wednesday announced the discovery of the fossilized remains of a unique member of the famous long-necked, plant-munching dinosaurs known as sauropods, the largest land creatures in Earth's history.

The dinosaur, named Leinkupal laticauda, may be the smallest of the sauropod family called diplodocids, typified by the well-known Diplodocus, which lived in North America, they said.

It also is the first of them found in South America. It lived about 140 million years ago, millions of years after scientists had previously thought diplodocids had disappeared, according to Argentine paleontologist Pablo Gallina, one of the researchers.

"Finding Leinkupal was incredibly exciting since we never though it possible. A diplodocid in South America is as strange as finding a T. rex in Patagonia," added another of the scientists, Argentine paleontologist Sebastián Apesteguía, referring to the North American dinosaur predator Tyrannosaurus rex.

Apesteguía called Leinkupal "a very small guy in a lineage of giants."

"We don't know the weight but considering that many of its bones were very delicate and light and most of its body was formed by neck and tail, the weight could not be impressive, actually no more than an elephant," Apesteguía said.

Sauropods, one of the most successful dinosaur groups, were recognizable for their long necks and tails, huge bodies and pillar-like legs.

Some sauropods like Argentinosaurus, which also lived in Argentina but 50 million years later, weighed up to 90 tons and measured more than 100 feet long. The last sauropods lived until the very end of the age of dinosaurs, about 65 million years ago.

Diplodocids lived in North America, Europe and Africa during the Jurassic period, the middle of the three acts of the age of dinosaurs, Gallina said. Until now, they were thought to have gone extinct by the end of the Jurassic, about 145 million years ago.

But Leinkupal shows that this family lived on at least into the earliest stages of the Cretaceous period.

Diplodocids were more slender than some other families of sauropods. Their back legs were longer than their front legs, and they boasted extremely long necks and whip-like tails that they may have used to fend off predators.

At the time, North America was completely isolated from South America, and the Atlantic Ocean was beginning to open and separate South America from Africa.

Leinkupal lived in a semiarid environment south of a large desert, the researchers said. Its incomplete remains were found in Patagonia -- a region renowned for its dinosaur finds -- in 2010 and 2012 in Argentina's Neuquen province, they added.

Its genus name, Leinkupal, means "vanishing family" in the region's indigenous Mapuche language -- signifying the disappearance of this family of dinosaurs. Its species name, laticauda, means "wide tail" in Latin.

The findings were published in the journal PLOS ONE.

[Image: Dinosaur Fossil in rock and sand,yunnan via Shutterstock]