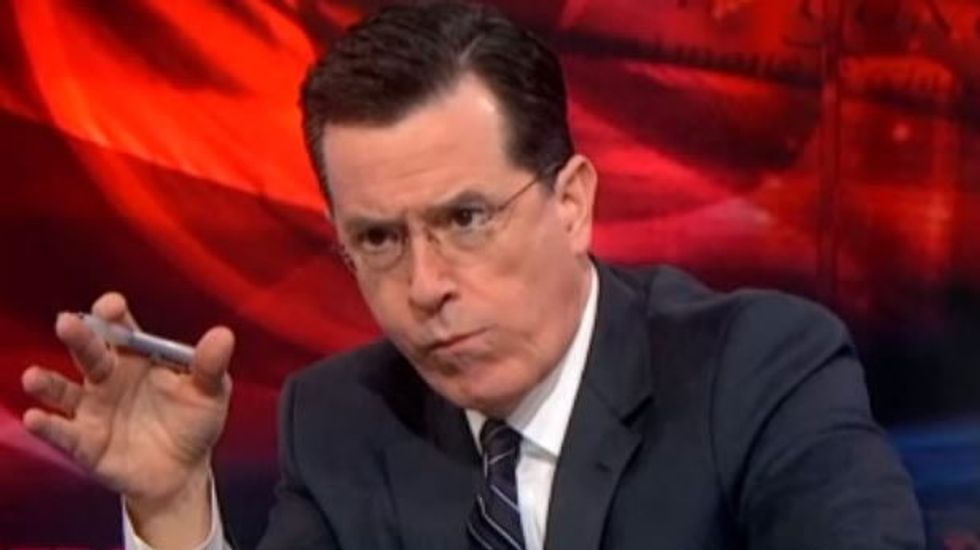 On last night's Colbert Report, Stephen Colbert began by reminding his audience that he's the nation's more prominent Catholic. "My faith is so strong," he said, "doctors have actually called it a Messiah complex."

"I'm also America's foremost capitalist," he continued. "I love the Invisible Hand of the market so much, I let it get to third base." Which is why he was disturbed to learn that Pope Francis had called capitalism "a new tyranny" predicated on "the idolatry of money."

"I would never worship money," Colbert argued. "The dollar isn't worth the paper it's printed on. That's why I've invested everything in golden calf futures."

"But as a Catholic," he said, "I try to give the Pope the benefit of the doubt, as does Bill O'Reilly."

After playing a clip from The O'Reilly Factor in which its host claimed to know that the Pope was not endorsing socialism when he recommended taking money from the "haves" and giving it to the "haves not." Colbert then played another clip in which an aghast panel on Fox Business News react to the news that the Pope has called on governments to "redistribute wealth to the poor."

"Son of a bishop!" he exclaimed. "The Pope is a socialist. In retrospect, I should have known: he lives in Europe, and he gives his employees a one-day work-week."

"So, either the Pope is wrong," Colbert said, "or God is a commie."

Watch the entire episode of The Colbert Report from Tuesday, May 13, 2014 via Hulu below.