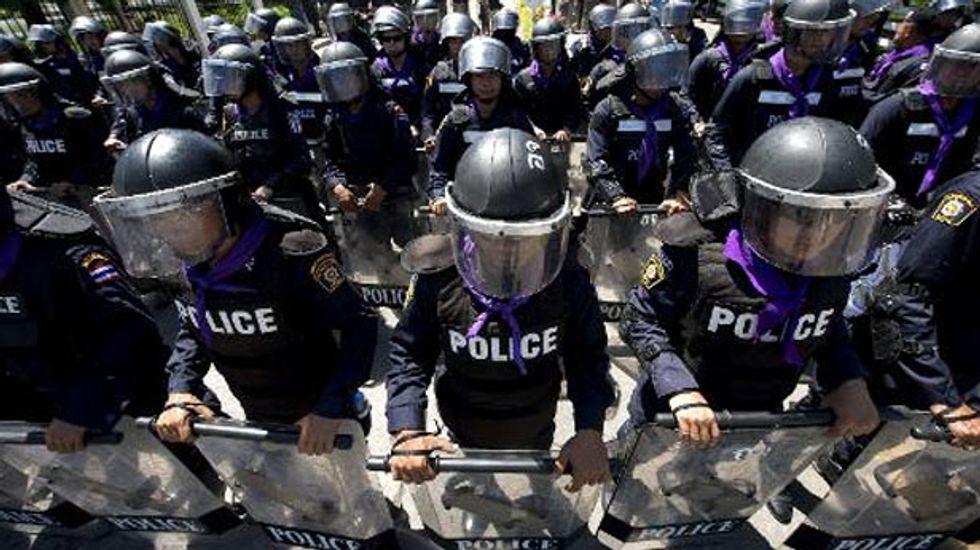 Thailand's army chief warned Thursday that the military may "use force" if political violence escalates in a six-month crisis which has left 28 people dead and hundreds wounded.

"I want to warn every group -- especially those who use violence and war weapons against innocent civilians -- to stop now because if the violence continues the military may be needed to come out... to restore peace and order," General Prayut Chan-O-Cha said in rare official statement.

He added his troops "may need to use force to resolve the situation" if it escalates, warning of "decisive measures" if civilians are hurt.

His comments come after three people died and more than 20 others were wounded early Thursday in a gun and grenade attack on an anti-government protest camp in Bangkok's historic heart.

Fears of civil conflict are also mounting, with rival groups of supporters massed in or around Bangkok.

Thailand's military has staged 18 successful or attempted coups since 1932, and supporters of the battered government say they fear it may act again as the political turmoil rumbles on.

In 2010, the military led a crackdown on pro-government "Red Shirts" gathered in Bangkok that left scores dead, hundreds wounded and parts of the city's commercial centre in flames.

Red Shirt leaders have warned of an imminent military coup in the ongoing crisis, while anti-government protesters have repeatedly urged the military to step in.

The army has been at pains to stay neutral in public during the current round of political turmoil.

Anti-government demonstrators want an appointed premier to replace the caretaker government which has limped on since Premier Yingluck Shinawatra was booted out of office by a court last week.

"This time the problem is complicated and has several dimensions," Prayut added in his statement.

Thailand has been politically split since 2006 when Yingluck's older brother Thaksin was ousted by a bloodless military coup.