Is this man trying to gaslight the Supreme Court? 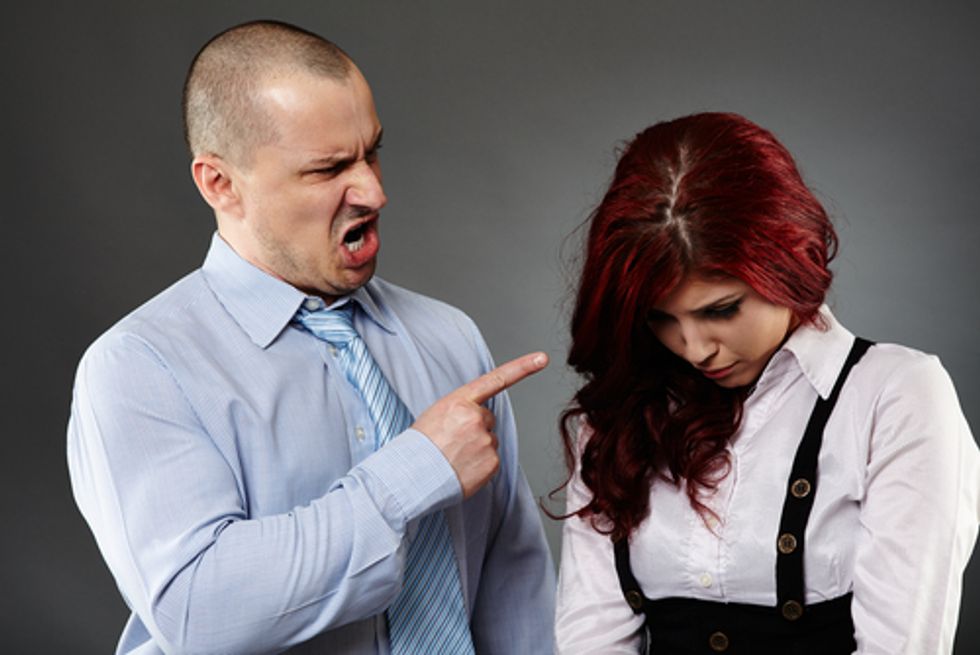 Stop saying I'm threatening you, or you'll be sorry!

I can't say I thought I'd see a day when an abuser would try to the favorite psychological tactic of abusers---gaslighting---in an argument in front of the Supreme Court. The Supreme Court agreed to hear the case of Anthony Elonis on the issue over whether or not threatening your wife with murder over Facebook counts as a threat if you employ some of the hand-waving excuses that are popular with abusers. Elonis was convicted for repeatedly threatening on Facebook to kill his wife--- as well as others, such as a female FBI agent and a classroom full of kids---for leaving him. Dahlia Lithwich has a sample of the kind of things he wrote:

In one post, Elonis wrote about smothering his wife with a pillow and dumping her body in a creek so it would look like a rape. In another he wrote: “There’s one way to love you but a thousand ways to kill you. I’m not going to rest until your body is a mess, soaked in blood and dying from all the little cuts. Hurry up and die, bitch, so I can bust this nut all over your corpse from atop your shallow grave. I used to be a nice guy but then you became a slut. Guess it’s not your fault you liked your daddy raped you. So hurry up and die, bitch, so I can forgive you.”

Unsurprisingly, Elonis seems to have a history of extremely weird and upsetting behavior:

Elonis exhibited what the government called "troubling behavior" at his work, including allegedly starting to undress in front of a female co-worker.

He was fired for posting a Facebook picture from a Halloween-themed event, where Elonis is holding a knife next to that co-worker, as part of the staged activities. The online caption read: "I wish."

So it's 100% understandable that the people he appeared to threaten on Facebook would be afraid, as his wife said she was. His argument, however, is that the only person who gets to determine how threatening a threat is should be the person issuing it:

At his trial, the jury was told that the legal standard for whether something is an unprotected “true threat” is if an objective person could consider Elonis’ posts to be threatening. Elonis claims that the correct test should look at whether he intended for the posts to be understood as threats. He also argues that his rap lyrics are important protected speech, no different from the rap lyrics created by the great artists. In his view the threatening and violent lyrics he was posting were emulating those of Eminem. (Elonis was careful to include some disclaimers among his writings, suggesting that this was all more art than threat, and also an act of First Amendment protest: “Art is about pushing limits,” he posted. “I’m willing to go to jail for my constitutional rights. Are you?”)

Gaslighting is a common behavior used by abusers in order to control their victims. It usually takes the form of lying to her, insisting that her memories and perceptions of your behavior are not real, even though you know that they, in fact, are. Like constantly insulting someone and putting her down and then, when confronted with it, saying, "Oh, that wasn't an insult. You're just too sensitive."

What's interesting here is that gaslighting is now being used as a legal tactic. The posts  sure do read as threats meant to frighten and intimidate---and a jury, when asked to consider them in that context agreed---but when confronted, he swears that they're not, pulling this bullshit "rap lyrics" excuse out. (Some gaslighters try to see how far they can push the envelope, how obvious they can be with their bullshit and still get away with it, mainly to get that rush of power that you get being able to force people to submit to obvious lies. This seems like an example. Elonis is not a rapper, does not perform as one, and his wife says that he doesn't even listen to rap music.) Gaslighting is why we can't locate the definition of a threat inside the brain of the person issuing it. Most abusers are fairly good about lying when called out and the odds that many will admit they are trying to scare and control people with threats are pretty damn low in most cases.

Unfortunately, just because a gaslighter is being blatantly obvious in the eyes of a reasonable person doesn't mean that he won't have his defenders. It's not uncommon for sexists to immediately join in on any gaslighting they see being employed to control and abuse women. Take, for instance, how sexual harassers gaslight to defend themselves. "It was just a compliment! Women are so oversensitive!" they will lie, knowing full well that the actual interaction was an attempt to make their target feel uncomfortable, possibly to punish her for being unobtainable. Even though they know and we all know for a fact that sexual harassment is not flirting, the sexual harasser can depend on a stampede of men (and some women) rushing to defend him, claiming, in total bad faith, that they believe that leering, pestering, and deliberately trying to make women uncomfortable counts as "flirting". Gaslighting is often a group sport.

Let's hope that kind of madness doesn't overtake the Supreme Court, but I fear the combination of sexism and a sense that the internet isn't "real" will probably make it hard to get five whole justices to see that trying to scare and control people from afar by threatening them on social networks is beyond the bounds of free speech, because it is a direct attack on their freedom of movement and association, by making them afraid to leave the house or go about their business.