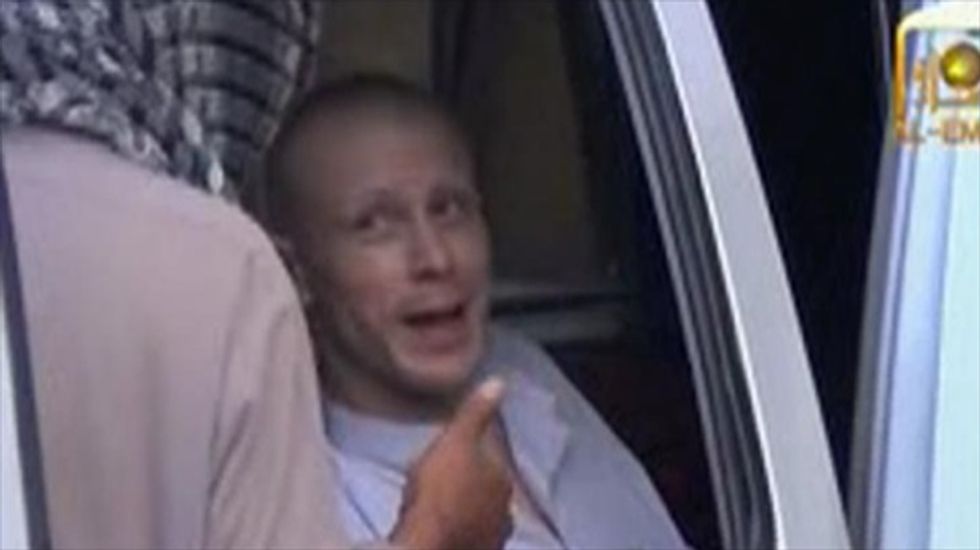 By David Alexander and Phil Stewart

KABUL (Reuters) - The political uproar over the prisoner swap that won the release of U.S. Army Sergeant Bowe Bergdahl from Taliban captivity intensified on Wednesday when his hometown canceled plans for a rally celebrating his return amid allegations that he deserted.

The Taliban released video of their handover of Bergdahl to U.S. special operations forces in eastern Afghanistan near the Pakistan border on Saturday, showing the U.S. soldier seemingly dazed and anxious about the unfolding events.

Bergdahl's release after being held for nearly five years in Afghanistan provoked an angry backlash in Congress among lawmakers over the Obama administration's failure to notify them in advance. Some of Bergdahl's former comrades have charged that he was captured after deserting.

Heather Dawson, the city administrator of Hailey, Idaho, said that town officials had called off their June 28 rally to celebrate Bergdahl's release because they would be "unable to safely manage the number of people expected."

The small mountain community had been under pressure to cancel after claims by some of Bergdahl's former Army comrades that he had deliberately abandoned his post.

That anger helped fuel congressional criticism of the Obama administration's handling of the deal to free Bergdahl in exchange for the transfer of five senior Taliban members from Guantanamo prison in Cuba to Qatar, where they were to remain for a year.

Senate Majority Leader Harry Reid accused critics of the agreement of seizing upon what should be a moment of unity to "play political games," but Senator John McCain, a top Republican who was a prisoner of war in Vietnam, condemned the deal.

"This was clearly a terrible idea," he said. "These are the hardest of the hard core."

U.S. lawmakers complained that the Obama administration did not give Congress 30 days notice required by law before transferring Guantanamo prisoners. They also expressed concern that the five were senior leaders who may return to the fight.

Defense Secretary Chuck Hagel called Bergdahl's family on Wednesday for the first time since his release, speaking with them for about 10 minutes. He assured them the Pentagon's focus was on their son's health and return to his family, a senior official said.

The White House, surprised by the angry backlash, has taken steps to try to address congressional ire over its failure to give lawmakers proper notice, offering apologies and briefings. But they have also expressed frustration over the reaction.

"It’s been disappointing to see the politicization of the United States military’s mission to leave no man left behind," one Obama administration official said, speaking on condition of anonymity.

Hagel said critics should wait for all the facts to be known before rushing to judgment on Bergdahl.

"We have no idea what they were thinking," one Democratic lawmaker said.

Administration officials said they decided the notification issue did not apply in Bergdahl's case because of the need to act quickly because of his deteriorating health, the suddenness with which the deal came together and the need for secrecy.

A U.S. intelligence analysis of videos of Bergdahl during his captivity taken in 2011 and 2013, and other intelligence, indicated that his health had deteriorated substantially over that period, one U.S. official said on condition of anonymity.

The official said that was one of the drivers of the decision to push ahead with an exchange.

It also followed Obama's announcement last week that virtually all U.S. forces would be out of Afghanistan by the end of 2016, ending more than a decade of engagement prompted by the al Qaeda-led Sept. 11, 2001 attacks on the United States.

The Taliban video showed a Blackhawk helicopter landing in a barren valley in eastern Afghanistan. As a handful of U.S. special operations troops got out, two Taliban approached, one holding a makeshift white flag of truce and the other leading Bergdahl.

The American team stepped briefly forward, exchanged a greeting and then led Bergdahl back to the helicopter, quickly searching him before putting him aboard, the video showed. The transaction lasted less than a minute.

Bergdahl disappeared from his outpost in Afghanistan on June 30, 2009, leaving behind some of his gear.

One person familiar with the U.S. military’s investigation of his disappearance said it concluded he walked off the base, but it was not able to determine with certainty that he deserted.

General Raymond Odierno, the Army chief of staff, said on Wednesday the Army would conduct a full review of his capture at the appropriate time.

The State Department said it would look into reports by the Associated Press that the family of an American woman who disappeared in Afghanistan in 2012 with her Canadian husband had received two videos of the couple last year asking the U.S. government to help win their release from the Taliban.

Caitlan Coleman was pregnant at the time of her disappearance along with her husband Joshua Boyle, the AP said. The family decided to make the videos public in light of the publicity surrounding Bergdahl's release.

[Image: U.S. Army Sergeant Bowe Bergdahl (R) talks to a Taliban militant as he waits in a pick-up truck before his release at the Afghan border, in this still image from video released June 4, 2014. REUTERS/Al-Emara via Reuters TV]