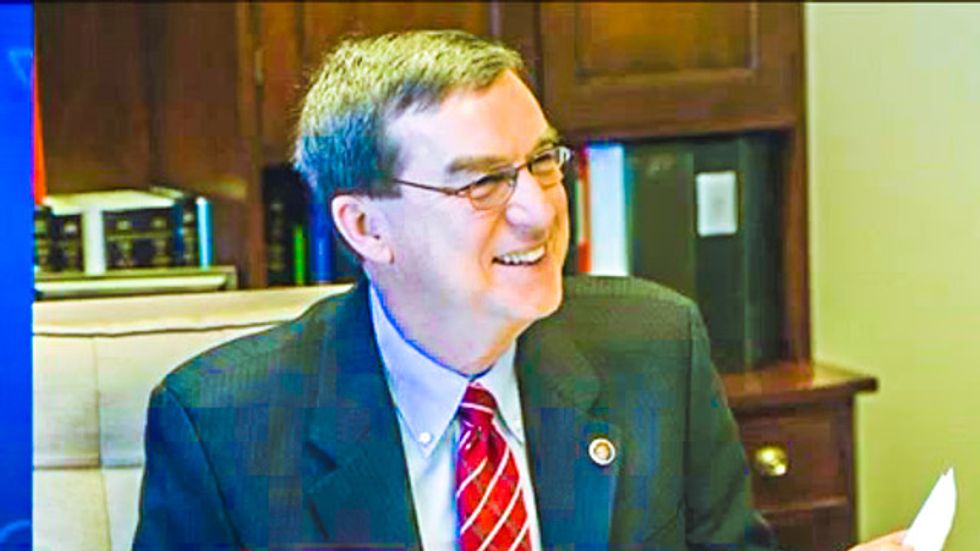 A Democratic state senator is expected on Monday to announce that he is resigning, allowing Republicans to take control of the Virginia Senate after they promised important jobs to him and his daughter.

Sources told The Washington Post that Democratic state Sen. Phillip P. Puckett was expected to become deputy director of the state tobacco commission, and his daughter was expected to eventually get a judgeship in exchange for his resignation.

The resignation came as Democratic Gov. Terry McAuliffe was in a bitter battle with Republicans to leverage the Affordable Care Act to expand the state's Medicaid health care program for the poor. With Republicans holding 20-to-19 majority in the state Senate, McAuliffe's Medicaid expansion plan would be considered doomed.

The Huffington Post called the deal with Puckett "outright bribery."

"It’s astounding to me. The House Republican caucus will do anything and everything to prevent low-income Virginians from getting health care," Del. Scott A. Surovell told the Post. "They figure the only way they could win was to give a job to a state senator."

“At least they can’t offer Terry McAuliffe a job. I hope Terry continues to stand up to these bullies.”

Republican Del. Terry G. Kilgore, who was expected begin the process of appointing Puckett to the tobacco commission this week, denied that a job had been offered in exchange for the resignation.

“If he’s available, we would like to have him because of his knowledge of the area, and he formerly was on the tobacco commission for years, and he knew what we’re about,” Kilgore said.

Earlier this year, the state Senate declined to confirm Puckett's daughter, Martha Puckett Ketron, to the Juvenile and Domestic Relations District Court, where she has been temporarily serving as a judge.

If Republicans take control of both chambers of the legislature, McAuliffe will have to veto a GOP-passed budget to force lawmakers to consider his Medicaid expansion proposal.

“I am deeply disappointed by this news and the uncertainty it creates at a time when 400,000 Virginians are waiting for access to quality health care, especially those in Southwest Virginia,” McAuliffe said in a statement. “This situation is unacceptable, but the bipartisan majority in the Senate and I will continue to work hard to put Virginians first and find compromise on a budget that closes the coverage gap.”