David Petraeus: U.S. must not be Iraq 'air force for Shiite militias' 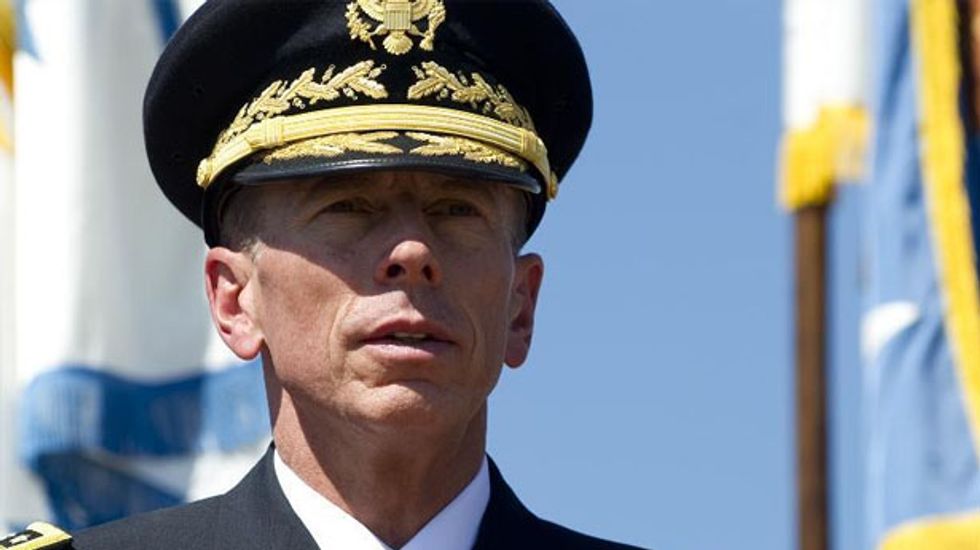 The man who led the US troop surge that preceded Washington's exit from Iraq after a costly eight-year war says there should not even be US air support without major change in Baghdad.

The comments from General David Petraeus, who commanded US troops in Mosul -- Iraq's second city which fell to jihadists last week -- during a long military and intelligence career, came as the Shiite-led government in Baghdad formally asked for air support.

Petraeus made a name for himself during the Sunni Arab insurgency that followed the US-led invasion of 2003 for questioning policies that he said risked fanning the resentment of the minority community that dominated Saddam Hussein's regime and all previous governments in Baghdad.

Petraeus warned that Washington risked becoming an "air force for Shiite militias", if it agreed to the request for support from Shiite Prime Minister Nuri al-Maliki, after the militants swept down from Mosul through a swathe of mainly Sunni Arab territory north of Baghdad.

The former top general and Central Intelligence Agency chief said there needed to be a radical change of politics in Baghdad to reflect Iraq's multi-confessional, multi-ethnic make-up before any possibility of renewed US intervention should be considered.

"This cannot be the United States being the air force for Shiite militias, or a Shiite on Sunni Arab fight."

The Shiite-led government in Baghdad has been thrown into disarray by a 10-day-old offensive by Sunni Arab militants that has swept up a vast swathe of northern and north-central Iraq, including Mosul, a city of two million people.

Petraeus always warned during his service in Iraq, which began in Mosul, that the resentments of the Sunni Arab former elite needed to be addressed.

"If America is to support (Iraq), then it would be in support of a government against extremists, rather than one side of what could be a sectarian civil war," he told a conference in London on Wednesday.

Washington pulled out its troops from Iraq at the end of 2011, ending an intervention that cost some 4,500 US lives and billions of tax dollars.

President Barack Obama has come under mounting criticism from his Republican opponents in Congress that he rushed to complete the pullout to meet a campaign pledge, without protecting the US investment and without regard for the geopolitical consequences.

Officials said Wednesday that Obama had not ruled out any possible courses of action, including air strikes against fighters of the jihadist Islamic State of Iraq and the Levant who have spearheaded the offensive that has seen militants advance to the northern approaches of Baghdad.

"The only thing the president has ruled out is sending troops back into combat in Iraq, but he continues to consider other options," White House spokesman Jay Carney said.