Dr. Oz gets lambasted by Claire McCaskill. Now onto the rest of the weight-loss fraudsters. 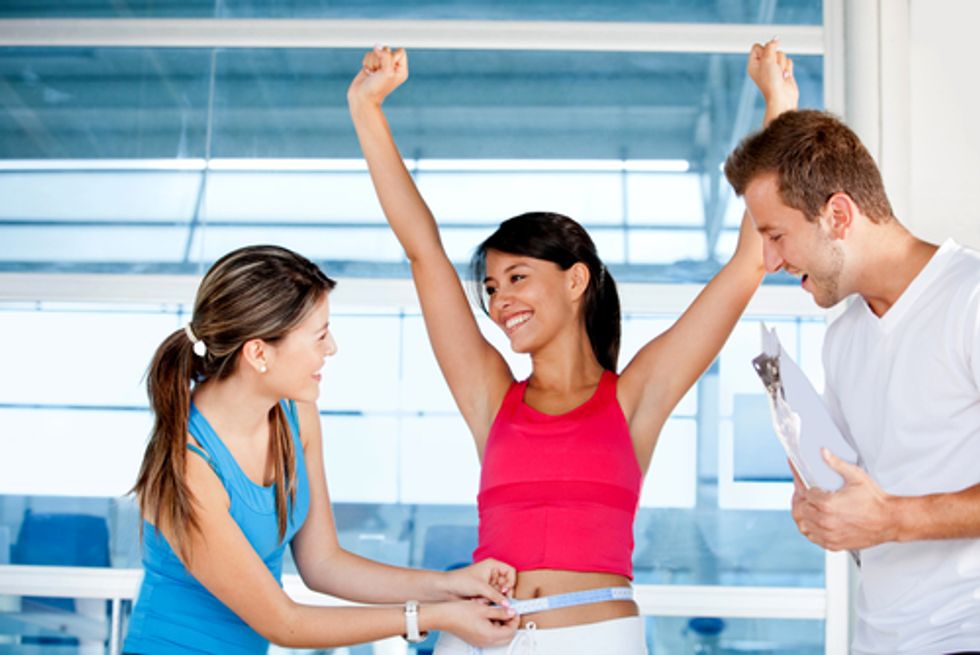 Yea! Let's pretend that all I needed to do was take the stairs once in awhile!

I cannot tell you how thrilled I was yesterday when Sen. Claire McCaskill finally got Dr. Oz in her sights. Dr. Oz may seem like a fun guy who just is overly obsessed with bowel movements on his show, but in reality he's a straight-up predator who uses his credentials as a medical doctor to scam a mostly female audience out of their hard-earned dollars by preying on their need to believe that they can lose weight and achieve conventional beauty standards without having to invest tons of time and energy---time and energy most do not have---into it. Dr. Oz shills for one "miracle" "fat-buster" after another, raking in money from desperate women, all while smugly pretending he's just a nice guy trying to give out medical advice. The fact that, as Dave Weigel notes, low income women who have poor access to decent medical care tend to turn to TV for advice just makes the whole thing even more disspiriting. So that's why it's fun watching Sen. McCaskill rip this fraud a new one.

The prevalence of weight loss scams, which are assuredly one of the biggest consumer fraud markets out there, demonstrates succiently why the growing importance of feminism to the skeptical movement is a good thing, even if it interferes with a few sexual harassers who see conventions as hunting grounds for prey. (Aw, poor harassers! They are very butthurt.) The reason that people, mostly women, turn to these fraudulent products again and again is that they are trapped in this unwinnable situation, where you are both supposed to be skinny and "hot" but also not supposed to work too hard at it. I was perusing CreepyPMs on Reddit this weekend, like you do, and saw yet another example of this:

The fact that she felt the need to defend herself at all makes me sad. This guy was clearly just being a dick, but you definitely see, over and over again, that there's this myth that being a supermodel is really easy and just a matter of a modicum of self-control and the very occasional amount of exercise. Jezebel reported on a study in Canada, for instance, that showed that when they put sedentary people on a treadmill, most of them wildly underestimated how hard they had to work to get to the "vigorous" level.

Part of the problem is there is an entire industry geared towards pushing the fantasy that weight loss or weight maintenance is super easy and that anyone who can't achieve it must just be lazy. I generally find Tori Spelling repulsive, but I did appreciate her coming clean about how she caved into pressure to lie about her regime when it came to losing weight after having a baby.

The mom of four told Us in April 2013 that she had dropped the weight through a combination of low-impact cardio and a "healthy" diet of fish, veggies, soups, and "sensible" snacks like rice cakes, edamame, hummus, and avocado. However, in Spelling It Like It Is, she confesses that she actually lost it by basically starving herself.

"I really don't exercise much, period," she writes. "So I took off my weight the old-fashioned way. I like to call it the Just Keep Your F--king Mouth Shut and Eat Air diet. It's all the rage."

Spelling says she lied because she thought the truth wouldn't go over well with her fans. "My publicist had given me clear instructions about what to say about my weight loss," she explains in her book. "Women didn't want to know that I had lost weight through dieting, not exercising. I didn't want to be the a--hole who didn't work for it. So I said that I swam. It was sort of a bad choice. I can't do much more than a doggy paddle."

And, of course, the exercise that is peddled as all you "need" to do in order to lose dozens of pounds is a little hopping around or light bicycling---can't sweat so hard your make-up runs, ladies!---and the result is that you have a nation of women who have been told that if they can't stay thin while eating heartily and doing nothing more than light exercise, then there must be something wrong with them. Add to it the unfortunate scientific realities that show that major weight loss leads to drastically lowered metabolism that makes keeping it off nearly impossible. Also toss in the fact that many Americans just don't have the time and energy to devote to diet maintenance and fitness. Put it all together, and the weight loss supplement industry has a perfect victim pool of people desperate to know the "secret".

So it's very good to see Dr. Oz being raked over the coals in front of a national audience for this. I hope to see more of this sort of thing in the future.