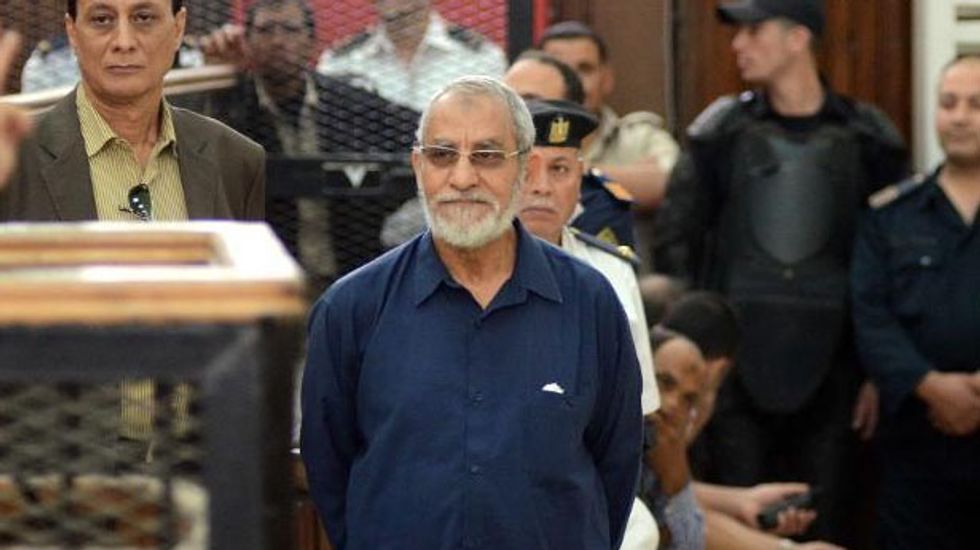 An Egyptian court sentenced Muslim Brotherhood chief Mohamed Badie and 13 others to death Thursday over violence that killed 10 people in Cairo last summer.

Since the army ousted Islamist president Mohamed Morsi in July, hundreds of his supporters and Badie himself have been sentenced to death in speedy mass trials that have sparked international outrage.

The court is due to meet again on August 3 to give a final ruling.

Death sentences in Egypt are referred to the country's top Islamic scholar for an advisory opinion before being ratified and courts may commute sentences, which can later be challenged in an appeals court.

They were convicted of inciting violence that killed 10 people near Al-Istiqama's mosque in the Giza neighbourhood, days after Morsi's July 3 ouster.

Since Morsi's ouster, his supporters have staged regular protests calling for his reinstatement, rallies that have often degenerated into street clashes with security forces and civilian opponents.

A crackdown on Morsi supporters has left more than 1,400 people dead in street clashes and at least 15,000 jailed.

In April, a court in the central city of Minya sentenced Badie, who is being tried in some 40 cases, and around 700 alleged Morsi supporters to death over the murder and attempted murder of policemen. A final ruling is expected on June 21.

The same court in March handed down the same sentence for 529 alleged Morsi supporters on similar charges. The judge subsequently upheld only 37 of those sentenced and commuted the rest to life in prison.

Morsi himself is detained and on trial in several cases.

Along with Badie, Beltagui and Erian, who are all in custody, he is being tried for mass prison breaks and attacks on police during the 2011 uprising that toppled strongman Hosni Mubarak.

Morsi also faces charges of espionage in collaboration with the Palestinian Islamist movement Hamas, and is on trial for inciting the killing of opposition protesters in December 2012 outside the presidential palace.