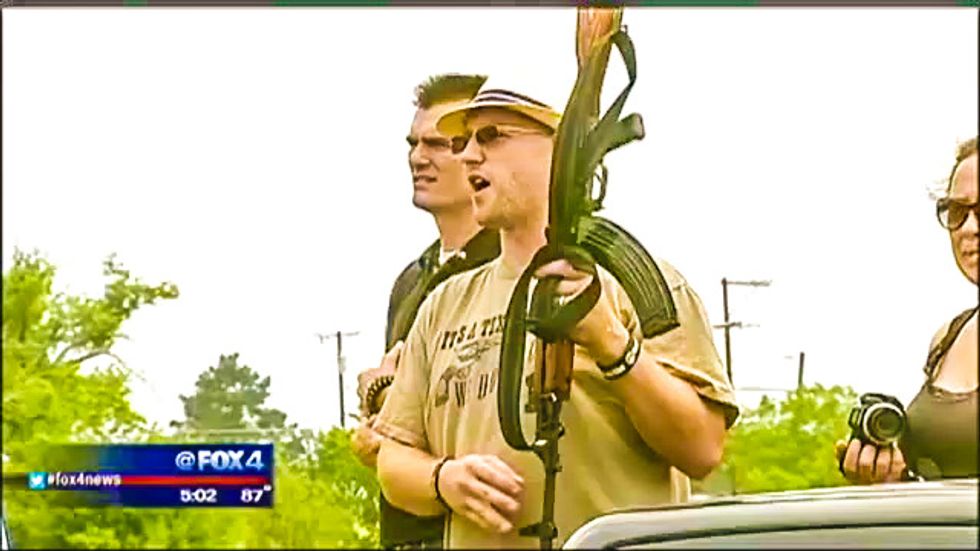 A controversial Texas gun group has called on activists make the Texas Republican Party convention the next front in their battle for the right to openly carry assault-style rifles as many places as possible.

Last week, the gun-rights group Open Carry Tarrant County sued City of Arlington for changing a city ordinance that made it more difficult for its members to approach motorists with pocket-sized copies of the Constitution while they were carrying rifles.

In a recent Facebook posting, the group attempted to call attention to its cause by organizing Republican delegates to bring long guns and black powder revolvers to the Texas Republican Party convention later this week.

“All delegates, I urge you to open-carry the whole time,” Open Carry Tarrant County coordinator Kory Watkins wrote. “I will be a delegate with my AK 47. Thomas Jefferson would be proud.”

City officials, however, pointed out that guns would not be welcome in the Fort Worth Convention Center as long as alcohol was being served.

“With this type of TABC license, the only type of weapon allowed into an establishment is concealed-carry and those on licensed peace officers,” Fort Worth director of public facilities and events Kirk Slaughter told the Star-Telegram. “The license doesn’t allow bringing in guns other than those that are licensed.”

Republican Party of Texas Chairman Steve Munisteri noted that 1995 law permitted concealed handguns, even if the legislature had not yet legalized openly carrying rifles in establishments that sell alcohol.

“We expect to have people there carrying weapons,” Munisteri explained. “It’s a Republican crowd and that’s a crowd that’s used to people packing.

“If the city and the convention center leave it up to us, we will allow open carry and, of course, anyone with a concealed-carry license.”

But even if the city does not allow Watkins and other gun activists to bring their AK-47s into the convention center, they plan on displaying them outside the building.

Pastor Terry Holcomb, who is president of Texas Carry and a delegate from San Jacinto, said that the plan was to force the legislature to change the law.

“We’re trying to continue the pressure on the issue,” he said. “We’re hoping to get lawmakers’ attention by open-carrying during the convention.”

Over the weekend, more than a 100 members of Open Carry Tarrant County showed up at Home Depot parking lot in North Richland Hills to protest the City of Arlington's rules about approaching motorists.