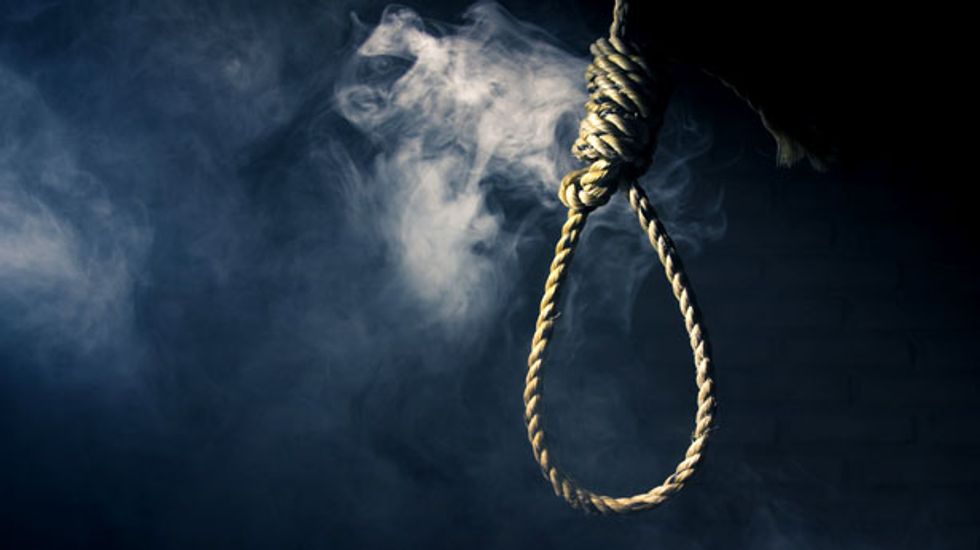 Ebrahimi, who shot dead her hubsand while he was sleeping, faces imminent execution, despite international laws prohibiting execution for crimes committed by juveniles.

"I married our neighbour's son when I was only 14 because my dad insisted," Ebrahimi was quoted as telling officials working on her case, according to Mehr. "My dad insisted I should marry him because he was educated and was working as a teacher. I was 15 when I gave birth to my child." Her child is believed to be now six years old.

"I didn't know who I am or what is life all about," she said soon after being arrested. "My husband mistreated me. He used any excuse to insult me, even attacking me physically."

Ebrahimi is said to have admitted to killing her husband with his own gun before burying him in the garden. Ebrahimi initially told the police her husband was missing but her own father found the dead body and gave her in to the police.

Iran is signatory to the international convenant of civil and political rights (ICCPR) which prohibits death penalty for convicts if their act of crime is committed while they were under the age of 18.

HRW called on the judiciary, which is independent of the Iranian government, to reverse its decision.

"Every time an Iranian judge issues a death sentence for a child offender like Ebrahimi, he should remember he is in flagrantly violating his legal responsibilities to administer justice fairly and equitably," said HRW's Joe Stork. "Iran's judiciary should reverse its execution order of a battered child bride."

In April an Iranian mother pardoned the man who had killed her sonjust moments before he was to be executed. Samereh Alinejad's act of forgiveness, has since inspired dozens of other families across Iran to pardon convicts at last minute.

Iran's judicial authorities have previously denied accusations of juvenile executions, but according to HRW, the country has executed at least 10 juvenile offenders since 2009.

The dispute appears to arise from Iran's own definition of a juvenile. The country does not provide a clear distinction between the age of majority – when minors cease to legally be considered children – and the minimum age of criminal responsibility, which is 15 for boys and nine for girls under Iranian law. Under the current civil code, girls can marry at 13 and boys at 15, HRW said.

In 2013, Iran and Iraq were responsible for more than two-thirds of the executions that happened worldwide, according to Amnesty. Iran says most of its executions are related to drug-offences.

"Forced girl marriage in Iran is a hidden social and legal issue," she said. "However, it should be noted that Maryam Ebrahimi's case is not a unique case at all. This March, for instance, Farzaneh Moradi, 28, was executed for murdering her husband. She was forced to marriage at 15, gave birth at 16, fell in love with another man at 19 and was accused of murdering her husband at 20."

She added: "Women such as Maryam or Farzaneh, who are forced to marriage at childhood, are actually being raped constantly under the name of marriage. While they should go to school at that age, they are instead experiencing a life full of violence with no legal support. They eventually kill themselves or their husbands to end this vicious circle."

[Image of a hangman's noose on Shutterstock]

Legal experts: Trump attorneys may throw him under the bus after DOJ moves to hold them in contempt

The Justice Department is asking a federal judge to hold former President Donald Trump's legal team in contempt of court for failing to comply with a subpoena issued this summer ordering him to return all classified documents in his possession, sources told The Washington Post.

U.S. District Court Judge Beryl Howell has not yet held a hearing or ruled on the DOJ's request, which came months after Trump's lawyers assured the department that a search had been conducted for classified documents at his Mar-a-Lago residence, before the FBI later executed a court-authorized search that led to the discovery of more than 100 documents marked as classified. Trump's team recently reportedly found two additional items marked classified at a Florida storage locker after Howell ordered them to keep looking.

Animal rights group PETA said Friday it is taking legal action against the UK defense ministry over its refusal to test a fake fur version of the distinctive bearskin hats worn by ceremonial guards.

The tall black hats are worn by the elite regiments, including for the Changing of the Guard ceremony outside Buckingham Palace, and are one of the best-known symbols of the UK.