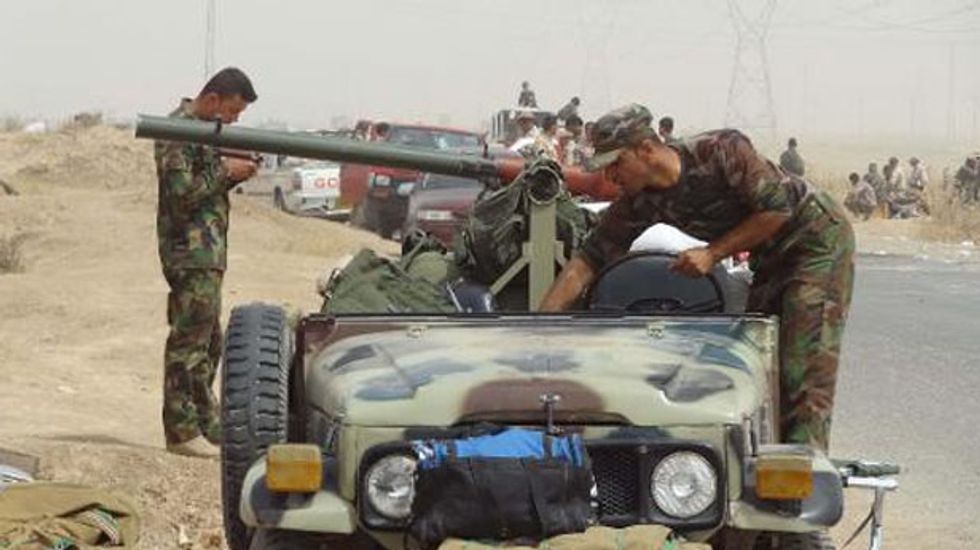 A major offensive by jihadists is allowing Iraqi Kurds to take control of disputed territory that Baghdad has long opposed them adding to their autonomous northern region.

With federal forces abandoning their posts, Kurdish forces, known as peshmerga, are filling the vacuum in some areas -- defending them from the militants but also putting them under Kurdish control.

Jihadists and their allies have overrun all of the northern province of Nineveh and significant areas of neighbouring Salaheddin and Kirkuk provinces, as well as part of northern Diyala, in an offensive that began Monday night.

All four provinces contain territory claimed by both the federal government and the three-province Kurdistan region, which has its own borders, security forces and government but is financially dependent on Baghdad.

On Thursday, Kurdish forces took control for the first time of the oil hub of Kirkuk. The city is at the heart of the swathe of territory the Kurds want to incorporate into their region.

"We tightened our control of Kirkuk city and are awaiting orders to move toward the areas that are controlled by ISIL," peshmerga Brigadier General Shirko Rauf said, referring to jihadist group the Islamic State of Iraq and the Levant.

Kirkuk Governor Najm al-Din Karim, himself a Kurd, said peshmerga were filling in gaps left by federal troops who withdrew from their positions in the province.

"Army forces are no longer present, as happened in Mosul and Salaheddin," Karim said, referring to the first city to fall in the offensive and another province where militants have gained significant ground.

Kurdish leaders have long wanted the army out of Kirkuk province, and vehemently opposed the establishment of a federal military command that included it.

In a statement on the Kurdistan government's official website, peshmerga ministry secretary general Jabbar Yawar criticised federal security personnel as being "only interested in collecting their salaries," and said Baghdad had been warned they would not hold up.

“Peshmerga forces are in control of the majority of the Kurdistan region outside of (Kurdistan Regional Government) administration," Yawar said, referring to the disputed areas.

John Drake, a security analyst with AKE Group, said the crisis could aid the Kurdish region in the territory dispute.

It "could end up gaining further control over territory disputed with Baghdad by bolstering its security forces around places such as Kirkuk and Tuz Khurmatu," he said, referring to a disputed northern town that Kurdish forces have reinforced.

He noted that the Kurdistan region "would not face the same challenges from Baghdad as in the past because the federal authorities are evidently in an extremely poor position to do anything about the situation."

Iraqi security forces have not performed well so far, with some throwing away their uniforms and abandoning vehicles and positions to flee the militants.

Asos Hardi, a journalist and analyst, said Kurdish forces moving into areas vacated by the army "gives them a better and wider control (of) the disputed areas."

- Speechmaker in line of fire -

Moving into these areas ultimately puts Kurdish forces in the line of fire.

This risk was demonstrated on Thursday when a roadside bomb targeted Jaafar Mustafa, the Kurdish minister responsible for the peshmerga, as he returned from inspecting units in Kirkuk province.

Mustafa survived the blast, which took place west of Kirkuk city, but it killed a peshmerga fighter, Rauf said.

The presence of jihadists in provinces that neighbour the Kurds' autonomous region also carries economic risks.

Drake noted that "the fact a major Islamist organisation has now established a presence right on (Kurdistan's) doorstep will be a major source of concern for would-be investors and local residents alike."

Hardi said that if militants succeed in controlling Sunni Arab areas of the country, "this will divide Iraq, practically, into three different parts."

It is "a very dangerous situation... not only for Kurds, but for all Iraq," Hardi said.