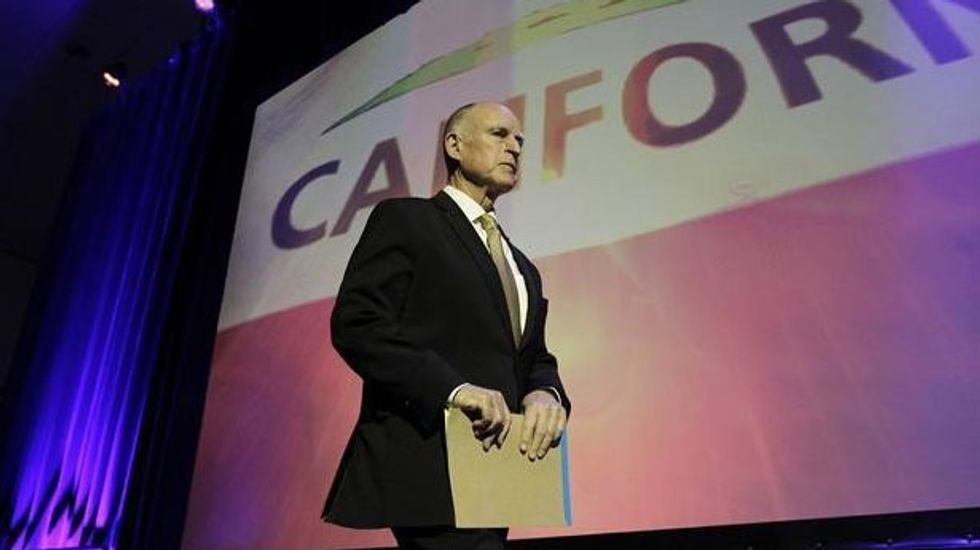 SACRAMENTO Calif. (Reuters) - Democratic California Governor Jerry Brown, seeking an unprecedented fourth term, beat out his nearest Republican competitor by more than 35 percentage points in Tuesday's primary in a race that highlights the shaky state of the Republican Party in the most populous U.S. state.

The open primary contest put candidates from both parties on the same ballot, and Brown barely dipped into his $21 million campaign war chest to lead the 15-person field.

The leading Republican was Neel Kashkari, a former Wall Street financier who helped run the federal government's bank bailout program during the financial meltdown. He put $2 million of his own money into his campaign and ended up squeaking past Assemblyman Tim Donnelly, an anti-illegal immigration activist and Tea Party favorite, to earn a chance to face Brown in November.

"Whatever candidate they pick, I don't think it makes any difference," said Brown, 76, using a discarded dresser as a podium as he addressed reporters outside of a polling place near his home in Oakland.

Democrats hold all statewide elective offices in California, and dominate both houses of the state legislature. The state Republican Party, near bankruptcy, closed its office in Sacramento for several months in 2012 and 2013, and candidates vying to run against Brown raised little money.

"My commitment is to rebuilding California’s middle class and re-energizing the Republican Party," Kashkari said in a statement on Wednesday.

The son of immigrants from India, Kashkari earned 19 percent of votes cast on Tuesday, more than Donnelly's 15 percent but far less than the 55 percent hauled in by Brown.

Kashkari had trailed Donnelly up until the last days of his campaign, when a rush of endorsements from mainstream Republicans and the infusion of his own cash for political ads pushed the moderate candidate ahead.

“With Tim Donnelly on the ballot, it would be a losing campaign, risking injury to our party and our state, and to other Republican candidates who deserve to win,” former Republican governor Pete Wilson said in a statement supporting Kashkari.

Donnelly, a member of the state assembly, is on probation for carrying a loaded gun into an airport in a Los Angeles suburb. He drew controversy during the campaign for saying Kashkari, whose family is Hindu, supported Islamic sharia law during the bank bailout.

He is a favorite of the party's Tea Party wing, drawing thunderous applause from delegates at the Republican state convention in March.

(This story was refiled to clarify headline)